Malaysia Goodson, a 22-year-old African-American mother, fell down the stairs in a New York City subway station while carrying her baby in a stroller on Jan. 28, 2019.   Her baby survived. She did not. 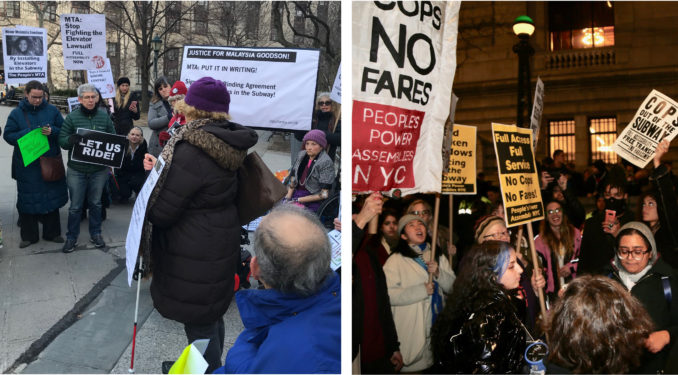 The hearts of millions of New Yorkers went out to Malaysia Goodson and her family. Anyone who has taken the city’s subways for over a month has either been in the same situation or witnessed or helped others struggling with steep, sometimes wet and icy stairs. This subway system is notorious for its lack of accessibility, with less than a quarter of its stations equipped with elevators and chronic breakdowns of the existing elevators.

Within 48 hours of Malaysia Goodson’s fatal fall, the hardest fighters for the installation of elevators — leaders in the disability rights community, many of them wheelchair users — acted.  They mobilized for a vigil and protest at the station where the young mother fell.

People with disabilities have been the most consistent force to remember Malaysia Goodson and show solidarity with her family. Public sentiment for Goodson was massive following her death.  However, it has been those daily oppressed by the Metropolitan Transit Authority — wheelchair users and others with disabilities who refuse to accept being locked out of the subways — who have been among the vanguard, along with her relatives, in keeping the young mother’s name alive.

One year after Malaysia Goodson’s death

This year, the same forces who organized last year’s vigil and protest, held a demonstration outside the New York State Supreme Court building on Jan. 28, in recognition of  the one-year anniversary of Malaysia Goodson’s death. The action was held there because the date coincided with a hearing on the historic subway elevator class-action lawsuit. The suit calls out the MTA for its lack of accessibility as a violation of the city’s Human Rights Law and demands the installation of elevators in every subway station.

These activists used the date to crystallize their demand that the MTA “put it in writing.”  In other words, the agency can’t just announce plans and promises for accessible subway stations, it must sign a legally binding agreement with a timeline that mandates the installation of elevators.

The Jan. 28 action was called by The People’s MTA, Rise & Resist, People’s Power Assembly-NYC, the Straphangers Campaign and the Brooklyn Center for the Independence of the Disabled.  Members of Disabled In Action, TransitCenter, UP-STAND, an advocacy group for pregnant women and families, and other organizations, participated.

Placards at the Jan. 28 action read: “We did not forget Malaysia Goodson” “MTA: Put it in writing” and “Elevators are for everybody!” Many sign slogans also reflected the growing anger at racist police terror on the trains, including “Our subways need $ for elevators, not more cops!”

After the demonstration, 50 protesters packed the courtroom.  Ten wheelchair users lined one end of the room. As determined as the MTA is to drown this case in lawyers and legal-wrangling, mobility impaired fighters for accessible public transportation are equally determined.  They have shown up for every hearing to protest outside the courthouse and then pack the courtroom.

Anger at the racist cops who serve Wall Street and corporate interests, and terrorize subway riders, boiled over into mass rebellions throughout the city on Jan. 31 for the third time since November.  The media dismiss the “FTP” protests as “vandalism.” But protesters’ militant tactics stand in stark contrast to going through “proper channels” in the courts.

Now in its third year, the legal case presents a just demand, yet it is crawling through the legal system. The Wall Street-backed MTA is stalling and delaying the provision of this vital public need by paying millions of dollars to the high-priced law firm of Paul, Weiss, Rifkind, Wharton & Garrison.

The Goodson case is an example of how public transportation — supposed to be a public service — becomes transformed under capitalism into an oppressive institution that is used to serve the rich and foster racist disregard for oppressed and working people.

One injustice after another

The MTA, a profit-making corporation, has lied, obfuscated and done everything to avoid providing working elevators in the subway system for years.

When Malaysia Goodson’s death resulted from their inaction, the MTA refused to even contact her family to offer sympathy or compensation. The officials hid behind a bogus medical examiners’ report that claimed she had a thyroid condition that made her fall. The report took five months to complete, but it was used to explain away the cause of the death in media headlines a mere two days after the needless tragedy occurred.

Even the local coverage of the Jan. 28 action referred to Malaysia Goodson as a rider “with medical problems.” Activist Colin Wright of TransitCenter answered this slander at the rally, covered by NBC’s local news that day: “No person with a ‘medical issue’ should be forced to use the stairs. If the subway system had been accessible, we think Malaysia Goodson would be alive today.”