The four American peace activists who protected the Venezuela Embassy in Washington, D.C., for 37 days during the attempted coup, spoke at The People’s Forum in New York City Jan. 24. The event was part of a speaking and fundraising tour by the four. Margaret Flowers, Kevin Zeese, Adrienne Pine and David Paul face trumped-up charges of “interfering with certain protective functions” of the government for their effort to prevent the transfer of the Venezuela Embassy to Juan Guaidó, illegally appointed president of Venezuela by the U.S. government. 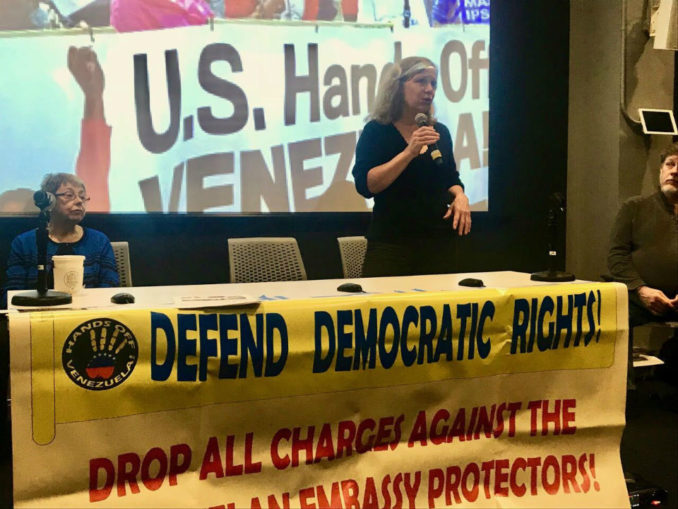 The trial will begin Feb. 11 at the federal courthouse in Washington. The four are each charged with a misdemeanor, with a maximum penalty of one-year imprisonment and $100,000 fine.

Sara Flounders, co-director of the International Action Center, and Margaret Kimberley, editor and senior columnist of Black Agenda Report, who are members of the Protectors’ Defense Committee, co-chaired the event. Flowers explained that the four stayed at the embassy to try to stop the U.S. from violating international law, noting the Vienna Convention states that embassies are inviolable. “We were there to try to hold that space while the U.S. and Venezuela negotiated for a mutually protecting power agreement.” She noted that when there is a breach in diplomatic relations between countries, they are to find a third country to be a protecting power for the embassy.