In conjunction with actions in the U.S. and internationally, some 50 anti-war activists demonstrated Jan. 25 in the Canalside district of the Buffalo harbor on Lake Erie. The activists called for an end to U.S. aggression against Iran and for U.S. withdrawal of all military personnel from the entire Middle East region. 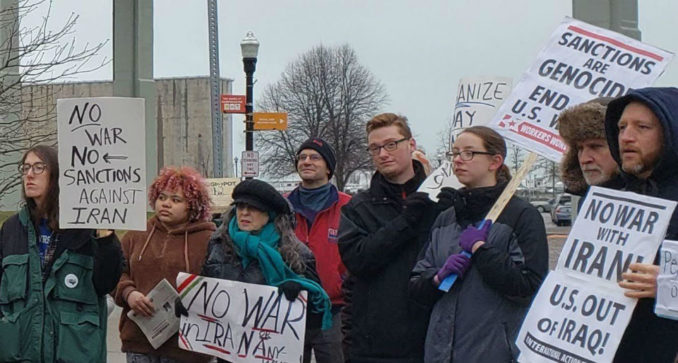 Protesters chanted “Iran wants peace, U.S. out of the Middle East,” “1 2 3 4, we won’t fight a rich man’s war” and “Not U.S. land, not U.S. oil, U.S. off  Iraqi soil!”  Several gave speeches against U.S. imperialism, the devastating repercussions of U.S. wars abroad for people at home and of the desire for peace that the people of Iran share with people in the U.S.

When protesters attempted to march around the block, they were intercepted by private security forces employed by LECOM Harborcenter, the property of natural gas billionaires, Terry and Kim Pegula. Activists were falsely informed that the Harbor sidewalk was private property and told to immediately step into the busy street.

While demonstrators attempted to determine if this was a legal order, a security guard pushed one protester, first into the street and then into a parked vehicle. The guard then began shouting at a National Lawyers Guild legal observer.

Several protesters intervened when the guard attempted to place the NLG observer in a headlock and finally freed them from the guard’s grasp. Around a dozen cars from the Buffalo Police Department soon arrived, including officers wielding billy clubs and lieutenants who ordered protesters out of the street and off the adjacent Metro light rail line.

In the end, no arrests were made, and the Buffalo AntiWar coalition is determined to continue demonstrating whenever and wherever necessary.