The report summarizes a treasure trove of data that has consistently shown sharp improvements in Beijing’s air quality over the past several years. These improvements accelerated after the central government declared a “war on pollution” in 2014. (tinyurl.com/r2q5o4m/)

The Western corporate media, which a decade ago showed endless images of Beijing’s smoggy skies and devoted plenty of coverage to what was dubbed the “airpocalypse,” are conspicuously silent now that blue skies are the norm in that huge city.

Yet the data speak for themselves. The steps China took provide a model for other cities, especially in the developing world, which are currently grappling with air pollution. China presents an environmental success story at a time when so much environmental news is negative.

Beijing’s efforts actually go back to 1998, when the municipal government launched several measures aimed at combating pollution. Since then, the annual average concentrations of sulfur dioxide have declined by 93.3 percent, nitrous dioxide fell 37.8 percent, and PM2.5 (particle matter with aerodynamic diameter of 2.5 microns or less) decreased 35.6 percent, with most decreases happening since 2013.

Beijing, like the rest of China, has also invested heavily in extensive public transit systems, which greatly reduce air pollution and provide an equally accessible form of transportation.

Meanwhile in Germany, often touted as a leading “green” capitalist country, emissions from the transport sector are 25 percent higher than in 1995. 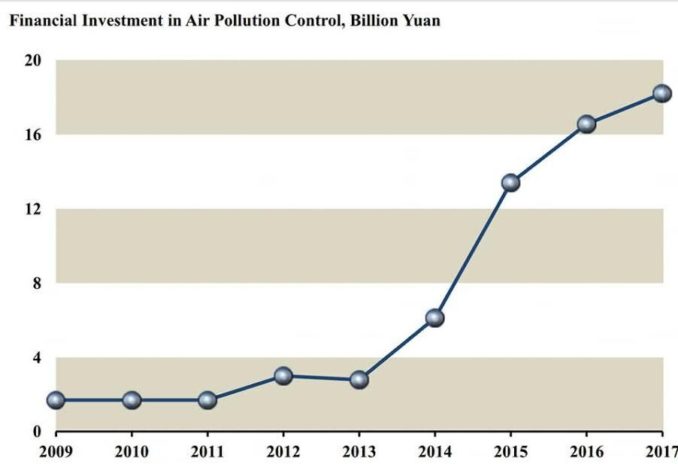 From 2009 to 2015, China built 87 mass transit rail lines in 25 cities, totaling 1,926 miles. In 2016 the government lowered the population threshold for cities to start planning metro systems — from 3 million to 1.5 million people — opening up many more cities for construction of subway systems and other forms of efficient passenger rail transit.

China also has the largest high-speed rail network in the world, with over 18,600 miles of track. This comes to more than the rest of the world combined!

Spending on the control of air pollution in Beijing increased from under 2 billion yuan in 2009 to 18 billion yuan in 2017. (The exchange rate is 1 yuan = 0.15 dollar.) The increase was especially rapid after 2013.

The city also invested in more numerous and more sophisticated air quality monitoring stations. Beijing now has 35 such stations, which can track six major pollutants, as well as over 1,000 sensors spread throughout all parts of the city that monitor concentrations of PM2.5.

Many varied policies, programs and subsidies

The policies and programs put in place to achieve these remarkable results are numerous and varied. They include subsidies to promote electric cars, subsidies for early retirement of older vehicles, and more stringent emissions standards for new vehicles. The local Beijing government also provides subsidies for solar panels and solar water heaters, as well as subsidies for residents to replace coal boilers with electric ones.

An environmental petition and complaint system was created, which includes a hotline and an online mailbox, plus incentives of up to 50,000 yuan per case, to encourage the public to actively report environmental violations.

The city formed the Beijing Public Environmental Ambassadors, a group of well-known media personalities and celebrities (such as former National Basketball Association player Stephon Marbury, who now lives permanently in China) who promote environmental awareness to the public. As a result, the proportion of Beijing residents who believe they have a responsibility to play an active role in environmental protection grew from 65 percent in 2013 to over 80 percent in 2017. And satisfaction with Beijing’s environmental quality of life increased from 42 percent in 2015 to 64 percent in 2017.

In Shunyi district, a women’s volunteer team with 8,000 members encourages women to participate in environmental efforts and supports their work. The team educates the public, for example, on the existence of subsidies for converting coal boilers to electric. They also engage in recycling programs to “turn waste into treasure.”

The women conduct inspections, and if they find facilities or behaviors that damage or pollute the environment, they work to persuade and educate people to correct their mistakes. The results of the women’s environmental volunteer team have been overwhelmingly positive, helping to engage the public more fully and actively in environmental efforts, says the report.

Listen to the people

Beijing’s extensive and successful environmental efforts began as a response to public pressure. Many people listed air pollution as one of their top concerns, and despite widespread approval of the government overall, they expressed dissatisfaction with the state of the environment.

In response, the government, from the local level all the way up to the national, rapidly put in place necessary measures to reduce pollution. This reality contrasts with what the Western media report about China — the false characterization of the country as an “authoritarian dictatorship” that couldn’t care less about the needs and wishes of its people, where people exist only to serve the state.

But the case of Beijing’s air pollution control success shows the opposite is true: The state exists to serve the people.

The Chinese revolution in 1949 succeeded in establishing a state based on the masses of workers and peasants and dedicated to building socialism – a huge task in a country impoverished by landlords, capitalists and foreign imperialist exploiters.

Over the past 70 years the leaders of the Communist Party have tried various approaches to serve the people and build up the economy while maintaining their socialist goals. By the end of this year China will have totally eliminated extreme poverty, uplifting over 850 million people in the process. And now it is successfully cleaning up the environment.

Meanwhile, in the U.S., the supposed land of freedom and democracy, there are actually more poor people than in China, according to the 2015 Credit Suisse Global Wealth Report — despite China having over four times the population and a less developed economy.

Cities like Los Angeles and Salt Lake City are disappearing under smoggy skies as the Trump administration rolls back environmental regulations, such as vehicle emission standards. Trump pulled the U.S. out of the Paris Climate Accords, all to benefit Big Business. Meanwhile, drinking water in many rural areas and in cities, particularly places like Flint, Mich., which have large numbers of Black residents and communities of color, is unsafe for humans due to pollution.

As China shows, life in the U.S. doesn’t have to be like this. Rapid and significant reductions in pollution can be achieved if the political will exists to fight the hold of Big Business over our lives.