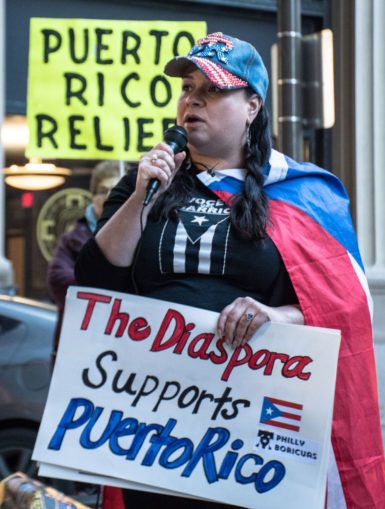 Demonstrators gathered in Philadelphia on Jan. 15 in front of the U.S. Department of Housing and Urban Development, Mid-Atlantic Region, with signs and Puerto Rican flags. Speaker after speaker criticized the Trump administration for refusing to allow $18 billion in post-hurricane aid to be sent to the U.S. island colony. Without citing a valid reason to deny the Congress-approved aid, Trump has delayed upgrades that would repair the island’s infrastructure, which was severely damaged by hurricanes Maria and Irma in 2017.

After recent earthquakes reaching 6.4 in magnitude in Puerto Rico, Trump finally lifted the hold on $8.2 billion in aid on Jan 14. Protesters were not satisfied and demanded that the whole $18 billion be released so the electrical grid, bridges, homes and businesses can be repaired and rebuilt.

— Report and photos by Joe Piette