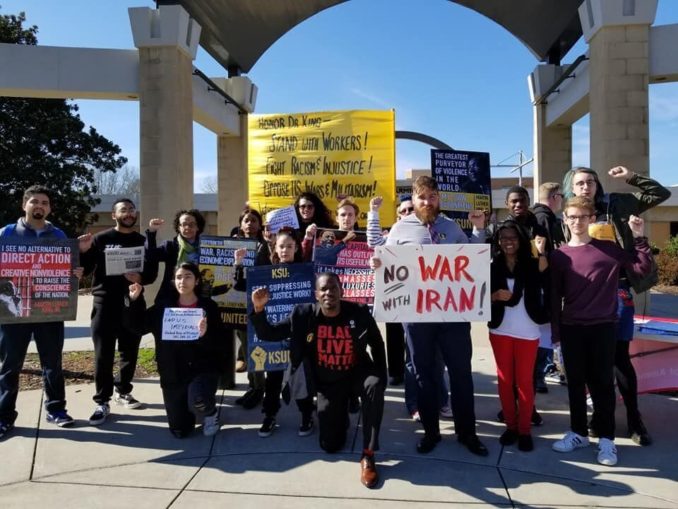 Students held a die-in, followed by an educational event, “Honoring MLK’s Legacy of Peace,” to highlight Dr. King’s true legacy of anti-militarism. KSUnited, Young Democratic Socialists of America-KSU and Students for Justice in Palestine were organizers of the events.

University officials on the way to the Legacy Luncheon at the Convocation Center were forced to step through the bodies of students holding signs exposing the damage to human life caused by Lockheed Martin and the U.S. military.

Students taped signs to their chests with factual information: “3% of U.S. military spending could end world hunger,” “Lockheed Martin is the largest weapons contractor on Earth,” “Lockheed Martin supplied weapons for the conflicts in Yemen and Syria” and “16,706 civilian casualties,” which represents the number of civilians killed in Yemen by U.S. weapons made by Lockheed Martin.

At the educational event, Dr. King’s “Beyond Vietnam” speech was read aloud. Flyers were distributed about the crimes committed by Lockheed Martin and on MLK’s anti-war philosophy. KSUnited handed out its demand that the administration return the organizing of MLK Week to Black students.

Prior to the protest, the sponsoring groups released a statement signed by various organizations, including the International Action Center, which read in part:

“It may seem honorable for KSU to recognize McLean’s achievements as a Black engineer who went to an HBCU, which represents Black success in an historically oppressive society. However, his standing as a keynote speaker at an MLK Legacy luncheon also represents KSU’s direct support of war, which opposes Dr. King’s message of nonviolence. King recognized the three major evils of society as racism, poverty and war. King stated: ‘The bombs in Vietnam explode at home; they destroy the hopes and possibilities for a decent America.’ MLK was an anti-racist, anti-capitalist and anti-war revolutionary, and to pick and choose aspects of his philosophies is a common tactic used by elitists to water down Dr. King’s legacy.”

Previously, Martin Luther King Week at KSU had been an event open to the metro Atlanta public on weekends, which brought revolutionary speakers like Angela Davis and Marc Lamont Hill to campus. KSU’s African-American Student Alliance controlled who spoke. After Davis delivered the keynote address in 2015, pressure from local Republican Party forces was followed by the KSU administration seizing control of MLK Week in 2016.

The week is now a private event with RSVP invitations, held during class and work hours on a weekday so that many students and outsiders cannot attend. Such privatization has led to people like military-industrialist McLean being invited to speak on MLK’s legacy.