The theme of the fourth annual Women’s March Global 2020 was “Women’s Rights Are Human Rights.” On Jan. 18, hundreds of thousands of women and people of all genders marched and rallied in at least 23 countries with various demands.

England’s march in London was linked to global protests that day, including in Chile and Ecuador, which denounced increasing economic inequality — just days before world leaders converge at the World Economic Forum in Davos, Switzerland. 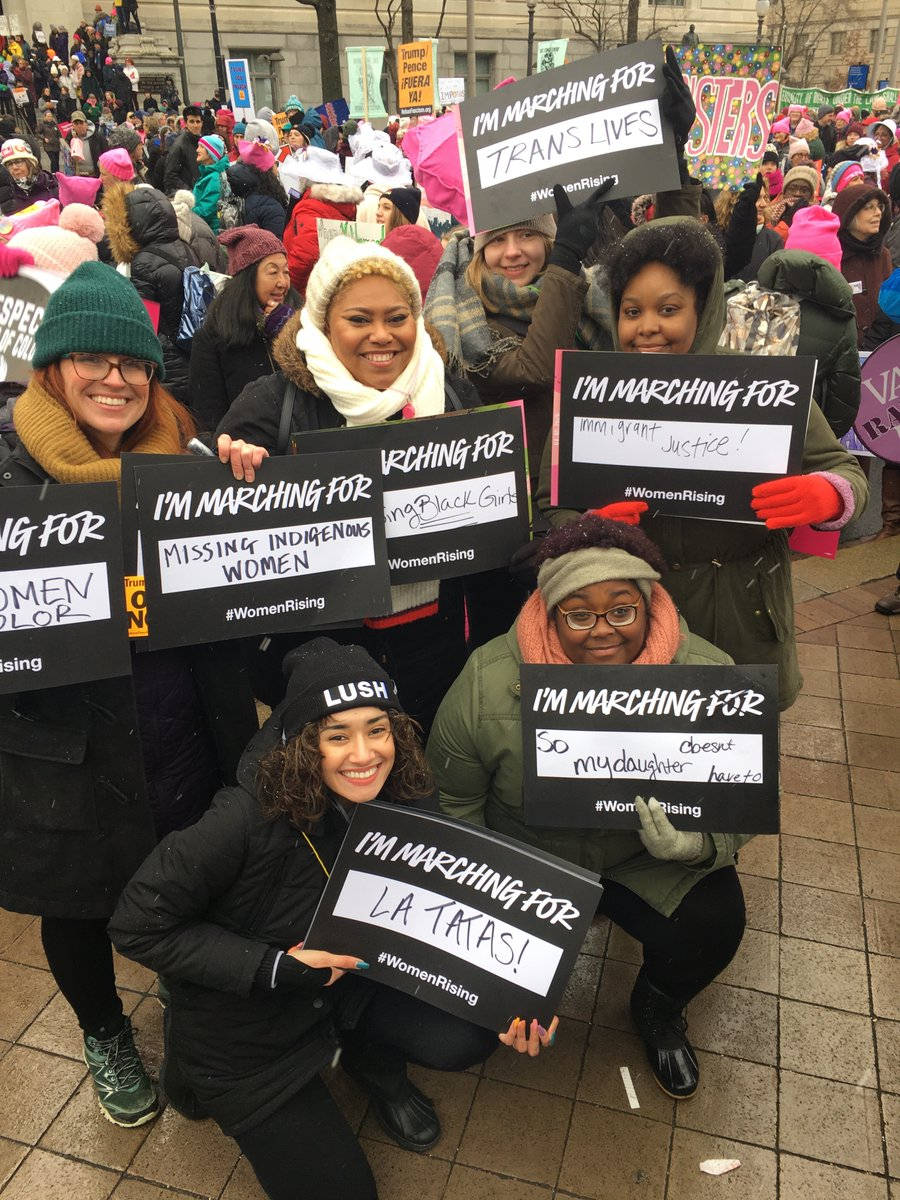 There were 250 events across the U.S. in small towns and big cities — from Massachusetts to Florida to California. Some 10,000 came out in Chicago and 3,500 in Austin, Texas. People traveled from around the country to the main demonstration in Washington, D.C.

For three years, the Trump administration has relentlessly attacked the rights of women, immigrants, people of color, low-income communities, workers, LGBTQ2+ people, individuals with disabilities and seniors. Racism, xenophobia, Islamophobia, misogyny, homophobia and transphobia have emanated from the White House.

The reactionaries in the administration and the right-wing politicians who align with them are scheming to slash supplemental food programs and are trying to undermine federal health care programs and disability benefits. Reproductive rights are being whittled away in many states, while the majority right-wing Supreme Court is ready to rule against legal abortion. Tens of thousands of migrants are being turned away at the Southern border with Mexico or are detained, separated from their families, their children caged and abused.

The tens of thousands of demonstrators in Washington raised three main demands: rights for im/migrants, reproductive justice and solving the climate crisis. Additionally, there were calls for equal pay, LGBTQ2+ rights and an end to sexual abuse. Health care workers’ placards called for Medicare for All. Signs demanded: “Trans rights now!”

A diverse grouping of march organizers emphasized building a “community of activists” and grassroots mobilizing, rather than showcasing celebrity speakers. Even though getting out the vote for Democratic presidential candidates was raised, the goal of building an inclusive and international movement was stressed.

The energetic participants said they were empowered by the annual demonstrations since Trump was inaugurated.

To start off the march, Hope Butler, member of Maryland’s Piscataway Conoy Tribe, welcomed demonstrators to her tribe’s territory. Then a group of Indigenous women sang and chanted to honor Missing and Murdered Indigenous Women and Girls before they led the march to encircle the White House. 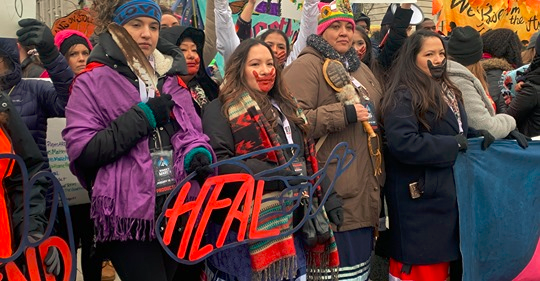 Las Tesis, a Chilean women’s performance collective, led a powerful mantra denouncing gender violence, “Un Violador en tu Camino” (“A Rapist in Your Path”), near the misogynist president’s mansion. Thousands of marchers sang with them there and then again outside the Trump International Hotel. This song, performed by women during recent protests in Chile against the repressive, patriarchal regime, has become a global women’s anthem.

Here are reports by Workers World activists about a few local protests.

The Women’s March 2020 was held in front of Buffalo’s City Hall in freezing wind and snow. The event was organized by the Western New York Peace Center and co-sponsored by dozens of groups. The Buffalo Anti-War Coalition contingent had a speaker, held three banners and distributed flyers for the Jan. 25 “No War on Iran!/U.S. Out of the Middle East!” protest, with the “Sanctions Kill Women” flyer on the reverse side. There was also a contingent from the Ain’t I A Woman?! Campaign, which is fighting to abolish the 24-hour workday for home care workers. The Queen City Feminist group led the chanting of the Chilean women’s song protesting gender violence. 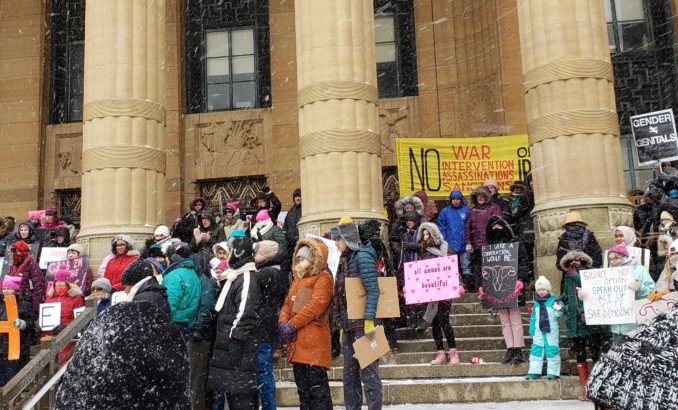 Some 1,000 people gathered at a rally in Foley Square. The Campaign Against Sanctions and Economic War had a visible contingent with signs raising the horrific impact of U.S.-imposed sanctions on women in 39 countries in one-third of the world. They distributed hundreds of leaflets explaining how sanctions are weapons of economic war, resulting in chronic shortages of basic necessities, famine, disease and poverty. 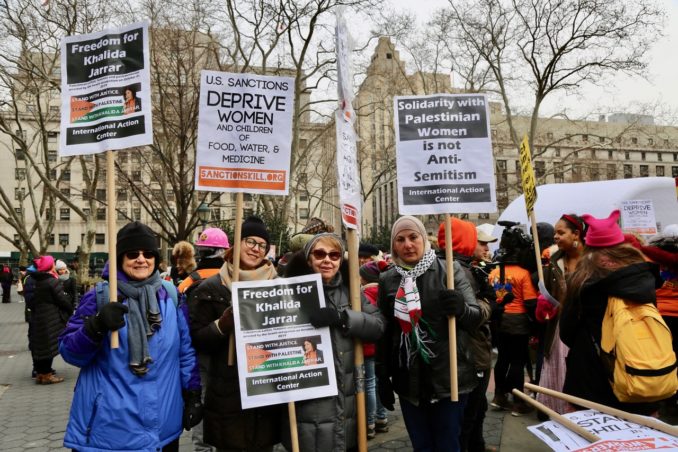 Many unions were there in large numbers, including District Council 9 of the Painters union (IUPAT); District Council 37 of the American Federation of State, County and Municipal Employees; and Service Employees Local 32BJ. Despite the 20-plus-degree weather, there was a warm feeling of community and solidarity as participants called for the end of violence against women and for reproductive justice, the rights of workers, im/migrants, people of color, LGBTQ2+ people and individuals with disabilities, and for halting the climate crisis. 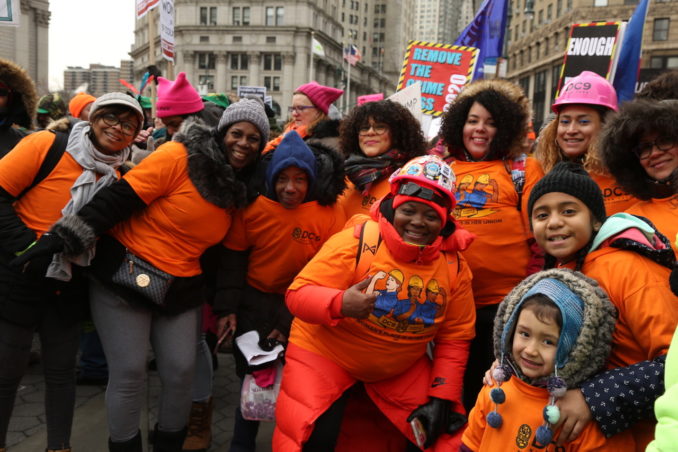 Members of Las Tesis drummed, danced and led the group in chanting their powerful anthem against gender violence.

The Women’s March brought thousands to the Benjamin Franklin Parkway despite cold, wet weather. Under the theme “The Year of the Woman,” participants of all ages gathered at Logan Circle for a short march up the parkway to the Philadelphia Museum of Art.