United States policy toward both Iran and Iraq is based not on “bad advice” or howling blunders by President Donald Trump, as Democratic Party pundits claim. It is not just a “mismanaged” foreign policy. 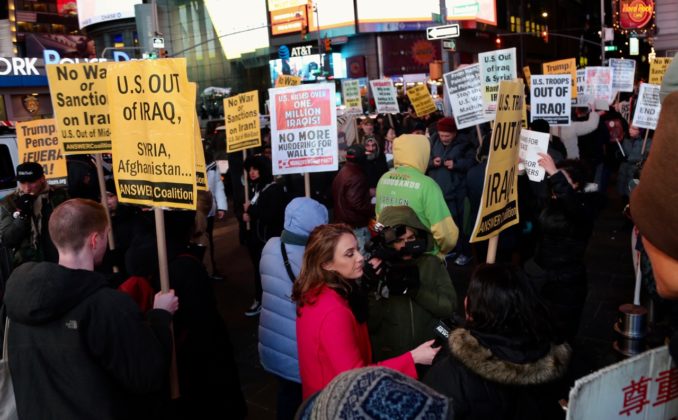 Washington’s miscalculations of the past two weeks have been driven by extreme frustration at all levels of U.S. ruling circles, military strategists and think tanks. They reflect developments U.S. imperialists have been unable to push back. In fact, their desperate efforts have had the opposite effect.

The U.S. imperialists are losing their overarching dominant influence in the region. Their ability to control events on several fronts — political, economic and even military — is slipping.

Their weakened position is likely to drive them toward deeper rogue actions, even more reckless threats and new war crimes.

But these criminal actions can also foster deeper anti-imperialist unity in the region. Recent massive demonstrations in Iran and Iraq reflect this. So does the willingness of Iraqi security forces guarding Baghdad’s Green Zone, home to the U.S. Embassy, to literally open the door on New Year’s Eve to thousands of angry people protesting U.S. missile attacks.

The implications of this successful strike by Iranian missiles launched from hundreds of miles away will resonate throughout the region. The U.S. has always boasted that its equipment is much more advanced and technically sophisticated.

U.S. collaborators among the corrupt Gulf State monarchies may be having second thoughts about the hundreds of billions of dollars they have spent on U.S. weapons. They will be reevaluating the ability of U.S. promises to protect them, even from the wrath of their own populations. They might also be interested in re-evaluating their hostile relations with Iran.

This was the second time U.S. weapons didn’t achieve what Washington wanted.

In September, using low-flying drones, Houthi rebels in Yemen temporarily took out half of Saudi Arabia’s oil and gas installations. The U.S. blamed Iran. Billions of dollars of Patriot missile systems purchased from the Pentagon offered no protection.

According to many U.S. and Israeli claims, the same missiles and drones are shared with the highly organized Hezbollah forces in Lebanon.

General Soleimani’s Jan. 2 state visit to Iraq, to discuss Saudi peace overtures after 40 years of aggressive hostility, may have been due in part to the successful Houthi drone attack from Yemen.

On Jan. 10, U.S. Secretary of State Mike Pompeo refused to even discuss with the Iraqi prime minister a vote in the Iraqi Parliament telling U.S. troops to leave Iraq. But U.S. and NATO collaborators got the message.

As Trump called for NATO to step up its involvement in Iraq, NATO allies instead announced their departures. Canada stated it was withdrawing some 500 troops. Germany was next, announcing a partial withdrawal of its troops. Then Sweden, Denmark, Hungary, Romania and Latvia all suspended their training missions with Iraqi forces. Many other countries — including Britain, France, Italy, Spain, Australia, Denmark, Norway, Portugal and Bulgaria — have already withdrawn their troops from Iraq.

Despite the vote in the Iraqi Parliament for the U.S. to leave, the Pentagon has yet to announce its decision.

Threat of sanctions on Iraq backfires

Trump responded to the Iraqi vote with new threats.

Beginning in 1990, and continuing in part even today, the U.S. has imposed sanctions on Iraq. The U.N. estimated that, in the first four years of these sanctions, half a million Iraqi children under the age of five died of malnutrition and preventable diseases.

Trump has now threatened that if U.S. troops are told to leave, he will reimpose the sanctions on Iraq “like they have never seen before” — so harsh they would “make Iranian sanctions look somewhat tame” by comparison.

Rather than help Iraq in its desperately needed reconstruction of essential civilian water and electric infrastructure destroyed in the U.S. war, Trump now threatens that Iraq must pay the U.S. back for the “billions of dollars” it spent building air bases for its military operations.

It was Trump’s decision in 2018 to withdraw from an agreement with Iran, signed by five permanent members of the U.N. Security Council and Germany in 2015, and instead impose harsh new unilateral sanctions. This led to the regional crisis.

The new U.S. sanctions created enormous hardship in Iran. But they did not, as had been predicted, lead to Iran’s collapse. However, they did have far-reaching, unintended consequences throughout the region, forcing all political forces to actively turn, for their survival, away from U.S. domination and toward regional cooperation.

A growing number of joint Iraqi-Iranian projects now include setting up industrial parks along the south, central and northern borders and increasing commercial links to $20 billion a year in trade.

The most interesting joint project, signed in May 2019, involves the dredging of a common waterway, known in Iraq as the Shatt al-Arab and in Iran as the River Arvand, to facilitate shipping, commerce and tourism. Iran and Iraq had waged war throughout the 1980s over control of this vital artery, which forms a natural border between the two countries. Due to hostilities, the waterway has not been cleared since the mid 1970s.

Iran and Iraq are also planning on developing the Naft Shahr and Khorramshahr natural gas fields. Plans to link the Iraqi and Iranian railway networks together are also moving forward. This will enable U.S.-sanctioned Iran to transport goods, through Iraq, to U.S.-sanctioned Syria, which has seaports on the Mediterranean coast.

These cooperation developments have been covered by both Arab and Iranian news services.

After high-level meetings in May, Iraq is increasingly using Iran’s refined petroleum products for needed gas and electricity, helping the disrupted economies in both countries.

Trump’s bellicose threats of harsh sanctions on Iraq will only strengthen these regional decisions and trade agreements.

Prime Minister Abdul Mahdi headed a large delegation to China this past October to discuss mega projects in infrastructure, education and health. The meetings were described as “a quantum leap” in bilateral relations.

Trump’s reaction? He demanded that Mahdi cancel the contracts.

China’s Hilong Oil Service & Engineering Co. and the Iraqi Drilling Co. agreed to a joint venture to exploit numerous oilfields throughout the country, including the Majnoon field — one of the world’s largest.

China’s economic relations with Iran are more advanced than those with Iraq.

China and Iran in 2016 signed a $600 billion, 25-year trade agreement based on the international agreement to end sanctions on Iran.

The U.S. illegally abrogated this agreement and has demanded that every other country also cancel its trade. But China has not complied with U.S. demands. Under its Belt and Road Initiative, sometimes called the New Silk Road, trade with Iran has expanded.

Extensive new rail lines through Turkmenistan and Kazakhstan connect China and Iran, cutting delivery time to half that of ocean trade. Future rail lines from Urumqi in Xinjiang province to Tehran will further shorten trade time and expand economic ties.

These two formerly colonized and oppressed countries, Iran and China, are increasingly targeted by U.S. imperialism. In response, they are expanding exchanges in defensive military technology and advanced technical support.

On the same day that U.S. drones assassinated Iranian Gen. Soleimani in Iraq, the first joint naval exercises of Iran, China and Russia were underway in the Gulf of Oman, off the Iranian coast.

Wall Street’s ruthless and expanding efforts to starve every country into compliance need to be met with such class-conscious, anti-imperialist solidarity.

The struggle is far from over and the growing desperation of capitalist exploiters and Pentagon war planners means many crises lie ahead. However, there are a new, determined mass mood and new means to confront a decaying system built on piracy, looting and occupation.

The leader of Lebanon’s highly organized Hezbollah militias said the U.S. killing of Gen. Soleimani will impel the entire region into a “completely new phase.”

Speaking before thousands of supporters at a rally in southern Beirut, Hezbollah leader Hassan Nasrallah called the U.S. killing of Soleimani a “clear, blatant crime that will transform the region.”