Jan. 11 — Over 700 people rallied in Liberty State Park today to oppose the transfer of 22 acres of parkland to the adjacent private Liberty National Golf Course. Liberty National, owned by billionaire tycoon Paul Fireman, has an initiation fee of $500,000. 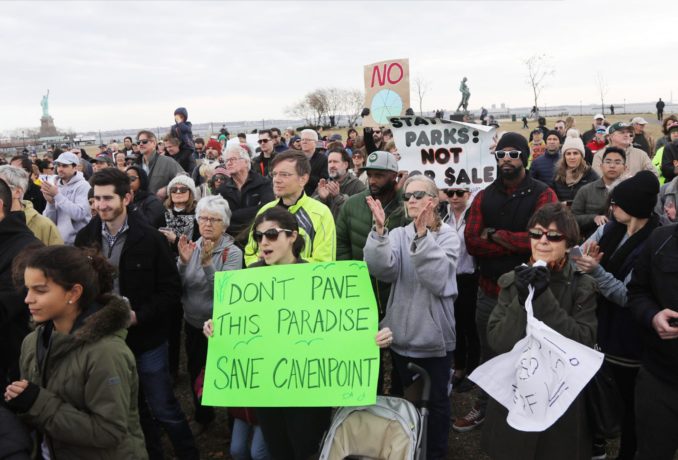 The 22 acres, known as Caven Point, is a migratory bird habitat teeming with bird life year round. Those who came to the rally, reflecting the broad diversity of Jersey City and the surrounding area, included high school students, environmental activists, bird watchers, trade unionists, military veterans, scientists and local politicians. Support to stop this theft of precious land is wide and deep, and the 1%  were a target of every speaker at the rally, which was called by over 50 organizations. (NY Times, Jan. 9)

Liberty National has been maneuvering behind the scenes in Trenton, the state capital, with devious tactics ranging from getting friendly politicians to undertake parliamentary maneuvers to setting up a “coalition” of construction unions desperate for jobs and trying to convince local communities of color that saving the Caven Point wildlife refuge is not in their interests!

The park is New Jersey’s most visited state park with 5 million visitors a year — it’s a people’s park. And the people have fought off numerous attempts to privatize the restored waterfront park throughout its 43-year history — a continuous onslaught of development proposals, including the private golf course, a water park, a Formula One racetrack, a sports complex and a second private yacht marina — and are fighting now to protect the bird sanctuary at Caven Point. (tinyurl.com/wzac83r)

The LSP Protection Act, currently pending in the New Jersey State Assembly to protect the wildlife refuge, would prohibit any concession, conveyance or lease within the 235-acre natural restoration area in the interior of the park and at Caven Point Peninsula. The bill was submitted by two Assembly members from Jersey City: Raj Mukherji of South Asian descent and Angela McKnight, an African American.