When Vol. 61 No. 48 of Workers World newspaper came across the desk of the prison staff at State Correctional Institution Frackville in December, censors seized on an article that criticized the Pennsylvania facility’s administration for a variety of offenses.

In direct violation of the inmates’ First Amendment rights, staff rejected the paper and refused to distribute it among the many subscribers at Frackville. However, thanks to a coordinated effort from both inside and outside the prison, the state Department of Corrections finally relented and the paper got through. 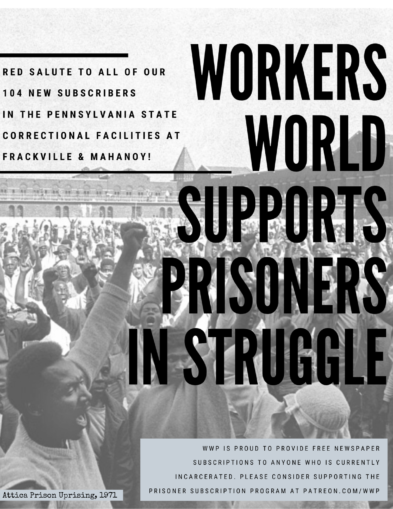 While it is clear that the paper was marked for censorship because of the criticism of prison policies, the official reason for denial was that the article, titled “Death, destitution, and activism in SCI Frackville” (tinyurl.com/vyresbu), mentioned a particular staff member by name.

The DOC employee, Sgt. Purcell, has been accused of refusing to process legal mailings for inmate Bryant Arroyo, thereby illegally blocking legal communication with his lawyers. This incident was noted in an official grievance filed by Arroyo, which is a matter of public record.

Not least among the other concerns raised by inmates was the callous indifference to the death of longtime inmate Cleveland Butler. At Butler’s memorial service for prisoners at the facility, Keith “Hungry Jack” Brown sang a beautiful rendition of a Boyz II Men song. Kurt Danysh, one of Butler’s fellow inmates who addressed the assembled mourners, likened the crowd who came to pay tribute to their friend as resembling a “box of crayons,” noting that the diversity of the group was a testament to Butler himself.

Prisoners’ response to oppression and censorship by their captors is historic. After the censorship of Workers World newspaper, over 100 inmates at SCI Frackville and nearby SCI Mahanoy requested subscriptions to the paper.

Workers World is proud to help elevate the voices of all workers and oppressed people, particularly our brothers, sisters and siblings who are prisoners in these 21st century concentration camps. We welcome these new subscribers and salute their refusal to be silenced.

Abolitionists who demand a permanent end to mass incarceration in the U.S. must have no illusions about the severe retaliation that inmates face for exercising their right to political speech. At SCI Albion in Pittsburgh, a Workers World contributor named Jerome Coffey has been thrown into solitary confinement for his outspoken condemnation of this white supremacist, capitalist system.