While devastating fires, ignited by a record-breaking heat wave in Australia, have grown in strength and number since September 2019, the sources of these fires go back to when the British began colonizing the continent some 200 years earlier. 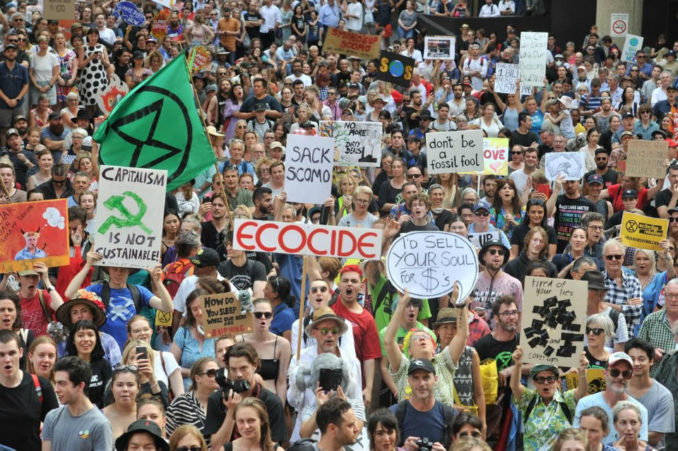 It is estimated that over 1 billion animals have perished in the flames and 27 people have been killed. This immense and irreversible loss of life is the result of the theft of Aboriginal lands, destruction of sacred sites, introduction of foreign species and pests, poisoning the land and water, and growth of water-intense produce. The disrespect for Indigenous custodians of the land and disregard for warning signs, including drought, fires and floods, have also contributed to this catastrophe — along with the climate catastrophe.

Vanessa Cavanaugh, an Aboriginal woman of the Bundjalung Wonnarua (original custodians of lands on the eastern coast of Australia), co-wrote an article: “Strength from perpetual grief: how Aboriginal people experience the bushfire crisis.” She states, “Colonial legacies of eradication, dispossession, assimilation and racism continue to impact the lived realities of Aboriginal peoples. Added to this is the widespread exclusion of our peoples from accessing and managing traditional homelands. These factors compound the trauma of these unprecedented fires.” (theconversation.com, Jan. 9)

Cavanaugh explains that with intergenerational trauma comes intergenerational wisdom. The few areas that are still managed by Indigenous people practicing cultural burning have resisted annihilation from these massive bushfires, whereas other areas have not. These protected areas will be quicker to recover from the devastation and will provide an example of how to move forward to prevent something this disastrous from occurring again.

She wrote on her Jan. 6 Twitter feed regarding the land: “I hope it’ll recover. I hope that Indigenous knowledge & expertise takes precedence in the forward management of natural environments. This requires Indigenous people & systems leading the process, not being tacked on, or our knowledges excerpted & cropped into failing models.”

For thousands of years, Aboriginal custodians of the land have practiced cultural burning. Also known as fire-stick burning, it is the intentional practice of setting small, controlled flames to prevent fire risks and produce new life. These cultural practices were passed down in order to make land more fire-resilient, as well as to rejuvenate local flora, protect native animal habitats and engage in reciprocal kinship with the land.

Oliver Costello, from Firesticks Alliance Indigenous Corporation, has been trying to implement these practices on a large scale. He states, “Since colonisation, many Indigenous people have been removed from their land, and their cultural fire management practices have been constrained by authorities, informed by Western views of fire and land management.” (theconversation.com, Jan. 9)

Australia’s Prime Minister Scott Morrison has been deemed “the Australian Bolsonaro.” Brazil’s President Jair Bolsonaro is a climate change denier who has actively allowed the Amazon rainforest to burn for the benefit of businesses and to the detriment of Indigenous people as well as the rest of the planet. The scale is comparable. According to NASA’s Fire Information for Resource Management System, the 2019 fires in the Amazon torched 11 million acres of land, while fires in Australia have burned 14.5 million acres.

Since September Australia’s bushfires have released 350 million tons of carbon dioxide, equal to two-thirds of the country’s annual emissions from human-made sources based on data from NASA satellites, according to Pep Canadell, director of the Global Carbon Project. (Reuters, Jan. 7)

Despite all the available data, Prime Minister Morrison and Emissions Reduction Minister Angus Taylor have ignored all sound science and warnings that the crisis will only grow worse if the current lack of response is maintained.

Morrison and Taylor say that Australia does not need to cut carbon dioxide emissions more aggressively to limit global warming, even after a three-year drought and unprecedented bushfires. Instead, they say Australia, which contributes 1.3 percent of the world’s carbon dioxide emissions, but is the second-largest emitter per capita behind the United States, should be rewarded for beating its emissions reduction targets for 2020.

As the world leader in coal exports at $70 billion annually, Australia is going to have to greatly restructure the way it does business and life if it is going to survive this catastrophic threat.

Tens of thousands of protesters took to the streets in every major city throughout Australia on Jan. 10. These nationwide rallies were organized by Uni Students for Climate Justice. With 30,000 rallying in Sydney alone, the masses called for the resignation of Morrison because of his inaction in response to this massive climate crisis.

In light of recent international developments, troops from neighboring New Zealand are calling for a boycott on war with Iran. Teanau Tuiono from Manawatu Peace Action alleges the U.S. has wanted war with Iran for decades. Rather than fall in line with the imperialist power, he asserts that New Zealand troops, which include a high percentage of Indigenous Māori, are better deployed in their own region working on issues such as climate crisis.

In an era when catastrophic events are increasingly and violently displacing the living, the movement for climate justice is still evolving. This movement must support Indigenous custodial practices and sovereignty and act in solidarity with migrants, who are increasingly displaced by the climate crisis and the imperialist system that exacerbates it.