Jan. 13 — For more than 100 years, Parchman Prison in Sunflower County, in Mississippi’s Delta region, has been the location of brutal racism, wretched conditions and unrelenting cruelty. 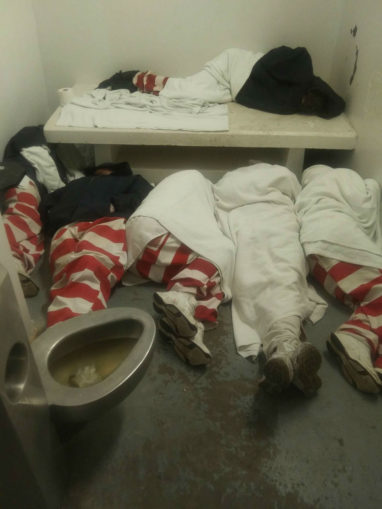 Six Parchman prisoners in one cell, sleeping on cold floor with no blankets.

The deaths of five inmates in Mississippi prisons during the first week of January 2020 — three of those at Parchman – has brought much needed attention to the inhumane conditions endured by the state’s prison population. The official response to the deaths was a statewide lockdown that stopped visitation and phone calls — and locked all inmates in their cells for days without required showers, medical care, legal visits or exercise.

At a Jan. 9 rally at the Georgia State Capitol building in support of the Mississippi prisoners, two Black women with relatives in Parchman’s Unit 29 brought their stories of days of fearful waiting, not knowing if a brother or fiancé were dead or alive, injured or safe.

Mississippi Corrections officials released next to no information despite numerous phone calls. The spate of violent death only became public knowledge because of cell phone videos and text messages from those held in Unit 29, the largest housing section at Parchman.

Both women provided virtually the same descriptions of conditions their loved ones were enduring — rats and roaches everywhere, mold on the walls, no running water, broken toilets, no lights, exposed wiring, inedible food, callous and intimidating guards, collapsing ceilings, rain pouring in from holes in the roof with stifling heat in the summer, damp cold in the winter.

Porshia Evans said her brother was stabbed multiple times in Wilkinson County Jail prior to being sent to Parchman in November — evidence that violent conditions are throughout the system. Her brother, her only sibling, sent word that he has survived at Parchman, but guards have confiscated his canteen items, hygiene products, legal papers, letter writing materials and books. He was removed from Unit 29 to Unit 32, a building taken out of use 10 years ago because of its decrepit condition. There he and others were put, six or more, into cells without running water and had to sleep on the floor with no mats or blankets.

The second woman, worried about repercussions for her fiancé, asked to be known only by her initials, CCC, to tell his story. A fast food worker and mother of six, she actually got confirmation that he was alive and uninjured while at the Jan. 9 rally. He related to her that by chance he was standing near one of the men who was killed and that he and others had been in the “hole” (solitary) for seven days. With more recent news, she knows he was later removed to Unit 32 and hasn’t had a shower since New Year’s Eve. He says many have been injured in encounters with other inmates and prison forces.

Evans and CCC both said that bad storms in the area Jan. 10-11 caused the electrical power to go out at Parchman. There were no lights and no running water. Though power was restored in the area, prison officials had not manually turned the power back on as of Jan. 12.

Meanwhile, prison officials continue to provide little information to the families of the men who were killed. In a Jan. 12 Atlanta Journal Constitution article, Rotonia Gates, the mother of Walter “Keon” Gates who was killed Dec. 31; Jeffrie Hollman, whose son Roosevelt Hollman was beaten and stabbed to death Jan. 2; and other relatives provided details about their loved ones’ fate.

Denorris Howell’s blood-covered body was found Jan. 3 in Unit 29. He had spoken to his mother just hours before his murder, pleading for help, fearful he was going to die. Relatives of the five men who were killed question the role of the guards, are critical of Department of Corrections officials, and wonder about the inaction of elected state officials related to the deaths of their loved ones.

Mississippi has the third highest incarceration rate in the U.S. — the country that leads the world in incarceration. Parchman Prison has been a death trap since its earliest days. In addition, Parchman is part of the Southern prison-industrial complex, with its roots in slavery, which made money off convict leasing to big plantations and companies through the 1920s and profited from notorious chain gangs during Jim Crow segregation. Now, prisons sign lucrative contracts with private companies for commissary or phone services, while mass incarceration laws continue to target people of color communities.