India is the world’s second-most populated country, with about 1.374 billion people. Over 928 million are “working age” (15 to 64 years old; statistics from worldometers.info) On Jan. 8, one in four people in this age group — 250 million — stayed off the job in the biggest strike to date in world history, 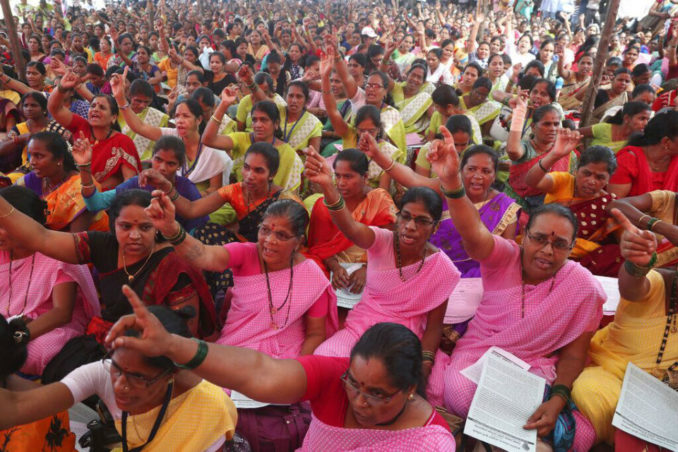 The 24-hour strike shut down banking, transport, retail, public services, construction and industry in many parts of the country. Workers blocked highways and railroad tracks, with their bodies, barricades and burning tires. Police cars and government buildings were attacked in some places.

The strike was three months in the making. “We have been campaigning from September,” said Amarjeet Kaur, General Secretary of the All Indian Trade Union Congress, two days before the strike: “Anger of the nation will culminate on January 8.” AITUC is one of the 10 Indian labor federations that jointly called the “bandh” (shutdown). Kaur predicted a “complete bandh” in 10 to 15 cities and massive participation across India. (NewsClick, Jan. 6)

The strike was initially called around a 12-point program protesting Prime Minister Narendra Modi’s anti-worker legislation and massive privatization plans, affecting such national assets as airlines, railways and petroleum refineries. Other points addressed high unemployment and inflation in the world’s third-largest economy and called for raising the minimum wage and pensions. Two-thirds of the population live on less than $2 a day; nearly half of them are “extremely poor,” subsisting on $1.25 a day or less.

As Subhashini Ali, a Delhi Communist party leader explained, “When this strike was originally called, it was to register anger against anti-labour laws and the selling-off of the country’s assets. But now it’s broader because there are no jobs. The future of young people is being destroyed by Modi.” (The Guardian, Jan. 8)

Red hammer-and-sickle flags were prominent in many strike photos.

Kaur reported that in some economic sectors strike participation ran at 90-100 percent. “The working class is on the streets today,” she said. The strike engaged the whole population, including large numbers of informal sector workers and farmers. Economic hardship has led to publicized suicides of several farmers.

Student organizations in India and abroad were solidly behind the strike. A National Education Strike of students boycotting classes and calling for affordable education coincided with the Jan. 8 bandh. A solidarity statement with students was signed by 21 groups, including United Students Against Sweatshops and a dozen U.S. graduate student unions. Indian students in the U.S. are planning to demonstrate in five cities Jan. 26. 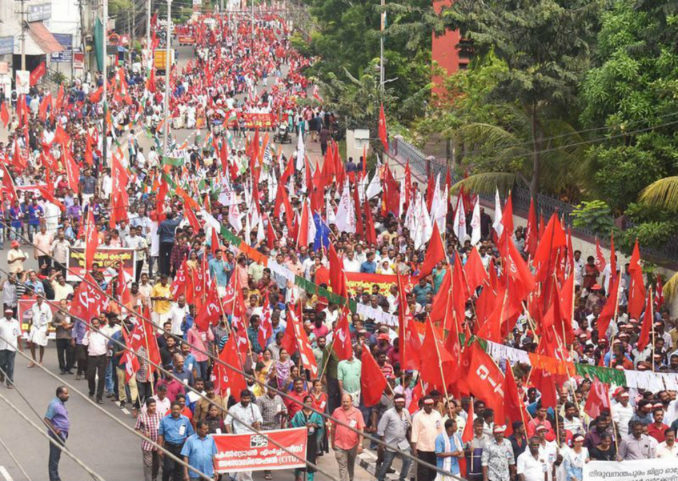 Union solidarity statements were up on line even before Jan. 8. “The World Federation of Trade Unions, which represents more than 97 million workers from 130 countries in the 5 continents, stands firmly and militantly on the side of the Indian working class and expresses its internationalist solidarity with [the] All India general strike on January 8th, 2020,” the WFTU posted Jan. 7. “We condemn the government’s nationalist strategy of dividing and fragmenting the working class on an ethnic and religious basis which is not only reactionary, unacceptable and harps back to colonialist tactics but is also unconstitutional.” (wftucentral.org)

Other statements came from worldwide federations of construction and education workers and the National Union of Rail, Maritime and Transport Workers in Britain.

Capitalists line up with Modi

The poverty of the Indian masses is directly related to the huge profits being made by U.S. companies that invest in India. They include General Motors, Ford, General Electric, Microsoft, Amazon, Pfizer, Coca-Cola and many others which pay slave wages. U.S. Foreign Direct Investment last year was over $3 billion, and this country is India’s fourth-largest trading partner. (business.mapsofindia.com)

One thing should be clear to workers and oppressed people here in the belly of the beast: In India, like here, there is a battle between two antagonistic class forces. Our fight is alongside the quarter-billion workers, peasants and students who shut their country down on Jan. 8.