Over 100 supporters of the Metanoia Project, which provides trauma-sensitive respite to homeless people in Cleveland, packed City Council chambers on Jan. 6. They were there to support efforts of Denison United Church of Christ to continue the work of Metanoia, which lost bed space at its original location in November. Pastor Nozomi Ikuta describes the partnership as “protected and essential expression of our faith.” 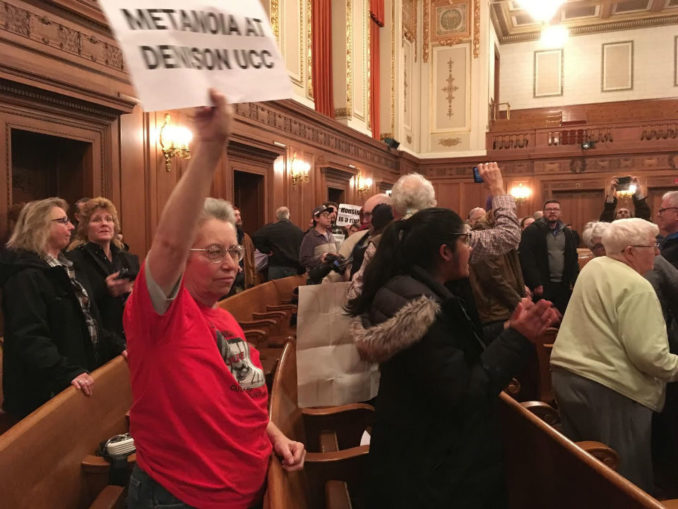 City Councilwoman Dona Brady, who represents Ward 11 where Denison UCC is located, is trying to use claims of housing and fire code violations to keep the church from housing the homeless. She has even tried to revoke its designation as a church.

“We’re here to say: Keep Metanoia open, support Denison UCC, build a cold-weather plan, and take a stand against NIMBYism (Not In My Back Yard) and racism in our community,” said Northeast Ohio Coalition for the Homeless Executive Director Chris Knestrick.

Activists inside the meeting interrupted proceedings to invoke the memory of Lorraine Van De Venter and Juan Proctor, homeless people who froze to death during one brutal Cleveland winter. Police attempted to confiscate all the paper signs that read “Ward 11 supports Denison UCC” and “Keep Metanoia at Denison UCC.” After the meeting ended, the crowd burst into loud chanting of “Keep the shelter open,” holding up signs that had escaped detection by the police.

Hours after the council meeting protest, the church was hit with a surprise visit by two inspectors from the Cleveland Fire Department, escorted by six police. Acting at the behest of pro-gentrification Councilwoman Brady, the inspectors affixed a “Cease Use” notice on the church door on Christmas Eve. Denison UCC appealed the order.

The church passed the inspection, which was a victory. So far, because of militant community support and Pastor Ikuta’s determination, this homeless shelter is staying open.