“The system” is what Algerians call the shadowy, highly corrupt group of Army officers, high-ranking politicians and businesspeople running their country. In February the news hit that Abdelaziz Bouteflika, the then-current president who had had a disabling stroke in 2013, was going to run for a fifth term as president. 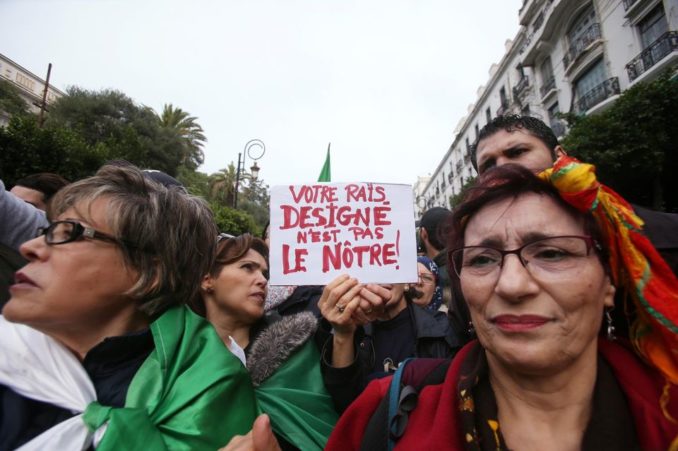 Tens of thousands of Algerians took to the streets all over this vast country, the largest in Africa, to protest him and his regime. After a month or so of weekly protests following Friday prayers involving hundreds of thousands of people — men, women, youth, families and elders who remembered the war for independence from France — Bouteflika resigned. The interim government, basically set up by the army, called for an election in July. Nobody registered as a candidate, so it was called off in June.

Weekly protests continued, even in the deadly heat of an Algerian summer, demanding “the system” be replaced by a fairer arrangement that didn’t just reward people at the top.

The interim government of Abdelkader Bensalah, who was speaker of the upper house, set Dec. 12 as the date for the next presidential election and undertook extensive political and organizational steps to prepare for it.

All the candidates that were vetted by the electoral commission were close collaborators — ministers and others — with the Bouteflika regime. The Hirak, the loose coalition that coordinated the 42 massive weekly national demonstrations leading up to Dec. 12, called for a boycott of the election, since all the candidates were part of “the system.”

The Dec. 12 demonstrations in Algiers were huge, and people stayed in the streets, even after the cops aggressively attacked protesters and singled out a few to beat and then arrest in front of French TV cameras. (There is a very large Algerian community in France.) There were photos of nearly empty polling places and lines of people waiting to stuff their ballots into a trash can.

In the Kabylie, a historically rebellious area east of Algiers, where Amazigh (Berber) is the main language, protesters broke into polling stations and found that ballot boxes had already been stuffed. (Al Jazeera, Dec. 14)

Algerian election officials, claiming turnout was close to 40 percent, declared Abdelmadjid Tebboune the winner in the first round with 58 percent of the votes cast.

The Rally for Culture and Democracy, a major secular, center-left political party, estimated the turnout was 8 percent, which is consistent with the reports of ballot stuffing and sparse crowds at many polling stations. (tinyurl.com/s396s48)

Police reaction, according to the Algerian League for the Defense of Human Rights, varied from region to region. In Algiers, it was aggressive and nasty but relatively restrained. French television and international press cameras were mainly located in Algeria’s capital.

In Constantine, the largest city in eastern Algeria, the protest reportedly went off without major hitches. In the Kabylie, which has about 9 million people, there wasn’t much police presence, but a vicious attack, with cops firing rubber bullets, took place in Haïzer. (www.tsa-algerie.com)

In Oran, the police made over 400 arrests in a “brutal fashion,” beating people with their clubs and liberally using tear gas, according to local newspaper Le Matin d’Algérie (Dec. 13).

The Hirak was able to hold its weekly protests in a number of cities Dec. 13. It is not clear how this presidential election is going to affect the ongoing struggle in Algeria.