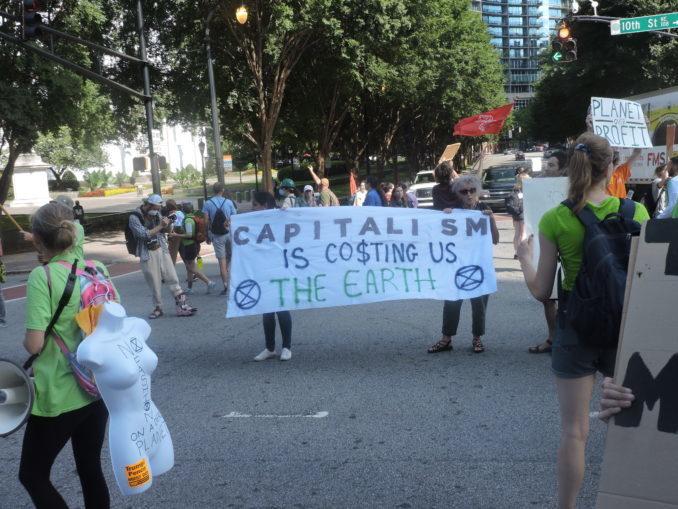 Every day, the price of stocks on Wall Street go up and down depending on the growth of the economy. Growth of mineral extraction, growth of agriculture, growth of manufacturing and especially growth of sales and growth of capital. When growth slows down, when markets dry up, a crisis is sure to follow.

The health of the capitalist economy depends on growth. The cry everywhere is “More growth!” Wall Street breaks out the champagne when growth goes up. It goes into a panic when growth stagnates.

The one thing that doesn’t seem to bother the markets is whether this growth leads to a better standard of living for working people — those who produce everything that is consumed.

And the fact is that for many years, while economic growth in the U.S. has continued to expand at around 2 percent per year (not counting years of recession), the standard of living of the working class has actually been declining.

The wages of U.S. workers fell from 64 percent of the gross domestic product in 1980 to 58 percent in 2016. And according to Pew Research, the actual purchasing power of wage earners in this country has barely budged since 1964 — more than half a century ago! In addition, within the category of “wage earners,” the only real gains have gone to the top 10 percent.

In other words, the workers who produce everything have been receiving less and less in return. At the same time, the parasitic class of owners has been upgrading from millionaires to billionaires.

It is a lie to equate economic growth in a capitalist country with better conditions for the mass of the people. The statistics show that the economy can expand every year, even as the working class falls deeper into misery.

Despite all the glowing propaganda, capitalist economic growth doesn’t translate into a better standard of living for the workers. That takes conscious and organized struggle by the working class.

Growth versus the environment

And there is another huge downside to unplanned, profit-driven economic growth under capitalism: It has put the environment under greater and greater stress. Unless positive action is taken, the problems contributing to global warming and degradation of the land and water are bound to become more drastic the more  capitalist economies grow.

The more trees that are cut down; the more land that is cleared for monoculture; the more coal, oil and gas that are extracted from below ground and burned to produce energy; the more plastic and other nonbiodegradable goods that are manufactured; the more military bases, tanks, planes and ships that are commissioned to lay waste to whole areas of the world in order to exploit them more effectively — the more the planet warms, and our ecosystems become overwhelmed.

But all these activities create huge profits for the tiny class of bosses and bankers, whose vast fortunes buy them governments and laws to further their exploitation of the working class and of nature.

One of the big factors contributing to capitalist economic growth is advertising. Advertising has ballooned into such a huge industry because it creates an artificial need where none existed before. It is aimed at making people feel that their happiness, sense of well-being and even self-worth depend on buying products they otherwise wouldn’t have taken an interest in or need for a comfortable life.

Advertising is essential to capitalist growth. It has become a relentless and ever-present feature of modern life under capitalism. Besides promoting sales and profits, it very consciously breaks down solidarity and self-esteem, stimulating competitiveness and acquisition based on who can afford the latest gadget, the fastest car, the coolest styles.

At the same time, in much of the world, needed economic growth that normally would accompany technological development has been stunted and deformed by colonialism and imperialism. In the so-called developing countries, there is a crying need for infrastructure projects to provide clean water, sewage treatment, renewable energy, comfortable housing, efficient transportation, affordable medical facilities and a nourishing diet.

But instead, the imperialists suck out the raw materials and wealth of the countries they have conquered and made into their neocolonies. And in place of having access to clean water and fresh food grown locally, the people are more and more reduced to dependency on imported, manufactured food and beverages.

Most often, the economic growth that is made available to oppressed countries is confined to those areas that facilitate the extraction and transportation of raw materials. Modern pipelines and freight trains coexist alongside rutted roads and dirt-floor shacks. Electricity powers huge mines and factories, but the workers go home to a single lightbulb and a hand-pumped well, if even that.

Socialist planning the only answer

For those who understand that economic growth under capitalism is ruining the world, there is but one answer. Not despair, or running away from the great concentrations of workers in the cities in order to hopefully find a simpler life.

There is nowhere to run. Capitalism’s despoiling of the environment is reaching into what have been the most pristine and unspoiled areas of the Earth: the vast polar wildernesses; the deepest oceans; the rain forests from the Amazon to Indonesia; the Australian outback; the mountain peaks from Everest to Kilimanjaro.

Socialism is the only alternative to capitalism. Surveys show that socialism has become extremely popular among millennials. Socialism means a planned economy, run not for private profit but for the common good. Getting there is a huge job and requires wresting power away from the small class of exploiters who today run the show.

Only the multinational working class can do this. It is the working class, when conscious of its strength and united against the bosses, that has the power to transform society and end the exploitation of both people and nature. The place to be, if you want to fight this decaying system, is in the struggle to organize for a workers’ world.