Dec. 16 — The general strike in France has lasted 12 days as of today. Transportation is barely hanging on, with just 10 to 30 percent of scheduled trains running. Cars and buses spend hours in traffic jams. Bicycle lanes are jam-packed. Cafés, restaurants, hotels and stores report losing major amounts of year-end holiday business. 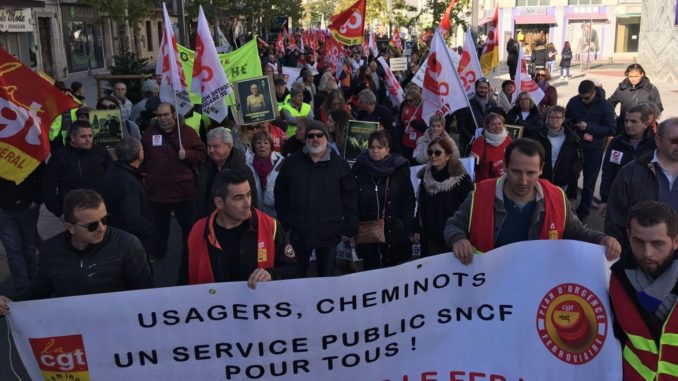 French workers march in the streets of Draguignan, Dec. 10, to say no to pension reform. (Photo: A. Dequidt)

Traffic jams in the region that includes Paris were twice as long today as they are at their worst when mass transit is running normally.

The public reaction to the strike is surprising. Despite the tremendous inconvenience, a strong majority supports the unions’ objections to the government’s plan to impose major pension cuts. Many believe the government left the workers no choice, pushing them out on strike.

In addition, the government minister in charge of its retirement project was forced to resign today because of “financial improprieties.”

The four federations inside the General Confederation of Labor (CGT) — transportation, railroad workers, chemical industry, and mines and energy — just issued a public warning to the government. “It has a week to announce the withdrawal of its proposal and to relaunch real negotiations to improve the current retirement system.” The strike will continue while the CGT waits.

The French Democratic Labor Confederation (CFDT), which is the largest labor confederation in the private sector, had firmly supported the way the government proposed restructuring the retirement system. Yet what it can’t support are government plans to make workers stay on the job years longer to get a full pension. So on Dec. 11 the CFDT announced it would fully participate in the next national protest march on Dec. 17 and in the general strike.

On Dec. 11, all the left-wing parties in France, some of which are radical more in name than practice, held an open meeting for the first time in 29 years. Attendees included the Communist Party of France (PCF), which called the meeting; France Unbowed (France insoumise); Workers Struggle (LO); the New Anti-capitalist Party; the Socialist Party; and the Greens. The union confederations CGT and SUD were also present. The meeting was widely covered by the French press.

Fabien Roussel, the leader of the PCF, summed up the meeting: “There was unanimity against the government reform. We are asking for its proposal to be withdrawn. We are all united on this point and call for a mobilization for Dec. 17.” (Le Monde, Dec. 11-12)

President Emmanuel Macron and Prime Minister Édouard Philippe claim that since Macron’s campaign promised “reforms,” and the people voted to elect him, that means the people gave him a mandate to impose these changes on the retirement system.

French workers ask why the government, which had participated in two years of discussions, did not propose a concrete plan regarding the pensions until the massive Dec. 5 national demonstration and another six days of a general strike.