This Dec. 6 article from the Italian web newspaper, Il Manifesto, shows how the Dec. 3-4 London NATO Summit reinforced the belligerent stance of that military alliance. Before 1991, NATO was a U.S.-dominated alliance of European and North American imperialist interests directed at the USSR and the East European socialist camp and aimed at preventing socialist revolutions in Western Europe. Since then, NATO has projected its imperialist military force in Africa and Asia and has recently threatened Russia and even China. Translation by John Catalinotto. 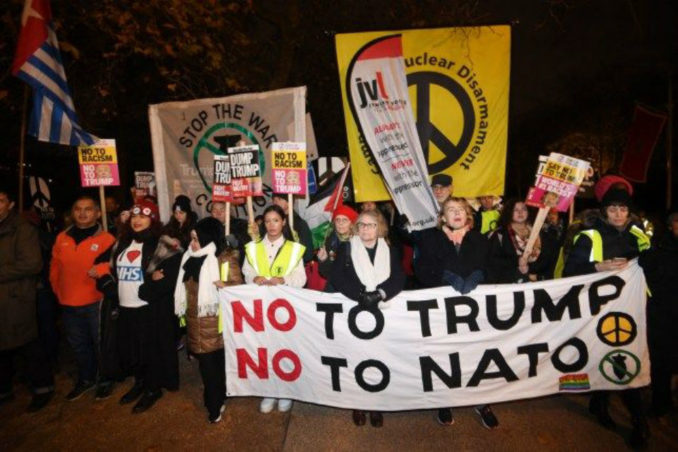 Protesters against NATO Summit in the streets of London, Dec. 3.

French President Macron spoke of the “brain death” of NATO; others called it “moribund.” Is this military alliance, without a head of its own, crumbling as a result of internal fractures? The disputes at the [Dec. 3-4] London Summit seem to confirm this scenario. A look at the substance, at the real interests that the various allies share, provides a different view.

In London U.S. President Donald Trump and French President Emmanuel Macron argued on camera. In Niger in West Africa, with little publicity, U.S. Army Africa (USARAF) carried on its cargo planes thousands of French soldiers and their weapons from various outposts in West and Central Africa for “Operation Barkhane.” Paris deployed 4,500 soldiers for this assault, mostly special forces, and U.S. special forces supported them even in combat actions.

At the same time, the Reaper-armed drones, supplied by the USA to France, operate from Air Base 101 in Niamey [Niger]. From the same base the Reapers of the USARAF  take off. These drones are now relocated to the new base 201 in Agadez in the north of the country, continuing to operate in concert with the French military.

The example is iconic. Transnational corporations based in the United States, France and other European powers compete for markets and raw materials. But they unite when their common interests are at stake.

Consider, for example, those corporations that possess a wealth of raw materials in the Sahel: oil, gold, coltan, diamonds and uranium. Now, however, both popular uprisings and the Chinese economic presence jeopardize these corporate interests in this region, where poverty rates are among the highest. Hence the U.S.-French Operation Barkhane, presented as an anti-terrorist operation, engages the allies in a long-lasting war with drones and special forces.

The strongest link that holds NATO together is the common interests of the military-industrial complex on both sides of the Atlantic. This is reinforced by the London Summit. The Final Declaration provides the main motivation for a further increase in military spending: “Russia’s aggressive actions pose a threat to Euro-Atlantic security.”

The NATO allies committed not only to raising their military spending to at least 2 percent of their gross domestic product, but to allocating at least 20 percent of it to the purchase of armaments. This objective has already been achieved by 16 out of 29 countries, including Italy. For this purpose, the U.S. is investing over $200 billion in 2019.

We can see the results. On the same day as the NATO Summit opened, General Dynamics signed a $22.2 billion contract with the U.S. Navy, extendable to $24 billion, for the supply of nine Virginia class submarines for special operations and attack missions, including Tomahawk missiles with nuclear warheads (40 for submarines).

Accusing Russia (without any evidence) of having deployed intermediate range nuclear missiles and thus burying the Intermediate Nuclear Forces (INF) Treaty, the Summit decided “to further strengthen our ability to defend ourselves with an appropriate mix of both conventional and nuclear anti-missile capabilities, which it will continue to adapt: As long as there are nuclear weapons, NATO will remain a nuclear alliance.”

It is in this framework of military expansion that the Summit’s recognition of space as the fifth operational field arises. In other words, the NATO Summit announced a very expensive military space program. It is an blank check that the NATO powers unanimously gave to the military-industrial complex.

For the first time, with the London Declaration, NATO speaks of the “challenge” coming from China’s growing influence and international politics, underlining “the need to face it together as an Alliance.” The message is clear: NATO is more necessary than ever for a West whose supremacy is now being challenged by China and Russia.

Immediate result: The Japanese government has announced that it has bought for $146 million the uninhabited island of Mageshima, 30 km [18.6 miles] from its shores, to use as a training site for U.S. fighter-bombers deployed against China.