Dec. 14 — Today marked the 45th anniversary of the 1974 March Against Racism in Boston, when 25,000 people came out to say, “No to Racism” from around the country. Workers World Party held a forum here this afternoon to commemorate this important anniversary. 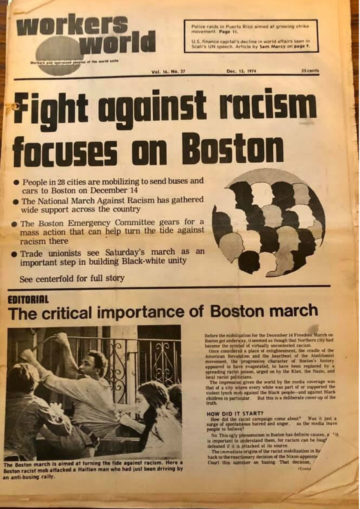 The Dec. 20, 1974, edition of WW newspaper featured a front page article by Andy Stapp, which began, “The most massive and militant demonstration against racism held anywhere in the United States for a decade took place today in the city of Boston.

“The march was called by the Emergency Committee for a National Mobilization Against Racism (ECNMAR), an organization set up to counter the racist and fascist groups which have been instigating lynch mob attacks on Black people here under the code slogan of ‘fighting busing.’ ”

Larry Holmes, First Secretary of WWP, was the keynote speaker. He was a national organizer of the March Against Racism and a Vietnam War veteran, who organized GIs to resist the war from the inside. The racists and fascists had created a climate of fear in the city after a federal court ordered desegregation of the Boston Public Schools.

Holmes told the meeting, “The movement was paralyzed. We decided to intervene and have a march. We were a small party; the march changed the party. We were coming to the defense of the Black community. We understood how racism is used to divide — this was the way to assert unity. Some say, ‘Don’t mention racism.’ We don’t agree. We need this unity to defeat capitalism.”

Frank Neisser, a leader of WWP in Boston and a march organizer, described the racist terror gripping Boston and recounted how Boston City Hall was taken over by the fascist, racist group ROAR (Restore Our Alienated Rights).  They had their initials displayed in the windows of City Hall. 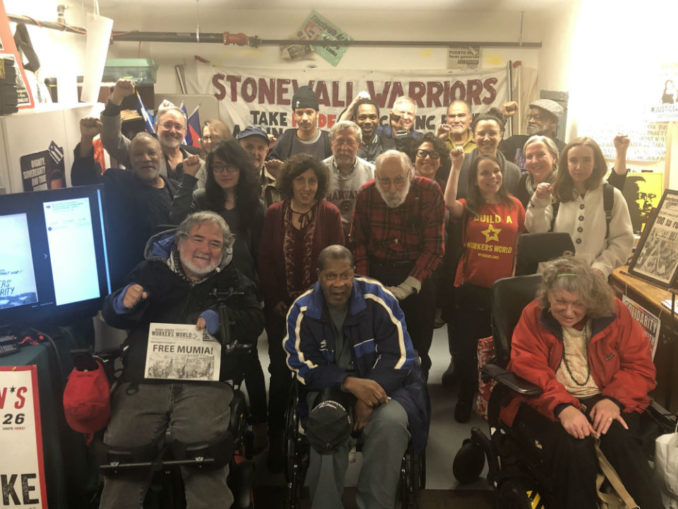 A group of WWP members and allies at the conclusion of Dec. 14 forum in Boston.

In just seven weeks ECNMAR distributed almost half a million flyers across the city. Tenant groups, unions, church groups and community organizations were met with, won over and organized into action. This was despite the real danger of being hurt or even killed while organizing.

Ed Childs, UNITE HERE Local 26 retired chief shop steward, described the battle to take Boylston Street — a main shopping area with high-end stores — during the march. Several politicians, including the mayor, were trying to prevent anti-racist marchers from going there, even though racist marches had gone down this street with no obstacles. Despite a police attack and some arrests, the marchers prevailed.  Childs noted that after the anti-racist march, the marches called by ROAR and other right-wing groups became notably smaller and weaker.

The forum was chaired by Maureen Skehan, a WWP leader, and Robert Traynam, a leader of Steelworkers Union Local 8751, representing the Boston School Bus Drivers. The militant USW 8751 grew out of the struggle against racism and for equal, quality education during this period. Traynam, recently retired, drove Black children to school while having his bus pummeled with racist insults, rocks, bottles and sometimes gunfire by mobs of incensed racists. All the while, he tried to protect the children from harm, telling them to hide under their seats.

Holmes summed up Dec. 14, 1974, when he remarked, “We had to liberate Boston from the grip and fear of racism. The demonstration had to be defiant and march down Boylston Street. We came to push them back and we succeeded.”