The United Auto Workers is in a serious crisis — perhaps the biggest in its 84-year history. A federal investigation has exposed widespread corruption at the highest levels of leadership, involving misappropriation of member dues, kickbacks from vendors and accepting bribes from Fiat Chrysler Automobiles. Some officials and staff have pleaded guilty or been convicted. 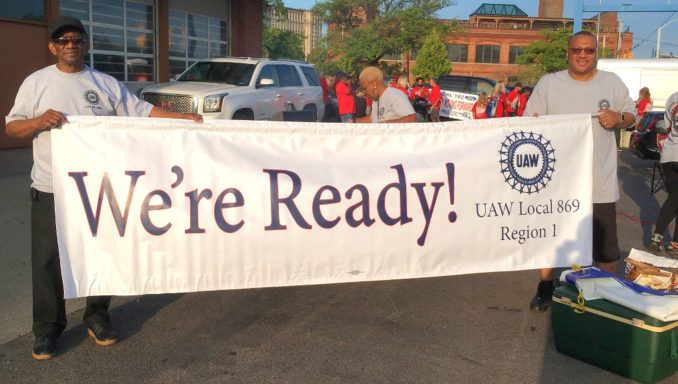 On Detroit Labor Day 2019, UAW members made it clear they were ready to strike.

The International Executive Board filed charges under the UAW Constitution against Gary Jones and Vance Pearson, until recently the union’s International President and Region 5 Director, respectively. The IEB charged the two with misappropriating funds while Jones was Director and Pearson Assistant Director of Region 5. Union funds, disguised as expenses related to trainings, were reportedly spent on golf equipment and clothing, expensive meals, alcohol and cigars, as well as lavish condo rentals — accommodating the bourgeois aspirations of officials and their staff.

Jones and Pearson resigned their positions and membership in the UAW. Rather than find a replacement for Pearson out of scandal-ridden Region 5, the IEB — now under the leadership of new President Rory Gamble — disbanded the Region.

Gamble has instituted a number of measures to strengthen ethics oversight. A home constructed at the union’s northern Michigan training center for previous President Dennis Williams — also implicated in Region 5 corruption charges — is to be sold. While these steps are positive, much more can be done.

At the 2018 UAW Constitutional Convention, delegates (under pressure) approved huge salary increases for the IEB and International staff, raising the president’s salary to over $200,000 a year. Under the recently negotiated contracts, a newly hired temporary employee at Ford, General Motors and FCA would have to work over 12,000 hours a year to earn that much.

Couldn’t the IEB, as an anti-corruption gesture, take a voluntary pay cut?

Keep the feds out!

The biggest danger now — much bigger than rampant financial misconduct — is that U.S. Attorney Matthew Schneider has made an ominous threat to 400,000 UAW members to impose federal oversight on the union using federal racketeering law.

Schneider is no friend of labor. He was appointed by former Attorney General and known bigot Jeff Sessions. As attorney for then Gov. Rick Snyder during the Detroit bankruptcy, Schneider argued that city workers’ pensions were not legally protected.

“I don’t think that [Gamble’s changes] means that [the UAW is] cooperating with the Justice Department so we can bring justice to the victims who are the UAW members, so far,” said Schneider. (Detroit News, Dec. 2) That statement is pure, unadulterated hypocrisy.

The timing of the threatened federal racketeering lawsuit — after the six-week strike against GM and with contract negotiations at the Detroit Three auto companies completed — is hardly coincidental.

The entire union movement should be speaking out loudly against any intrusion into the day-to-day operations of the UAW by the viciously anti-union Trump administration. So far, AFL-CIO President Richard Trumka has been silent.

Grassroots UAW activists have taken independent initiatives. Several locals have passed resolutions calling for a Special Convention. Its stated purpose would be to establish a process for members to elect the IEB by direct election — “one member, one vote” — instead of by Convention delegates, who are pressured to vote for candidates of the officialdom’s “Administration Caucus,” which all current IEB members belong to.

In 2010, in a three-article series titled: “Two choices for the UAW: Class struggle or suicide,” this newspaper stated, “The militant tradition of the sit-downs of the 1930s and the lengthy, valiant strikes of the following decades must be revived.”

Instead, the failed strategy of labor-management “cooperation” has become more entrenched, saddling the membership with concessions, while feeding the bourgeois aspirations of well-paid bureaucrats. Now, ugly, embarrassing corruption scandals have raised the specter of a state takeover.

After UAW Ford workers ratified — with sizable opposition — a new contract, President Gamble said, “Ford’s commitment to job security and assembly in the United States is a model for American manufacturers.” Ford, in turn, stated: “Working with the UAW, we have added flexibility to our operations while keeping labor costs in line.” (Detroit News, Nov. 15)

Keeping wages “in line” was accomplished by maintaining the divisive pattern of setting lower pay scales for future workers. This followed the pattern agreed to with the GM contract that ended the strike. Last came an even weaker contract with FCA; voting on that was completed Dec. 11.

Despite the allure of huge bonuses, combined with general skepticism that a “no” vote would get the leadership to win any significant improvements in the contract, nearly 30 percent of the vote went against the agreement. Many FCA UAW members did not see much point in voting at all.

Top-down measures to increase ethical oversight are not enough. The rank and file must be given the go-ahead to restore integrity to their union, which for decades has functioned on a moribund model of top-down, corporate-model business unionism.

This model must be dismantled, not modified. The monopoly of power, held by the Administration Caucus since the McCarthyite purges of left-wing leaders in the 1940s and 1950s, must end. The “partnership” with the corporations must be completely broken up.

Fortunately, workers on the plant floor — who showed their will and capacity to fight the bosses during the GM strike — have started a movement to turn things around.