A packed hall of mainly young activists attended a showing of the remastered 1971 documentary, “The Murder of Fred Hampton,” at the Solidarity Center in New York City on Dec. 7.  The film showing was co-sponsored by the Peoples Power Assemblies/NYC and Workers World Party. 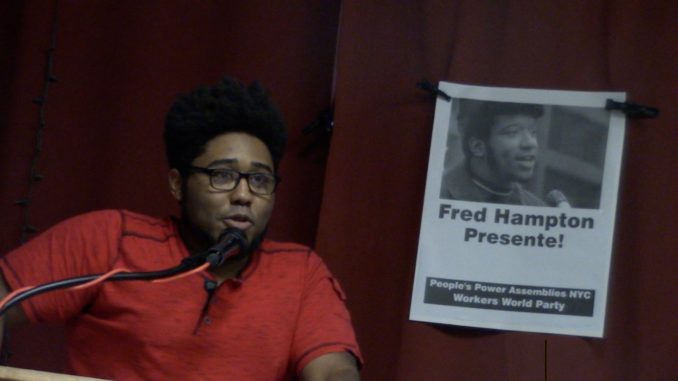 Hampton had been the chairperson of the Illinois chapter of the Black Panther Party and deputy chair of the national BPP. At the age of 21, he was assassinated by police on Dec. 4, 1969, while asleep next to his partner, Deborah Johnson, who was eight months pregnant. Following this cowardly act on the part of both Chicago and state police, demonstrations sprang up around the country calling to “Avenge Fred Hampton.”

Makasi Motema, a leader of the PPA, introduced the film by providing historical background on the Panthers.  Motema talked about the Panthers’ stance on self-defense against racist state terror and also their programs that provided free breakfasts for children, free medical care and free revolutionary education for Black communities around the country.  The film showed the interaction between the Panthers and the people they were serving.

Larry Holmes, First Secretary of WWP, praised the Panthers for their position on fighting racism and for upholding the right to self-determination of all oppressed peoples, an ongoing global class struggle today.

Holmes remarked that the Panthers were the most dynamic Black Liberation organization during the mid-1960s and early 1970s, which sought to unite with other like-minded revolutionaries and movements.  For example, on Aug. 15, 1970, one year after the historic Stonewall Rebellion in New York City, BPP Minister of Defense Huey P. Newton stated: “Homosexuals are not our enemies.”

After the film showing, Fred Hampton, Jr. spoke to the audience by telephone, quoting his dad’s revolutionary message:  “Dare to struggle, dare to win.”