Under a capitalist society, the ruling-class-biased media attempt to isolate almost every development challenging the divide-and-conquer system that puts profits before human needs. For instance, whenever the police murder a youth or disabled person of color, the media will either defend the police or even say there are “good” cops and “bad” cops. The media will never say that the police as a force exist to repress the workers and oppressed in order to protect the private property of the super-rich.

This premise holds true for mass culture, such as sports, which is more than just leisure and entertainment — it is connected to politics. Sports cannot be divorced from capitalist society with its racism, sexism and LGBTQ+ oppression, or from growing movements fighting for social justice.  The heroic stance that Colin Kaepernick took three years ago when he took a knee against racist injustice is a perfect example of this stark reality.

While there are many examples of this connection, some more prominent than others, here are three examples. 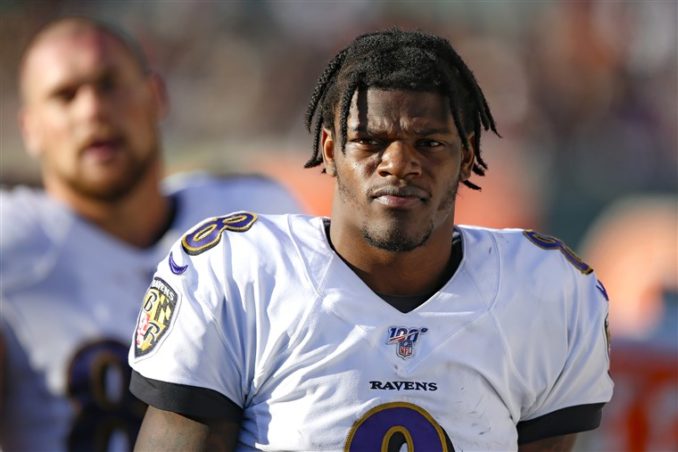 Next August will officially mark the centennial of the founding of the National Football League — a major milestone since professional football remains the most popular sport in the U.S. Like many other sports in this country, football was not immune from racism, sexism and other forms of bigotry. Running back Kenny Washington, a classmate of the great Jackie Robinson, was the first Black player to sign an NFL contract in 1946 with the Los Angeles Rams — over a third of a century after the NFL’s founding.

It would take another 22 years before Marlin Briscoe took the field as the first Black quarterback as a Denver Bronco. The quarterback, as the playmaker and leader of the team, is considered the most prestigious player. Quarterbacks are revered more as being highly intellectual than being gifted with physical abilities. Based on racist stereotypes, Black college quarterbacks have been forced into other positions, such as receivers or defensive backs if they were drafted into the NFL, because their intellect was considered inferior by white NFL owners.

Lamar Jackson Jr., the 22-year-old Black quarterback for the Baltimore Ravens, is considered the most dynamic player in the NFL today. A 2017 winner of the Heisman Trophy, which annually recognizes the best college player, he is the frontrunner to win the Most Valuable Player award in the NFL for the current regular season.

A white San Francisco 49er play announcer, Tim Ryan, made the following statement about Jackson the day after the Ravens beat the 49ers on Dec. 1: “He’s really good at that fake, Lamar Jackson, but when you consider his dark skin color with a dark football with a dark uniform, you could not see that thing. I mean you literally could not see when he was in and out of the mesh point.” (KNBR radio, Dec. 2)

The 49ers suspended Ryan for one game following the racially insensitive comment. Many fans felt he should have been fired. Many commentators, both Black and white, stated that the suspension was an overreaction — that his statement was “stupid” and “ignorant” rather than being racist because he is a “nice” guy.

Saying someone is a nice person or being oblivious to their comment’s impact amounts to obscuring the real issue. Whether an insensitive statement made by a white person about a person of color is overt or covert, it is still racism, pure and simple. It cannot be taken out of the historical and political context of white supremacy emanating from ruling class ideas that permeate every fiber of U.S. society. 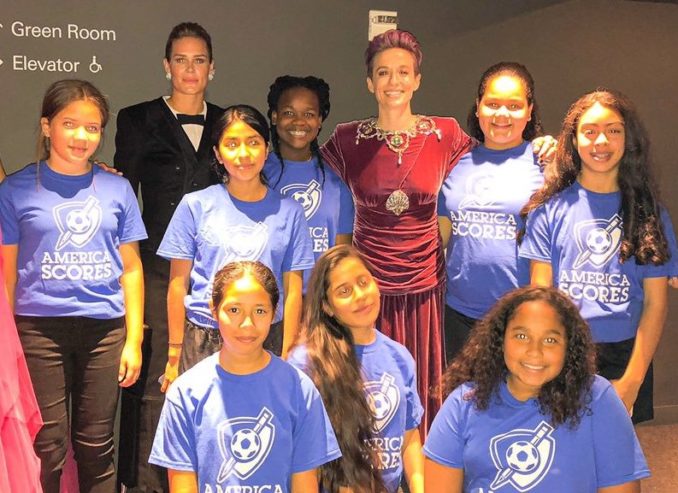 Megan Rapinoe, center back row, is an anti-racist lesbian, co-captain of the U.S. women’s national soccer team and supporter of Colin
Kaepernick. She is pictured with Harlem’s Mott Hall Girls Soccer Team after she received an award.

Megan Rapinoe is arguably one of the most famous and influential soccer players in the world. She is co-captain of the U.S. Women’s National Soccer Team, which won the World Cup title in July. Rapinoe is an out lesbian who has been outspoken in demanding that U.S. women soccer players receive the same pay and benefits as their male counterparts.  Even before winning the World Cup, Rapinoe declared, “I’m not going to the fucking White House,” which has been a tradition for most championship teams. (si.com, Dec. 9)  In fact, none of the team went to visit Trump.

Rapinoe, who is white, began to kneel during the playing of the national anthem before games in 2016 to protest racist police brutality, inspired by the actions of Black, former NFL quarterback Colin Kaepernick.

In her acceptance speech, Rapinoe said: “So while I’m enjoying all of this unprecedented — and, frankly, a little bit uncomfortable — attention and personal success, in large part due to my activism off the field, Colin Kaepernick is still effectively banned from the NFL for kneeling during the national anthem in protest of known and systematic police brutality against people of color, known and systematic racial injustice and known and systematic white supremacy.

“I see no clearer example of that system being alive and well than me standing before you right now. It would be a slap in the face to Colin, and to so many other faces, not to acknowledge, and for me personally to work relentlessly to dismantle that system that benefits some over the detriment of others, and frankly is quite literally tearing us apart in this country.” (USA Today, Nov. 12)

Rapinoe also won the prestigious women’s Ballon d’Or award in France on Dec. 2 due to her dominant role in the World Cup win in July. Instead of talking about the award, 34-year-old Rapinoe verbally took to task the three biggest male soccer players in the world — Cristiano Ronaldo, Lionel Messi and Zlatan Ibrahimovic — for remaining silent on issues of racism and sexism.

She told France Football, “I want to shout: ‘Cristiano, Lionel, Zlatan, help me!’  These big stars do not engage in anything when there are so many problems in men’s football.

“Do they fear losing everything? They believe that, but it is not true. Who will erase Messi or Ronaldo from world football history for a statement against racism or sexism? They grew up in a bubble because of their exceptional talents. They were cut off from the real world and had everything at 20.

“I am both sad and angry. I would describe discrimination to them. I would also tell them we need support from men, even if they are not the first affected. They must be our allies.

“Imagine the impact if Cristiano Ronaldo said: ‘We must invest in female football.’ It would be enormous [if Messi left the pitch because of racist chants]. The referee would not dare to send him off.”  (ESPN, Dec. 2) So far, none of the three players has responded to Rapinoe.

On Dec. 9, Rapinoe was named sportsperson of the year for 2019 by Sports Illustrated magazine. 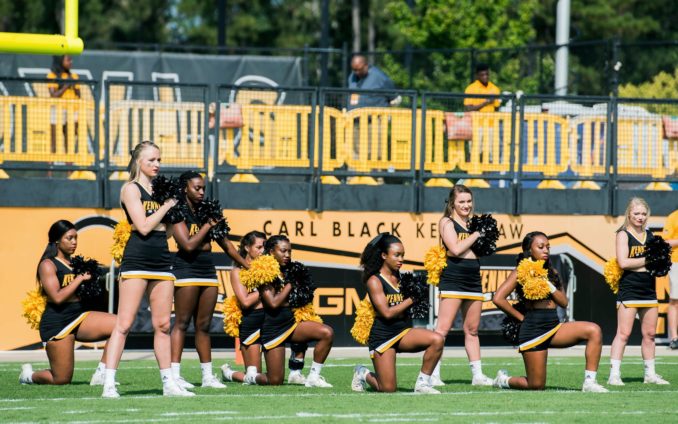 On Sept. 30, 2017, five African-American cheerleaders at a Georgia college took a knee during a football game to protest police brutality and racial inequality. This was just one of many protests that were taking place on and off the field during this period, inspired by Colin Kaepernick.

As a reprimand, Kennesaw State College banned the cheerleaders from appearing at the next two home games. One of the cheerleaders, Tommia Dean, brought a lawsuit in September 2018 against the former president of the college, two members of the athletic department, a Cobb County sheriff and a former Republican state legislator, charging them with violating her constitutional right to protest.

This October, Dean, who cited the emotional stress she suffered because of the suspension, was awarded a settlement of $145,000 from the Georgia Department of Administrative Services. One of her lawyers, Bruce P. Brown, stated: “Kneeling during the national anthem is respectful and a completely appropriate protest that should be protected by the university under the First Amendment. It should not be prohibited or punished, ever.” (New York Times, Dec. 7)