On Nov. 22, strikers at the Battery Wharf Hotel voted 100 percent to approve a new contract and returned to work after 79 days on the picket line.

Westmont Hospitality Group, owner of Battery Wharf Hotel, had been determined to break the strike by digging in and refusing to negotiate. But the determination of the mostly im/migrant strikers was greater. 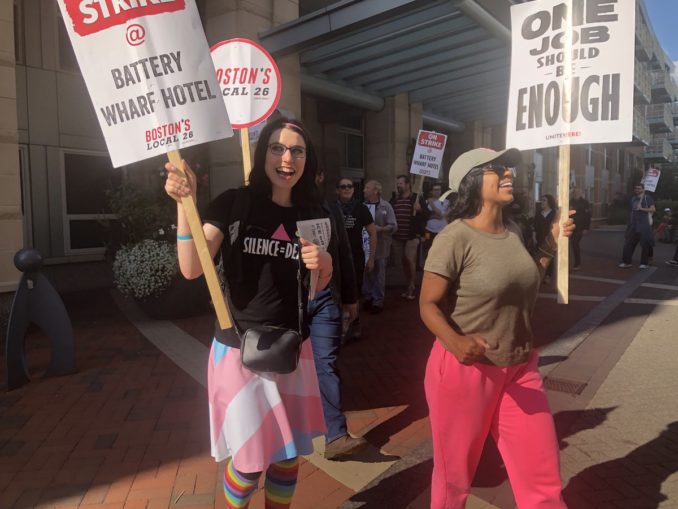 While the hotel owners sat in heated luxury rooms, strikers picketed 12 hours a day for those 79 days, literally on the wharf of this Atlantic seaport in icy wind, rain and snow. They marched, chanted and drummed. The 75 strikers are from all over the world and are represented by UNITE HERE Local 26. Their work is setting up and staffing banquets, cleaning rooms, taking out the garbage, cooking, waiting tables, cashiering and greeting customers. They are inspiring to anyone who spent time on the picket line.

As of this writing, the gains the workers won have not been made public by the union. But the union has said that the Battery Wharf workers won the provisions that Marriott hotel workers won after striking in 2018 for 46 days at seven hotels in Boston. Those gains included wage increases, increased pension contributions, protections for im/migrants against discrimination and terms addressing job security, more stable schedules and affordable family health care.

One of the issues the Marriott strikers fought hard for and won are protections for housekeepers against sexual and racial harassment, including “panic buttons” for housekeepers if threatened by attacks. The buttons are carried by the workers and when pushed alert security guards and give the worker’s location. This was a huge issue for the Battery Wharf strikers, and word is that they won these provisions.  Housekeepers are predominantly women of color, and in the hotel industry, sexual and racial harassment and assault are common.

Housekeeper Fatoumata Bah, a Battery Wharf strike leader, told Vox website on Oct. 1, “Sometimes [the guests] stay in the room while you clean, and you have no idea what they are going to do to you. I’m so worried about my safety.” The article noted that Bah described an incident that left her traumatized — when she feared an enraged guest was going to beat her: “He was right in front of my face yelling. He could have hurt me, and no one would know.” When Bah ran out of the room, she called security, but no one came or asked if she was okay.

Battery Wharf strikers won this victory with solidarity and militant tactics that included following the founder and president of Westmont Hospitality, Majid Mangalji, to various cities. They confronted him at conferences demanding protections against sexual and racial harassment and assault.