Over 100 activists and community members from across the country came together in Philadelphia Dec. 7 for an event that linked the struggle to free Black journalist Mumia Abu-Jamal, imprisoned in the U.S. for the last 37 years, with the international struggle against empire and capitalism. 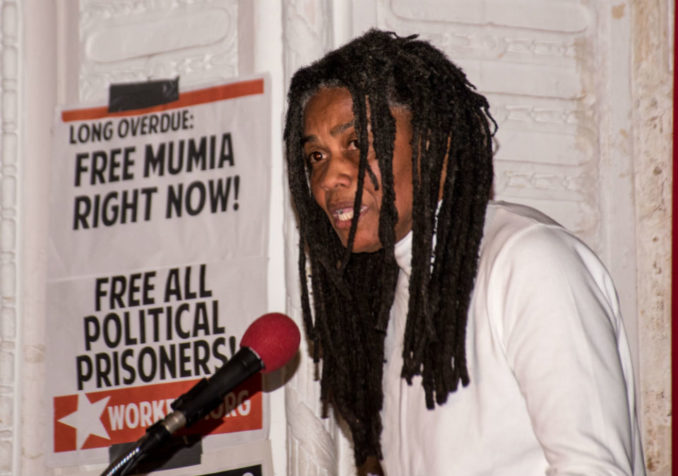 The event, hosted by Mobilization for Mumia and the International Concerned Family and Friends of Mumia Abu-Jamal, featured speakers from various progressive and anti-imperialist organizations. They included Ant Smith and Megan Malachi from Philly for REAL Justice, Glen Ford from Black Agenda Report, William Camacaro from the Bolivarian Circle of New York, and Yahne Ndgo from Black Alliance for Peace.

MOVE member Ramona Africa, sole survivor of the 1985 bombing in West Philadelphia by Philadelphia and state police, helped open the event by reading the names of fallen revolutionary soldiers and organizers.

Johanna Fernandez of the Campaign to Bring Mumia Home provided an update on the legal side of Mumia’s case. (For more on this, see “New stage in the struggle to free Mumia,” Workers World, Dec. 5.) 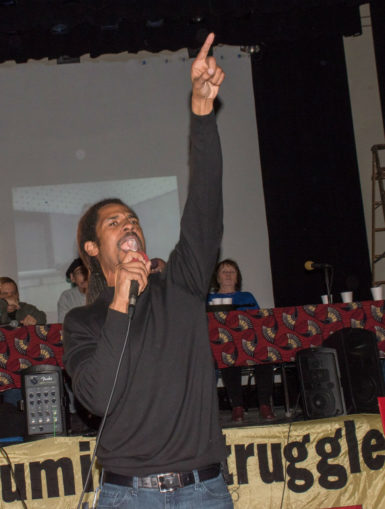 Mike Africa Jr., exhorting the Philadelphia forum, was ‘born on the MOVE’ to political prisoner Debbie Holloway Africa while she was jailed.

Mumia calls in from prison

Mumia Abu-Jamal was able to speak directly to those in attendance, calling in to the event from SCI Mahanoy, the Pennsylvania state prison where he is serving a life sentence for a crime he did not commit. With his trademark wisdom, humor and real talk, Mumia kept the audience at rapt attention.

“It’s an ugly time,” Mumia said. “The air is foul. The water is foul.” Referring to the MOVE founder who was killed when police bombed their house, Mumia said, “John Africa was an environmentalist. He said that water is a potion that gets poisoned when the system gets ahold of it.

“It’s not about me, it’s about us,” Mumia added. “If we don’t start thinking that way, shit is about to get real.”

Between panel discussions, attendees participated in workshops hosted by various event organizers. Workers World Party hosted a class and discussion based on Mumia’s recent two-volume work, “Murder Incorporated,” and laid out why anyone who struggles to fight racism must also fight imperialism. The Philadelphia branch of WWP will be hosting monthly anti-imperialism discussions focused on reading the writings of Mumia and other freedom fighters.

Other workshops included “A Conversation on Black Liberation,” hosted by Gabriel Bryant, and a discussion about Latin America and the Caribbean featuring Carmen Guerrero of the Coalicion Fortaleza Latina and Taryn Fivek of the International Action Center.

“The movement to free Mumia has consistently fought for his freedom over the last 38 years,” said Megan Malachi of Philly for REAL Justice. “This movement is funded by the hard labor and funds of the people. The oppressed. We are up against a rotten and decadent system with seemingly unlimited resources. A system of violence and avarice, but we are brave and we will win.

“We are going to bring Mumia home and all our incarcerated people home, but we need your help. We leftists don’t like to discuss money, but in this capitalist system, we need funds to free our people. We humbly ask that you donate what you can.”

Food Not Bombs Solidarity provided food for the event and raised funds to support the Youth Bailout Christmas Fund.

Workers World urges readers to visit mobilization4mumia.org and donate what you  can to the struggle to free Mumia Abu-Jamal, as well as Chuck and Delbert Africa.