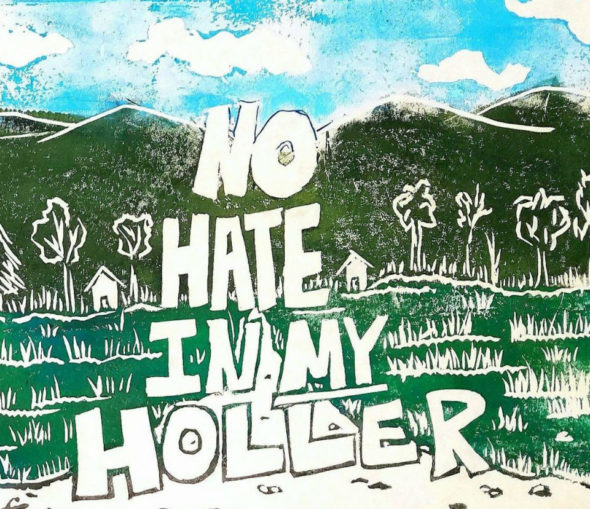 ‘No hate in my holler’ became a rallying cry in Appalachian states during the 2017 protests against white supremacist, neo-Nazi marches.

The photograph was taken during the West Virginia Division of Corrections and Rehabilitation Basic Training #18, held from Oct. 21 through Nov. 27.  A caption on the photo reads, “Hail Byrd!” — a reference to one of the session trainers.

Shortly after its release, the image began to circulate online and made international news. Progressive journalist Shaun King was able to get a photo of the training class with unblurred faces and posted that. Several anti-fascist activists in the state are trying to use that image to identify participants in the Nazi salute and find as much information about the fascist officers as possible.

Three days later, state authorities fired two of the trainers and one of the officers, while everyone in the photo was placed on suspension.

Even though some action was taken by the state government, many conversations going on in West Virginia indicate that people think this has not been enough. Some who are usually “pro-cop” are actually saying all participants should be fired and barred from ever being hired in a police job. It remains possible that the three individuals terminated will be employed somewhere else within so-called law enforcement, while those suspended will most likely be able to go back to work without any punishment.

Time and time again police and corrections officers fired from one town, county, state department or prison get rehired somewhere else.  It is very rare for cops to face any jail time even for rape or murder. In fact, they are often rewarded with employment in another location.

Oppressed people in the state were especially impacted by the picture. As Danielle Walker, an African-American state legislator, commented on social media, “If I hear one more person claim there is no racism or discrimination in this state or the USA, I’m going to say, ‘Look around.’”

Owens Brown, the state president of the West Virginia NAACP, told this writer, “The picture is another black eye for the state. It reinforces the national perception that [West Virginia] has a hostile environment for Black and Brown people.”

Racist symptom of a capitalist system

While many people who saw the picture were in disbelief, anti-racist activists and revolutionaries were not surprised by what they saw. The police in the U.S. were created as slave patrols and strike-breakers. The police, along with their correctional colleagues inside the prison system, have targeted, harassed, abused and brutalized people of color in the U.S. for centuries.

In the era of the Trump administration, racists and fascists have been given a green light to be open about their bigotry.  President Trump has even gone so far as to call neo-Nazis “good people.”

Anyone who has ever been to a protest against police brutality or white supremacy is probably familiar with the chant, “Cops and Klan go hand in hand.”  This is no exaggeration. Not only do the police always protect hate groups in the streets, with police weapons pointed toward the anti-fascist demonstrators, the police and corrections officers have an historical connection with white supremacist groups.  This writer has heard formerly incarcerated individuals comment on how correctional officers in particular have close relations with the neo-Nazi prison group known as the Aryan Brotherhood.

West Virginia state government officials, such as Gov. Jim Justice and U.S. Senator Joe Manchin, have denounced the picture as “disgusting” and “disturbing.”  But neither Justice nor Manchin should be viewed as allies in the struggle against white supremacy. Both of them are backers of Trump and should therefore face some of the blame as accomplices in a sick system that lays the groundwork for such ultra-racist and neo-Nazi behavior to exist

The system of police and corrections officers in the U.S. is inherently racist, created to protect the property of the owning class and to suppress any individual or collective uprising against an unjust system.

The release of the ugly image from West Virginia once again ripped off the mask of the “criminal justice system” under capitalism. A socialist revolution is the only true solution to abolish the threat of fascist police.