A militant picket line of 50 workers and supporters marched outside Oregon Public Broadcasting on Dec. 6, chanting ‘Union busting? That’s disgusting!” They were demanding that OPB negotiate a decent contract and stop trying to gut their union. The workers are represented by Service Employees Local 570. The union’s chief negotiator called OPB’s recent offers the most anti-union proposals seen in the state. 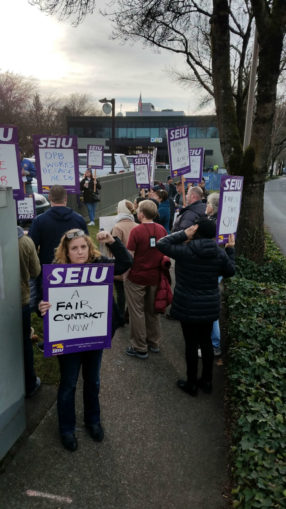 Union research shows that every job position at OPB is assigned a wage under market rates. Merit raises in 2019 were 2.88 percent, while the cost of living in Portland increased to 3.59 percent. OPB also wants to eliminate guaranteed merit review raises for union workers; non-union workers don’t have guaranteed raises.

OPB is currently rejecting the workers’ power to bargain for wages or health care and wants to eliminate strike dues deductions. The company is also preventing basic data sharing, denying the union’s right to know who is in the union or how to contact them.

“Many people don’t actually know we have a union,” said Ikesha Owens, president of Local 570. “We do have a union. It’s important because we have more power when we organize together.”

The union first requested negotiations in February. In May they agreed to extend their contract for six months so OPB could complete a $5 million renovation to the station. That contract extension expires Dec. 31 and workers are tired of waiting.

Steve Bass,CEO at OPB, makes $394,921 a year. He’s the third highest paid CEO in Oregon. About 64 percent of OPB funding comes from listener donations; with 120,000 subscribers, OPB is one of the best-supported public broadcasting services in the U.S. Another 29 percent of OPB financing is from corporations and federal support through the Corporation for Public Broadcasting.

Like other mission-driven nonprofits, OPB is part of the capitalist system. Even if it is not technically creating profit, management is being well paid while forcing oppressive conditions on the workers.

Union victories are on the rise in so-called “liberal” and cultural workplaces — prestigious publications, museums, theater companies and service organizations.

After workers at Webnews, DNAinfo and Gothamist voted in 2017 to join the Writers Guild of America East, their boss Joe Ricketts shut down the websites and laid off 115 employees to punish them. In response, WGAE organized a demonstration in New York City where more than 300 people joined the “fight against the billionaire war on journalism.” (Workers World, Nov. 22, 2017)

In Utah early in 2019, more than 80 percent of workers at the Salt Lake Film Society voted to join the Alliance of Theatrical Stage Employees. The workforce of cleaners, ticket sellers and projector operators — demeaningly called “popcorn people” by management — included mainly young people, people of color, women and LGBTQ+ people. In April, the union became official.

Boots Riley, writer and director of “Sorry to Bother You,” congratulated the theater workers who came together to form a union: “It’s not just the fight … that exists in front of you; it’s about the story that is being told to millions of other people that will be finding out about what you’re doing … not just theater workers, but fast food workers, anyone, retail workers — so what you’re doing is very important. And I’m inspired by you.” (WW, June 9)