Seven years of France fighting to control Mali burst into the open Nov. 25 as two French military helicopters collided. They were trying to land commandos on a totally dark night in a cloud of fine black sand that the copter blades had kicked up. Thirteen French soldiers died instantly. 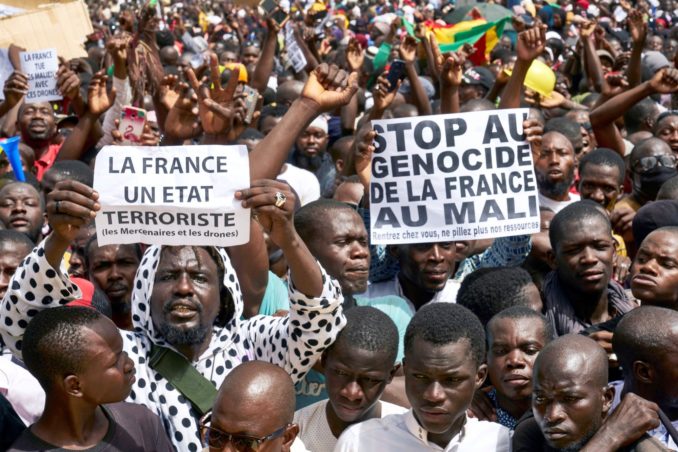 French army spokespeople called it an accident. The insurgents who have been fighting France’s rule said they shot down the helicopters.

The deceased commandos were given a big, glorious state funeral Dec. 2 at Les Invalides, national monuments in Paris to the French military. President Emmanuel Macron  gave a fulsome oration about sacrifice in the “struggle against terrorism.” Generals talked of the heroism of these fallen fighters, and religious leaders  blessed their souls.

While most French politicians repeat the lie that France is fighting in Mali to defeat terrorism, some — particularly members of La France Insoumise (France Untamed Party) — have questioned the military intervention, its impact on the people of Mali, and how the army will extricate itself.

In recent demonstrations in Bamako, the capital of Mali, some signs have called France a “terrorist state” and called for stopping “French genocide in Mali.”

A coalition of Malian community organizations and political tendencies in France called for a big demonstration in Paris on Nov. 30 to protest the “nefarious interference of foreign forces” in Mali and to support Mali’s army. (maliactu.net, Nov. 28)

Mali is a very poor, landlocked country in the Sahel region of Africa with nearly 20 million people. Some 65 percent of it is desert, and most of the country supports itself through subsistence farming or fishing. Its neighbors Niger and Burkina Faso are also landlocked, poor and with large areas of desert. They were all seized by French colonialism in the 19th century and won nominal independence in 1960.

However, France has some 4,500 troops in Mali, who have taken about 30 casualties in recent fighting. The only other European country with troops operating in conjunction with French imperialism is Estonia. It has 50 soldiers at a guard post in Gao, a small Niger River town in eastern Mali. Gao, historically a major trading center in Trans-Sahara commerce, was the capital of a breakaway region of Mali called Azawad that French forces finally recaptured in 2013.

Besides France, the European Union has a military mission in southern Mali. The stated goal of the 569 soldiers from 27 different European countries in this mission is “training” the Malian army.

There is also a U.N. “stabilization force” called MINUSMA with about 12,500 soldiers and 1,800 cops, headed by a Swedish general. A majority of MINUSMA’s soldiers are from African countries. MINUSMA has taken more than 200 casualties since it was established in 2013.

The U.S. military has openly provided some logistics support to the French forces — moving supplies. The Pentagon also has a major $120 million drone base in neighboring Niger at Agadez. Washington undoubtedly supplies intelligence to its imperialist partner France.

According to the major French bourgeois newspaper Le Monde (Nov. 25), leading French politicians say that the French army in Mali doesn’t have the military initiative. It is mainly reacting to its opponents’ attacks. There is a secretive military alliance called “Takuba” (“Sword” in the local Tuareg language of Tomachek) that is composed of special forces from France, Great Britain, the Czech Republic and the U.S., whose goal is to regain the military initiative in Mali.

Even on the edge of the Sahara Desert in the middle of Africa, the resistance to imperialism has put down deep roots that neither France nor the U.S., working separately or together, has been able to rip up.