Nov. 2 — The family and supporters of Anthony Hill filled a DeKalb County courtroom and an overflow room to hear the sentence for ex-cop Robert Olsen.

Hill, a 26-year-old African-American veteran, was shot and killed by Olsen in the parking lot of his apartment complex March 9, 2015. Housing staff had called 911 seeking help for Hill, who was observed naked and wandering in an erratic manner. 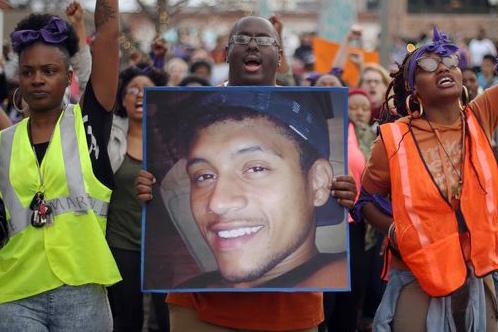 One of the many protests for justice for Anthony Hill

An Air Force veteran of the U.S. war on Afghanistan, Hill had been diagnosed with PTSD, but had stopped taking his meds because of damaging side effects.

Cop Olsen had been told the call was possibly for a mentally disabled person in crisis. He knew that backup was on the way. But immediately upon stopping his patrol car, he drew his gun, and within seconds he had shot and killed Anthony Hill. Olsen claimed he was in fear for his life.

After six days of jury deliberation, Olsen was convicted of four of the six counts lodged against him by a grand jury.

While a divided jury failed to convict Olsen of two counts of felony murder, Black jurors successfully made the case for guilt on aggravated assault, making a false statement and two counts of violation of oath. The potential maximum length of prison time for these four felony convictions was 35 years.

Prior to Judge LaTisha Dear Jackson issuing the sentence, four hours of additional testimony concerning Olsen’s record were heard. This included citizen complaints against Olsen, impact statements by Hill’s mother, father and sister, and character statements by Olsen’s family and friends. The 57-year-old Olsen was expected to make a statement, but he opted not to.

Hill’s family described the trauma of learning the details of Anthony’s death and the agony of years of delayed trials, as well as the spurious claim of self-defense by a policeman, who had many less-lethal choices than his gun.

Both parents, Caroline Baylor Giummo and Anthony Hill Sr., addressed the pain of not hearing Olsen express any remorse for killing their son.

Judge Dear Jackson then sentenced Olsen to 20 years, to serve 12 in prison and 8 on probation.

Olsen was also given five years each on violations of oath and making a false statement, to be served concurrently. He is barred from ever having another job in law enforcement, must relinquish his 13 guns, including an AR-15, and cannot profit in any way from his case.

While Hill’s family had urged the maximum sentence of 35 years, his parents agreed that “some time was better than no time.” (acj.com, Nov. 2)

At a press conference following the sentencing, Baylor Giummo thanked the team of DeKalb prosecutors, who pursued the felony murder charges despite knowing there is almost never a win on that charge if a cop is the defendant. She also expressed the family’s appreciation for those who had rallied and protested demanding justice for her son.

Besides the many who filled the courtrooms, there was a continuous presence outside the county building throughout the trial. Actions included a walkout of students from nearby Decatur High School on Friday, Nov. 2, who gathered on the court steps holding “Justice for Anthony Hill” signs.