Published on mundo.sputniknews.com on Nov. 6. Translation by John Catalinotto.

Nov. 6 — [Rightist opposition leader] Fernando Camacho could not leave the airport to get to La Paz. The inhabitants of the city of El Alto went to the airport entrance and did not let him leave. They spent the whole night until early in the morning so that the opposition leader from the city of Santa Cruz would not set foot in the political center of the country. 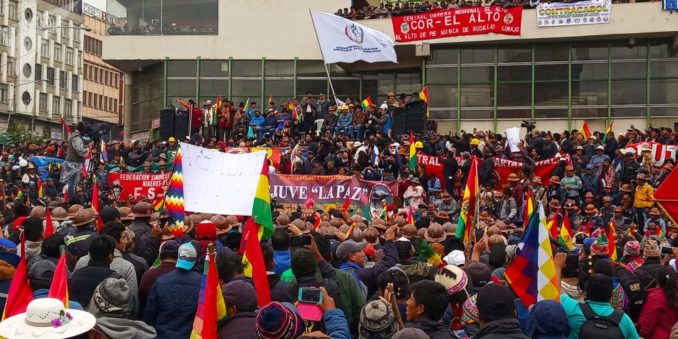 Camacho had announced [his plans] the night before, after the 48 hours he had given President Evo Morales to leave the government ended. In the public meeting he read a letter of resignation from Morales and affirmed that he would return from La Paz with the same letter signed by him.

His arrival at the airport awakened the expected reaction. El Alto is one of the territories where there is greater support for Evo Morales and a strong popular organization, with movements such as the Federation of Neighborhood Councils and the Parents of Families of El Alto.

Camacho had to return to Santa Cruz without the signed resignation and without having raised the popular support capable of demanding it. At the entrance to the airport there were about 2,000 people, many women, with hats, large skirts, colorful fabrics, and men of the people committed [to defend Morales’ government].

“Let him go to his Santa Cruz; he mistreats us, he hits us, he discriminates against us, calling us Indians; let him go, we don’t want him here,” said a woman surrounded by the picket line.

“This is our homeland; we voted for Evo and our [expletive] vote will be respected; El Alto on its feet, never on its knees,” said another woman at her side.

The voices of each of the people present repeated their defense of Evo Morales and their decision to prevent a right-wing government from returning, particularly by force. In Bolivia this means denouncing not only neoliberalism, but also the historical exclusion and contempt for Indigenous peoples and the poor.

A demonstration of strength

This Tuesday’s [Nov. 5] mobilization [defending Morales] was the biggest in recent times. At the head was the [labor federation] Central Obrera Boliviana (COB), with its leadership, its distinctive helmets, as well as the blasts of dynamite that seem to rumble up into the mountains. Columns descended from El Alto to La Paz crossing the city, with miners, Indigenous communities, neighbors, workers.

“From Santa Cruz they want to rule all the Bolivian people; we are not going to accept that. The Bolivian people are constituted by our culture, where there are miners, peasants, Indigenous people, an endless number of cultures and ethnic groups, and we are all Bolivians, and we are  mobilized across all sectors to demand that respect,” said Juan Carlos Huarachi, COB secretary.

People applauded the mobilization as it passed through the streets of La Paz. It is known that the power deployed by the movements that support and defend the process of change is one of the central factors in confronting the attempted coup d’état. The mobilization’s goal is both to dissuade the opposition from confrontational actions and to show that the Bolivian political process is not limited to merely staying in the government. This process has broad support.

The columns reached the center of the city where a ceremony was held in the presence of President Evo Morales, Vice President Álvaro García Linera, the COB leadership and the different movements that took part in the action.

Morales called for “confronting, rejecting, and defeating the coup d’état of the racists who are trying to regain political power ( … ) once again discrimination has returned, once again humiliating the people. They wrap themselves in the Bolivian flag to kick their brother,” he said from the grandstand of the crowded plaza.

The president reflected on the current situation and stressed that one of the objectives of the rightist actions is to damage the country’s economy, one of the most stable in Latin America.

“This strike, under the pretext of fraud and coup, is meant to damage the economy; they want to destroy what we have built with a lot of effort, a lot of struggle.”

His speech was given in the context of having managed to force Camacho back to Santa Cruz, with the certainty that the coup attempt still continues, but is in one of its most acute and desperate phases. That’s why Evo Morales referred to the need to avoid provocations, to avoid unleashing violent episodes, and highlighted the actions of the police: “We can’t exchange bullets among brothers.”

Camacho first proposed that Morales should resign within 48 hours, after [Camacho’s] seizure of public institutions, closure of borders and his coming to La Paz. Now that he has not succeeded, he has again threatened to try to return to La Paz this Wednesday [Nov. 13]. The leader of the Santa Cruz Civic Committee, which seeks to build national leadership, is acting in an escalation that the COB secretary describes as “desperate.”

The vice president of the national leadership of the Movement Toward Socialism (MAS), Gerardo García, makes the same analysis: “He [Camacho] no longer knows what to do; his desperation to reach the government has made him do childish things like coming with a letter of resignation to our president, knowing that our people are going to rise up. They are going to defend themselves.”

Desperate and dangerous, Camacho advances in a climb which he cannot reverse, and at every step he doubles his bet without achieving the results he promises. Yes, as part of his plan, he has succeeded in isolating Santa Cruz, unleashing opposition violence in its streets, as well as in the streets of Cochabamba and, to a lesser extent, in La Paz.

For this violence, he counts on shock groups that he has brought to La Paz, who act camouflaged within the opposition protests, such as the one he organized on Tuesday night in the center of La Paz. The aim is to generate the largest possible river of discontent.

The other opposition figure is Carlos Mesa, who came in second in the presidential elections on Oct. 20. Although Mesa is not in charge of the street mobilizations, he calls for them to be redoubled and asks for the resignation of the president, the Supreme Electoral Tribunal and new general elections.

Both Mesa and Camacho reject the ongoing audit of the votes, in which the Organization of American States and the Council of Election Experts of Latin America are present. “If one is sure there has been fraud, one should be happy to take all the evidence to the international organizations,”  Morales said during the ceremony.

Camacho seeks to speed up events and Mesa, in the media background, validates the escalation. In this context there was an accident in a helicopter in which Morales was flying on Monday afternoon, Nov. 4. Was it an accident or an attack? The investigation in progress has not yet yielded results.

In this context, days, nights and dawns of uncertainty are expected in Bolivia. There are still about 10 days before the audit is completed and the results are made public. The leader of Santa Cruz seeks to achieve his objective before that date.

But those who support the process of change led by Evo Morales have shown once again their capacity for mobilization, defense, the will to fight to defend a historic political project and prevent those who always excluded the humble from returning to political power.