This Nov. 9, the world’s imperialists and big capitalists will be celebrating the 30th anniversary of the fall of the Berlin Wall. They will fill the media, all too available to them, with lies claiming this event was a victory for democracy and freedom. They will be slandering the German Democratic Republic and all the good and progressive acts of the once-socialist part of Germany. 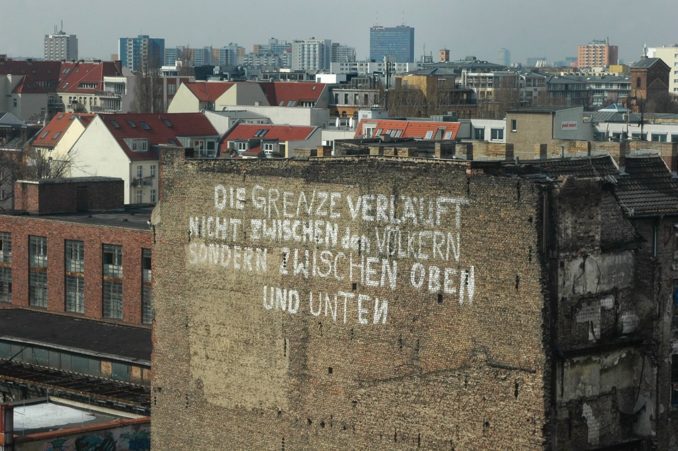 2006, Berlin. At an occupied building near the old border, is written, ‘The border does not separate ordinary people, but runs between those above and those below.’ (Photo: Gabriele Senft)

A partial antidote to these lies can be found in Victor Grossman’s book, “A Socialist Defector: From Harvard to Karl-Marx-Allee,” told by someone who lived in the GDR from the early 1950s until its fall, and still lives in the eastern part of Berlin. The book has only one author; Stephen Wechsler was Grossman’s name before he left the U.S. military when he was stationed in Austria. He swam across a river to escape what he feared would be a possible prison sentence — in reality a sentence for his pro-communist activities — common punishment in the McCarthyite 1950s.

Grossman’s book tells the story of the GDR’s 41-year existence through the eyes of someone committed to socialism, who was also an honest and careful observer of the everyday ups and downs of the fledgling socialist republic. He also describes with excruciating detail the annexation of eastern Germany by the victorious imperialist power in the West.

Even to focus on a little of what Grossman covers in his 352 pages may help explain why the fall of the GDR was a loss, both to the oppressed nations of what is today called the “global south” and to the East German working class and workers worldwide.

He writes, discussing so-called dissidents, “In contrast with the rulers in Bonn [capital of West Germany], the GDR generously aided the African National Congress in South Africa, SWAPO [South West African Peoples Organization] in Namibia, Ho Chi Minh’s Vietnamese, the Sandinistas [in Nicaragua] and the anti-Pinochet forces [in Chile].

“What would success of those dissidents, whose motivation was implacable anti-GDR hostility, mean to those struggles? ‘Human rights’ were demanded by people often totally uninterested in [Nelson] Mandela, Leonard Peltier or even the ‘Berufsverbote’ [exclusion from jobs like teaching] in West Germany, where some were jailed, many were fired and 1.4 million were investigated by the equivalent of the FBI because of their undesirable views.”

This reviewer was in East Berlin in October 1989 interviewing Angolan students, educated at the GDR’s expense at Humboldt University in how to set up and run beer breweries in their recently liberated country. It seemed an intelligent division of labor that socialist Cuba would help win the big military battle with South African troops at Cuito Cuanavale in 1988 and that the socialist GDR would provide technical and industrial education to the Angolan people.

Imperialist Germany had conquered Namibia in the 19th century, but the socialist GDR gave medical treatment to the wounded liberation fighters of SWAPO.

Divided Germany became the front line of a global class war between two social systems during the period known as the Cold War. The socialist countries, or workers’ states, were to the east; the imperialist countries with their capitalist system to the west. The line dividing east and west Germany could not avoid being a hot spot of the Cold War, which was not always so cold. 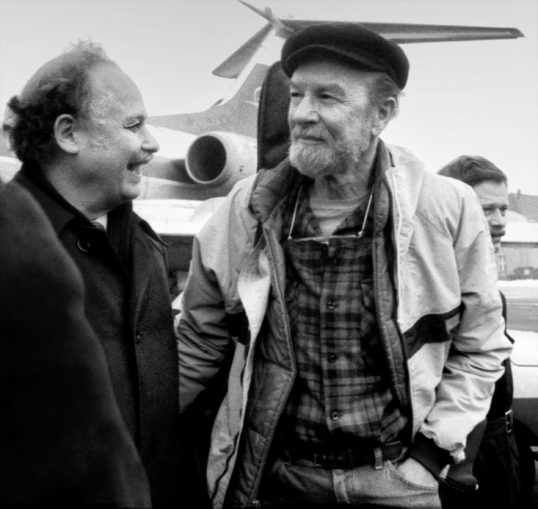 West Germany, one of the most prosperous of the imperialist countries, used its wealth to lure whatever defectors it could from the East. This was part of its war against socialism. In the opposite way, the Berlin Wall discouraged defections. In principle, it was not much different from union workers setting up a picket line to prevent discouraged workers from breaking a strike — only this was done by a pro-socialist state.

In the years after the Berlin Wall fell, those who lived in the East quickly discovered there was a lot that the GDR had accomplished. Unfortunately, they discovered it by losing their guaranteed jobs, universal child care — which especially harmed women — two-thirds of their public libraries, their low-rent apartments and almost-free public transportation.

West German industries and banks moved into the East, bought up for next to nothing the industries that had employed 4 million workers — with a market mainly in the former socialist countries — and in no time created an army of unemployed and precarious workers. Many workers had to migrate to the West. Grossman details how this happened and draws a clear picture not of a “reunification,” but of an annexation, much like an imperialist country seizing a colony.

While there was a GDR, the West German military stayed within its country’s borders. After seizing the GDR in 1990 and dissolving the GDR’s army, German imperialism intervened in Yugoslavia to tear that multinational country apart and gain economic hegemony in the mini-states that succeeded it. In Iraq and in Afghanistan, Germany joined the “coalition” led by U.S. imperialism.

Grossman’s book provides a contrast to the lying propaganda of those imperialists still rejoicing over the fall of the Berlin Wall.

Today, the over-90-year-old Grossman continues his writing by describing, in his Berlin Bulletin, developments in German politics with an explanation understandable for U.S. readers, who might not be following the day-by-day developments there. (For more about the bulletin, see victorgrossmansberlinbulletin.wordpress.com)