Nieves Ayress Moreno, from the La Peña del Bronx movement and former political prisoner of the civil-military dictatorship of Augusto Pinochet, read the following statement in Spanish on the current uprising in Chile at a Nov. 2 Workers World Party forum in New York City. 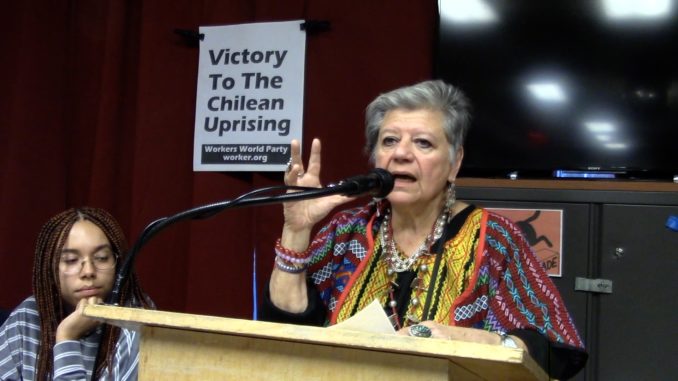 The neoliberal economic model is crumbling under the nose of the Chilean elite. [President] Piñera is the continuation of the Pinochet dictatorship. Chile is in a state of emergency, where Piñera declared that he is at war with the protesters. The military has gone out in droves, and tanks can be heard rolling down the streets of Santiago once again as in the days of the military dictatorship.

The violent reaction by Piñera toward the youth angered Chilean civil society. The young people reminded Chilean society that it is not merely about the increase of the fare, but 30 years of economic policy to privatize the whole country. Chileans are sending a warning to the world about waking up to the nightmare of the neoliberal market. Neoliberal policy privatizes education, it privatizes water, it privatizes health, it privatizes social security, it privatizes transportation, it lowers the wages of the workers to subsidize the rich. The Chilean people say, “They took away so much that they even took away our fear.”

The discontent in the country has woken to the false claims of the Chilean economic miracle. People had to face the ugly reality of vast inequality caused by the privatization and the weakening of trade unions, ecological pollution due to deregulation — a financial miracle for the 1 percent but mortal consequences for the vast majority of society and mother earth.

We demand PIñera send the military back to their barracks.

In a democracy, people have the right to protest without being shot.