School bus drivers turned out in force Oct. 29 at the San Francisco School District headquarters to oppose changes they believe will jeopardize the safety of children, whom they shepherd every day to and from their homes and schools. 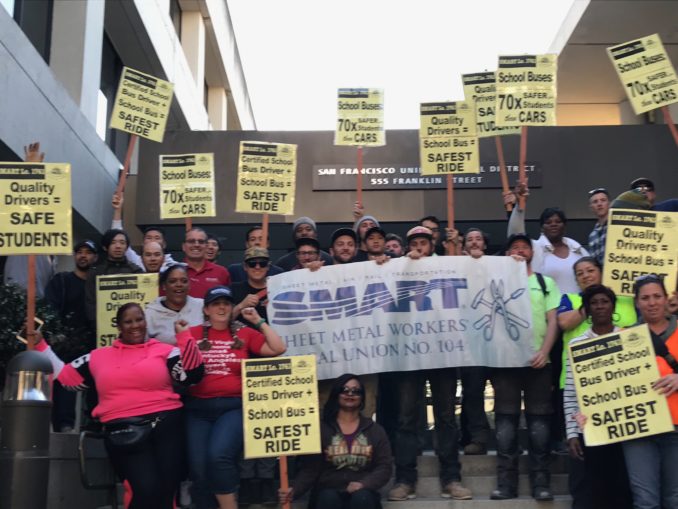 “The wheels on the bus go ‘round and ‘round, but when it comes to safety we don’t mess around,” chanted the union bus drivers from SMART Local 1741. (SMART was formed in 2008 with the merger of the United Transportation Union and the Sheet Metal Workers.) They were joined by sheet metal workers and nearly 100 other supporters, who protested outside and packed the meeting of the San Francisco Board of Education.

The proposed changes threaten to replace the familiar, tightly regulated and safe “little yellow school bus” with small unregulated vans and Uber vehicles driven by any driver with a regular Class C license. This contrasts with the stringent testing and background checks now required for certified union drivers who transport children. Many current drivers have 30 or 40 years experience and spotless safety records.

A bus driver told the board: “It’s all about sacrificing the children’s safety just to save a little money and hire ride-share drivers.” Long-time driver Shane Hoff said, “I’d hate to see a student hurt because you’re trying to save money short-term and cut corners on driver training.”

The board is set to vote on details of the school bus contract with First Student, a private company, before the end of the year.