Over 1,000 militant activists streamed into main streets in downtown Brooklyn on Nov. 1 to protest recent police attacks on people of color and young people. 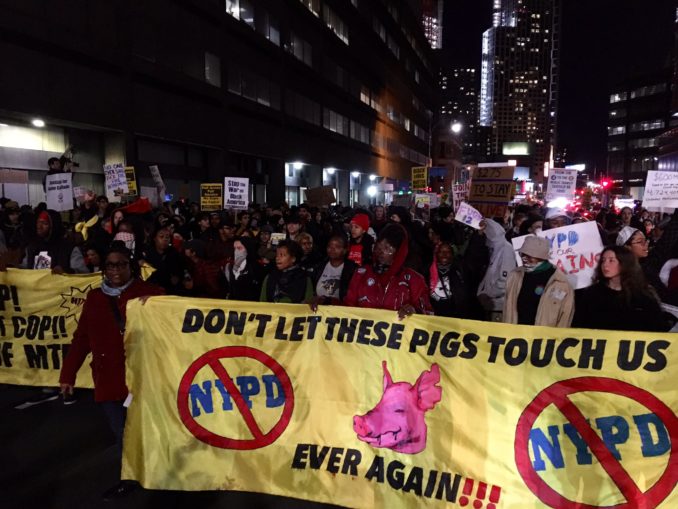 A few days before, a video went viral that exposed New York Police Department cops attacking a group of teenagers at a Brooklyn subway stop. The Metropolitan  Transit Authority, which oversees the city’s subway system, and the NYPD have increasingly targeted young working people of color for minor offenses, arresting them as they attempt to get to school and work. New York Gov. Andrew Cuomo has announced he’ll increase cops patrolling the MTA by 20 percent, allegedly to deal with “homelessness” and “fare evasion.”

The four-hour march, called by Black Lives Matter, the Peoples’ Power Assemblies/NYC and others, was an outpouring of anger at police violence. Marchers chanted, “NYPD, how do you spell racism?” and “No justice, no peace!” Protesters flooded one subway station, some jumping the fare turnstiles to assert that free public transportation should be the people’s right.

In an on-the-scene interview with New York Pix 11, Nate Peters of the PPA said: “We are here to protest NYPD violence, both in the subways and on the streets. The NYPD are modern-day slave catchers. They go around the city beating and killing people. We came out here to say, “We’ve had enough of that!” Many of the demonstrators posted “Evade” stickers from Chile in solidarity with youth there, who helped spark the current uprising by protesting fare hikes.