Nov. 2 — The 12-day national strike in Ecuador forced the Lenín Moreno government to retreat on the one issue of Decree #883, which raised fuel prices and was a direct attack on the Indigenous community, more than doubling the fuel costs of farming. Despite Moreno’s retreat [on Oct 13], this was far from a clean victory despite the strength of the mass movement. 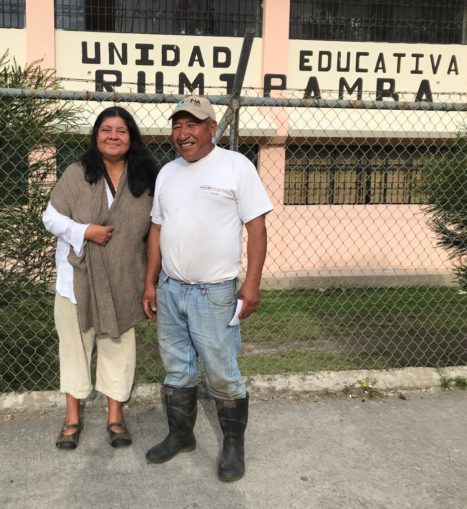 The broad movement that carried out the strike, the Paro Nacional, has no unified leadership at this time, and the government is carrying out severe repression, especially now against the Correistas — that is, the people who worked with the Citizens’ Revolution party led by former President Rafael Correa.

President Moreno vilified the uprising as an insurgency infiltrated by “violent sectors, criminals and the Correista destabilizers of democracy,” who were allegedly “part of a well-planned left-wing strategy directed from Venezuela and Cuba.” His rhetoric rationalized the persecution of Correistas, bringing legal charges against social leaders and the ‘criminalization of protest.’ ”

Rightist Guayaquil Mayor Cynthia Viteri, ex-mayor Jaime Nebot Saadi and the Ecuadorian oligarchy in general incited citizens to form fascistic vigilante squads. Although most Ecuadorians condemn anti-Indigenous racism, these home-grown terrorists tried to prevent the “Indios” they despise from invading the large farms they own, “their” city or its gated enclaves.

The prolonged strike in Ecuador and its outcome left all participants in the country and Marxist sympathizers around Latin America analyzing what happened, why, and if it would be possible to form the necessary united front to win.

Ecuadorian historian Juan Paz-y-Miño’s Oct. 28 article in the Mexican publication Nexos observed, “The events that occurred in Ecuador during the first 12 days of October 2019, have the same economic background that provoked the citizen explosion in Chile and that much earlier exploded in Haiti, the same root that has led people to support Alberto Fernández in Argentina or Evo Morales in Bolivia, as well as the gigantic citizen mobilizations in Uruguay and those that are beginning to appear in other countries. Latin America has grown tired of so much elitist privilege and of the economic model that has served as its basis.”

Paz-y-Miño also wrote: “Lenín Moreno’s government was defended and shielded by the business elites, the private media, the political and economic rightists of the country, the right-wing governments of Latin America, the International Monetary Fund (IMF), the OAS and the USA.”

The whole world witnessed the violence perpetrated by national police and armed forces against demonstrators as recorded on countless cell phones. The U.N. and human rights organizations are now investigating crimes against humanity.

Paz-y-Miño emphasized, “There was a gut reaction against the privileged economic policies [pursued for two years] by the government in favor of the country’s business elites.” Pressurized by the “shocking force amassed by the Indigenous and popular uprising … combined with the widespread support that the protest achieved throughout the country,” Moreno was forced to negotiate and to rescind the decree.

“The minister of defense (Oswaldo Jarrín) prioritized the military vision,” Paz-y-Miño noted. “He spoke of ‘threats’ and an ‘organized insurgency,’ using terms that, clearly, turn the protesting popular classes into enemies of the State and the universities that housed the Indigenous people for humanitarian reasons into suspects or collaborators for creating what the minister interpreted as ‘supply centers.’ ”

Paz-y-Miño concluded, “Ecuador has just gone through a dramatic moment, in which political confrontation clearly resulted in an acute ‘class struggle’ − to use the old and perfectly valid Marxist concept. But don’t assume that the conquest of ‘socialism’ is the ultimate aspiration of protest movements and social struggles.”

The goal instead is a rejection of IMF neoliberalism and a struggle to create a new world order “that respects social, labor, Indigenous, and environmental rights; and that forges other power relations to guarantee national sovereignty, self-determination, and [unity of the] Latin American region.”

Many who had participated in the upheavals of 20 years ago were hoping to see Moreno get on a helicopter and flee the country as then President Lucio Gutiérrez was forced to do in 2005. Rafael Correa and others were calling for the “cross of death,” which mandates the resignation of the president and the National Assembly followed by new elections.

Workers World spoke with Juan José Simbaña, the president of the October 28th Association of Indigenous Small Farmers of Chiriwasi. Simbaña risked his life confronting soldiers from the Yaguachi military base in Esperanza because he wanted to end the whole IMF paquetazo (austerity package) of which #883 was only one part. He said, “We didn’t get all we wanted, so another Paro Nacional is inevitable. It’s only a matter of time and I’m ready for it.”

Simbaña was in front of the Unidad Educativa Rumipampa building on the main street of Esperanza, a few blocks from where the confrontation with the military occurred. With profound concern he said, “My brother was one of two gravely wounded comuneros [community members]. A tear gas projectile struck him in the forehead on Oct. 4. I have to take him to Quito for medical treatments once a week, but he still can’t walk more than 100 meters.”

At least 20 other participants were hurt during the uprising when they closed the road between the cities of Ibarra and Cayambe for several days and detained four soldiers who were later freed in a negotiated prisoner exchange.

Simbaña said that he and other comuneros came from miles around to be part of the around-the-clock blockade of a bridge in the center of town. Their actions began six days before the CONAIE Indigenous movement officially convened the Paro Nacional on Oct. 9. The people accepted the risk of being martyred or maimed by the military or getting arrested on trumped-up charges.

Comuneros intended to bring down the whole government, especially the two ministers responsible for the repression.

Simbaña agrees with the comprehensive and detailed declaration of demands CONAIE originally declared. CONAIE leaders set these aside when they complied with Moreno’s request to limit negotiations to Decree #883. Simbaña was critical of CONAIE leader Jaime Vargas and other CONAIE leadership for ending the strike: “They didn’t achieve enough to justify the sacrifices we made.”

Unions, student organizations, women’s groups and mestizo peasants were never considered as protagonists by the negotiating parties, although thousands joined the Indigenous people facing state repression during the strike.

While the televised dialogue was taking place, as many as 6,000 protesters were marching in Ibarra. “Out! Moreno, out!” was chanted in every city and community in Ecuador.

To understand the government strategy, it helps to know what a historian and descendant of the Ibarra oligarchy, Enrique Ayala Mora, advised Moreno. He told him that he must attempt to divide the Indigenous nations from organized labor. A now infamous leaked conversation he had with government lackeys went viral on social media. Ayala Mora was warning Moreno to view Correismo as the main enemy of the neoliberal restoration and to blame everything on the Correistas.

The fearsome persecution of the leaders of the Citizens’ Revolution began with the jailing of Vice President Jorge Glas two years ago. Now it threatens anyone who dares to challenge the government.

Workers World also spoke with “Fidel,” who lives in Quito and is active in supporting Jorge Glas, currently a political prisoner. Fidel told us that for the past two weeks following the end of the uprising, he has stayed off the streets, expecting he may be arrested.

“We are a plurinational society that generates opportunities every day: peasants, Indigenous people, workers, micro-entrepreneurs, businessmen, self-employed workers, students, women, professionals, young people, in short, the whole society creates daily a wealth that, unfortunately, is not distributed fairly. Our proposal for an alternative to the economic model presented below proposes that the wealth that is created by all Ecuadorians be distributed equitably and that allows us to build ourselves as a free, just, democratic, participatory society that resolves its conflicts through dialogue, social peace and the search for consensus.”

Correista friends attended as observers but said they did not feel welcome to participate.

People ask why the CONAIE was established as the only legitimate intermediary between the demonstrators and the government? Argentine Marxist Atilio Borón, writing in Cuba Debate, sharply criticized the CONAIE leadership to illustrate some of the difficulties that lie ahead. “Only the leadership of CONAIE were seated at the negotiating table. It is shameful that the main target of attack would have been Rafael Correa and not the assassin who was murdering Indigenous protesters in the streets of Quito.

“The conflict between the former president and CONAIE at this juncture served to prevent Correismo, as well as other political and social forces, from joining each other in mobilizing the revolt. Moreover, the government imprisoned several of the most important leaders of Correísmo, beginning with none other than the Prefecta of Pichincha, Paola Pabón, without the least protest from the CONAIE leadership against such an attack.”

The venerable Jaime Galarza Zavala, Ecuadorian poet, journalist and partisan in numerous battles for justice, held the first cabinet post as Minister of the Environment under Rafael Correa. The following are excerpts from his most recent blog in “La Cometa”:

“Of course, it was a revolution without a head, since neither the Indigenous leadership nor the brave collectives, neither political leaders nor any party acted in accordance with the historic demand, which cost numerous lives, countless wounded and disappeared, and nearly 2,000 detainees.

“In the midst of the gloom that our country is living in and is unfolding politically, a conclusion shines brighter than the sun of the Andes, and this is it: the governments of Ecuador in the near future will not emerge from the club “La Union” in Guayaquil, nor the aristocratic salons of Quito. Neither from the chambers of industry and commerce nor from the U.S. embassy.

“The new governments will descend from the mountains to settle in Carondelet [presidential palace], of course passing through Guayaquil collecting the embrace of the new generations of Guayaquil Indigenous, no matter how much [ex-mayor] Jaime Nebot Saadi wants to send them back.

“Now, to descend from the mountains to Carondelet passing through Guayaquil, the will of the Indigenous movement and the social organizations that support it won’t be enough. Neither will the collectives, parties or leaders of civil society be able to access Carondelet by themselves and on their own.

“The lesson of these days is very clear: Either the great national majorities, the citizens unite in a great front of the homeland, in a broad democratic stream, or the IMF, the chambers and the oligarchy will continue to prevail.”