Since the middle of September, the Haitian masses have made one point over and over again: President Jovenel Moïse must leave — and take all his hangers-on and all his cronies in the Parti Haïtien Tèt Kale (Haitian Party of Baldheads) with him. 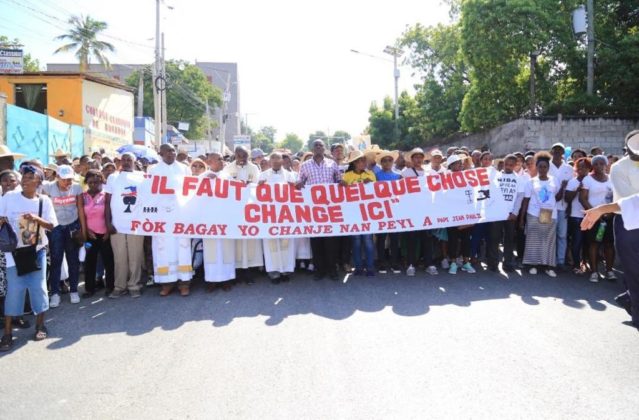 Translation of Kreyol banner: ‘Stuff has to be changed in the country.’

The masses in Port-au-Prince, and the other major cities in Haiti like Gonaïves, Cap-Haïtien and Jeremie, are living on the edge of famine, as the protests have disrupted all kinds of deliveries, including food. Many people aren’t working. Water and health care are scarce. Most schools have either never opened after the summer break or closed since.

The United States Embassy, which had a big hand in making Moïse president after receiving only 18 percent of the vote, is proclaiming its support of “dialogue” or “establishing a schedule for an orderly transition.”

But students and teachers demonstrating Oct. 25 emphatically answered the U.S., according to the online news service AlterPresse. Georges Wilbert Franck, head of a student and teachers union, said: “We don’t have to take the orders of the American embassy.” A sign at the demonstration, composed primarily of youth, read: “The voice of the people is the voice of liberty and welfare.”

Haïti Liberté’s lead article from its Oct. 23-29 edition comments on the strength of the “daily rain of demonstrations,” long and massive, through the streets of Port-au-Prince and other Haitian cities. Over and over again, the Haitian masses make the demand that, at a minimum, the president must leave.

The arrests of protesters, and the repression and murder that the cops and the “bald-headed” militias have used — between 10 and 30 people have been shot dead — have not driven people from the streets.

On Oct. 13, and again on Oct. 20, huge marches were called by musicians and artists to demand Moïse’s departure. Protestant churches also called their followers out on Oct. 20 and Petionville, a big suburb of Port-au-Prince, was overstuffed with protesters.

On Oct. 21, it was the turn of students, their parents and teachers to march, demanding that Moïse resign and schools reopen. On Oct. 22 the Catholic hierarchy, which traditionally has tried to remain apolitical, called its followers out in another massive protest.

There are more national protests scheduled for the week beginning Oct. 28. A number of coordinating committees have sprung up, with different constituencies and different scenarios for the coming transition.

But one thing is clear. The people have seized on one demand with precise clarity: Moïse must leave.