On a cold and rainy Oct. 25 in much of Algeria, tens of thousands of people came out for the 36th successive Friday demonstration. They demanded the government free all protesters the cops had arrested in previous demonstrations, plus free and fair elections, and that interim President Abdelkader Bensalah, his prime minister Noureddine Bedoui and all other corrupt holdovers from the previous regime leave office. 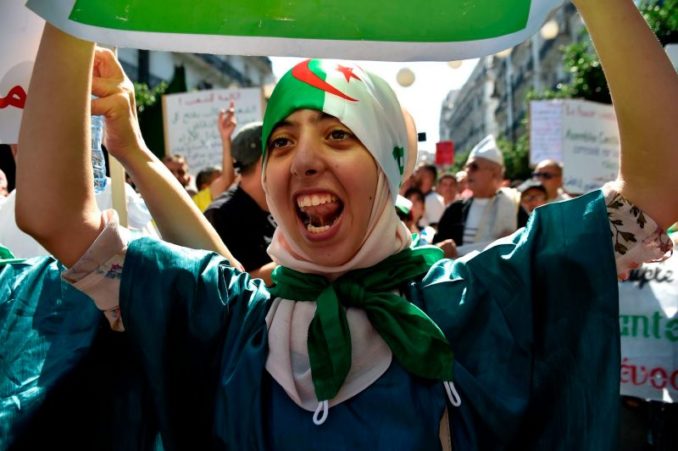 Their chants were militant and angry — “Thieves, sellouts, robbers” were the most popular invectives — and “System must go.”

The marchers had held protests through the Algerian summer’s ferocious heat, when temperatures often topped 100°F. Rain and chill were not going to stop them.

Many protesters told the press that they foresee a massive demonstration in Algiers on Nov. 1, which is the 65th anniversary of the start of Algeria’s War of Independence from French colonialism.

The Oct. 26 issue of El Watan newspaper quotes a marcher in Constantine: “We will have hundreds of thousands in Algiers on Nov. 1 to worthily celebrate the 65th anniversary of our Revolution and to demand once again the departure of the system, of Bensalah, of Gaïd Salah [the head of the army], of Bedoui and all their ilk. We will say we have had enough of the authority of generals. It is time for Algerians to have a civil state, to live in a free and democratic republic.”

The army plans elections on Dec. 12. No one from the Hirak, as the opposition movement calls itself, has filed as a candidate. The Friday protests started when then President Abdelaziz Bouteflika declared he would run for a fifth term, and they forced him out of office on April 2. The interim president canceled elections that were set for July when nobody signed up to run.

This time the army, which is running the government, scared up enough candidates, but they were all officials or retirees of the thoroughly corrupt and despised former regime. Rigged elections were the hallmark of Bouteflika and his predecessors.