Oct. 28 — Indigenous Mapuche people, students, workers, retired workers, women, people from all but the most privileged sectors of Chilean society defied the state of emergency and curfew to come out in massive protest Oct. 25, after more than a week of violent confrontations with the authorities.

In retreat, the government ended the state of emergency starting Oct. 28, sending Army troops back to their barracks. On the other side, some 100 popular organizations called a general strike (paro nacional) for Oct. 30. 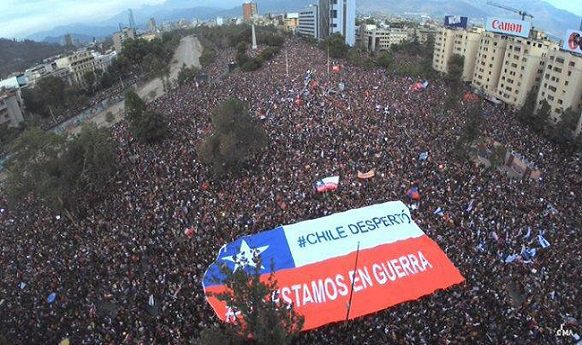 Estimates are that 1 million to 3 million of Chile’s 19 million people filled the main squares of Santiago, the capital, and other cities of the long, narrow South American country on Oct. 25. The demonstrators knew that police and/or military had fired not only tear gas — which was everywhere in Santiago — but live ammunition at the young people demonstrating throughout the week. They knew that hundreds were injured, hundreds of others arrested and some were tortured.

They knew that President Sebastián Piñera had called the protesters “bandits” and said that Chile was “at war” with them. They knew Chile’s army officers had been trained in brutality at the U.S. School of the Americas and had set up a military dictatorship in 1973 that lasted for nearly 20 years. If the people came out into the streets, it was with no illusions.

And still huge numbers came out, bringing not only a combative spirit — you can see it in the photographs and videos — but also their sense of humor while going into battle, knowing they were “the people united” and they “couldn’t be defeated.”

Before the crisis blew up, Piñera had boasted of Chile’s stability and prosperity, which obscured rampant inequality and growing poverty. He unleashed the crisis by announcing a 3.75 percent increase in the Santiago subway fares, a tiny amount of 30 Chilean pesos (less than 5 U.S. cents). (tinyurl.com/y5t8ltm3)

Young people, many of them high school students, stormed the subways and boarded trains without paying the fare. The government responded with police attacks. To the surprise of the authorities, the students fought back, and when they fought, they got the support of the Chilean working class.

Some subway stations were damaged, some buildings and vehicles burned. The president declared a curfew and a state of emergency, and police attacked the youths with water hoses, tear gas and bullets. Piñera and the pro-capitalist media demonized the demonstrators. His Minister of Economy Juan Andrés Fontaine Talavera added insult to theft: “If you wake up earlier,” he told commuters, “you can have the benefit of the lower fare.”

The people just grew angrier and sided with the students. After a week of battles, Piñera was forced on Oct. 19 to rescind the fare increase.

People now chant, “It’s not 30 pesos, but 30 years,” meaning the period since the end of the Augusto Pinochet military dictatorship. Elected governments were then reintroduced, but they maintained free-market, pro-rich economic policies. While the Pentagon helped train Chile’s military officers, free-market guru Milton Friedman at the University of Chicago trained Chile’s economists to privatize everything and impose austerity to make sure Chile paid its debts to the imperialist banks. 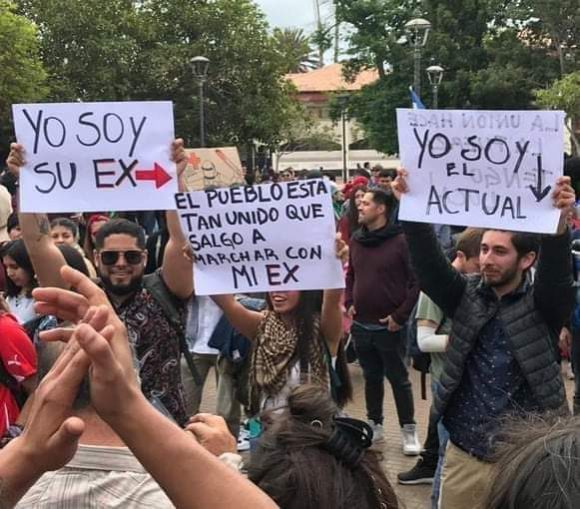 Piñera still commands the Army and the police and can order their use against the masses. According to most reports, there is no single party or organization, or even a coalition, directing the protests, which makes victory difficult. It also makes compromise difficult. The people are demanding that Piñera’s government resign and that the neoliberal inequalities end.

Chile’s elite have already shown they will resort to the most vicious repressive measures, when their theft of the workers’ labor and their pillage of the country’s natural resources are threatened.

One good sign, still only a small one, is that an ordinary soldier, David Veloso Codocedo, refused orders to go to Santiago to police the Oct. 25 demonstration. It’s a small start, but a start that at least some Chileans are encouraging by defending this soldier at his trial.

The size and energy of the demonstrations in Chile, which have reverberated throughout Latin America, have added a political crisis to the capitalist economic crisis that has begun to spread worldwide. This struggle, which is just beginning, is directed at neoliberalism — that is, the most unfettered, pro-rich capitalism. It will inevitably be directed against capitalism itself to resolve the desperate needs of the poorest workers in Chile.