In Houston, a city choked by oil refineries and regulatory capture, people are fighting back against one of the largest contributors to the climate crisis. Regulatory capture is when a regulatory agency, founded to advance the public interest, instead promotes the commercial or political aims of the industry it is supposed to regulate.

This struggle has many obstacles. Oil corporations have stacked the bureaucratic deck in regulatory bodies like the Texas Commission on Environmental Quality. When companies violate laws, putting the public in harm’s way, the worst they face is a fine from the TCEQ — and that happens less than 10 percent of the time. 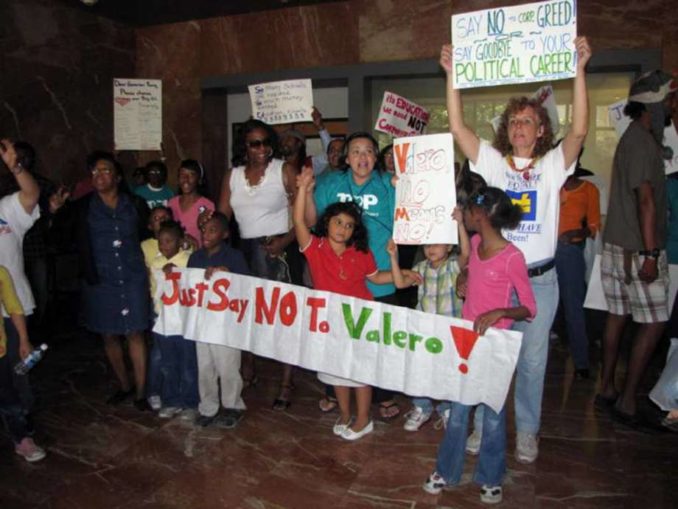 Not only are multibillion-dollar oil companies causing serious health issues and even premature death for people living near their plants, they now contribute to the substantial increase in the number and strength of hurricanes that have destroyed cities and displaced many.

Houston is particularly positioned in this struggle. The largest city in the U.S. by area, around 640 square miles; it is the fourth largest U.S. city by population. Houston is connected by massive and ever-expanding highway systems due to a rapidly increasing driving population in a city with meager public transportation.

Houston’s latest highway expansion will increase the number of already hundreds of thousands of cars on the road, causing more air pollution. Pollution has been shown to affect primarily working-class communities of color, while highways have destroyed homes and schools and displaced people in historic Black freedmen’s towns like Independence Heights.

The Houston Chronicle reported Oct. 24 that pollution after Tropical Depression Imelda, which brought 40 inches of rain in 72 hours, was particularly gnarly, although after any flood the petrochemical plants pollute with little to no consequence. “Initially, about a dozen facilities reported unauthorized releases from Sept. 18 through 21, triggered by electrical outages, the failure of floating roof tanks and equipment malfunctions caused by flooding from the storm. … Together, these companies concentrated in Harris, Jefferson and Brazoria counties reported releasing toxins, including cancer-causing 1,3 Butadiene, benzene and ethylene oxide.”

These chemicals are not safe for humans at any levels, but the companies have yet to provide any response to the people affected by them.

Oil executives and shareholders reside in Houston’s west and north sides. Most of the refineries are in the east end of Harris County, near the Houston Ship Channel. According to the Texas Environmental Justice Advocacy Services, the community directly in harm’s way includes “a dense and significant population of people of color, particularly Latinx, and low-income residents, as well as large numbers of community members who face increased vulnerability to health effects from air pollution due to their young or old age.

On Oct. 8, the TCEQ held a public hearing about Valero’s operating permit renewal number 1381, which would allow the continued release of highly toxic hydrogen cyanide at Valero Refining-Texas, L.P. in Houston’s Manchester community. The hearing was at the community center across the street from the plant.

One of the first to speak during the question and answer session, Manchester resident Armando Hernandez asked the panel of Valero and TCEQ representatives why his brother, father and friends have all gotten sick and died. He stated that Manchester residents were people, “not laboratory rats.” The panel and room were silent after his plea for help.

A teacher at nearby Furr High School, Sandra Palacios, brought dozens of her students and all their research with them to confront the panel and hold them accountable. Palacios pointed out that the permit application was incomplete — and that high school researchers are held to a higher standard than Valero. She also mentioned that the bilingual outreach for the public hearing consisted of a tiny ad in the local Spanish newspaper with an incorrect date.

Palacios’ students followed their teacher’s lead, catching Valero representatives in at least one lie over a mistake in their paper: Valero’s lead community relations specialist Michael Walter and Valero attorney Arnoldo Medina contradicted one another. A senior student, identified as Ms. Cabrera, called out Valero for not using its $93.9 billion in annual profits to have accurate frontline detectors and better means of rapidly communicating with the majority Latinx community in case of emission events.

Cabrera listed the harmful and fatal effects of multiple chemicals Valero’s plant releases regularly and warned that this was just the beginning of her and her community’s fight against both Valero and the TCEQ. She saw clearly that this struggle is not a contained one, as “air spreads out” and affects everyone — although locals feel it most acutely.

Not only do oil corporations like Valero, Exxon, Shell and many others owe reparations to the Houston residents they are poisoning and lying to, they owe reparations to climate refugees displaced by a climate crisis that is only heating up.  These egregious crimes against humanity are steeped in oil and blood.

Also heating up is the anger of oppressed peoples, who know what they are facing is unjust and fatal. But the struggle to do more than survive is a powerful one, generating the need for a new future free from fossil fuel production.