“When parents and teachers are under attack, what do we do? Stand up, fight back!” This was a very popular chant during the 2019 Oakland teachers’ strike, Feb. 21-March 1. Little did anyone know at that time that teachers and parents would be physically attacked by school and city police for opposing school closures and consolidations. 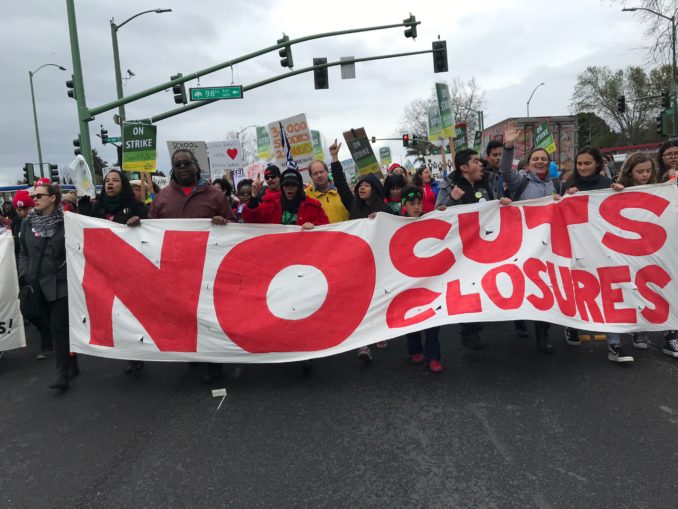 Oakland teachers strike and student support in 2018 focused politically on stopping the growth of charter schools in the district.

Unfortunately, one of the unresolved issues from the strike centered around Oakland Unified School District’s plans to close and consolidate 24 public schools. So far, the board has only targeted public schools in high-poverty “flatland” areas (leaving untouched schools in the more-privileged “hills”). OUSD’s refusal to provide quality public schools for Black and Latinx students is at the heart of this struggle. Under the coalition name, “Oakland is not for sale!” parents and teachers have united to oppose OUSD’s “blueprint.”

On Oct. 23, the Oakland school board conducted a brutal attack on parents, teachers and the community who have been actively opposing the closures and consolidations. After several weeks of protests during school board meetings, the board decided to unleash its combined police force of school safety officers and Oakland police against the peaceful protests of parents, teachers and community members. The videos of this attack clearly showed the unjustified brutality suffered by community members.

The Oakland Education Association and the California Teachers Association immediately released statements condemning this attack. The OEA demanded that OUSD “issue a public apology to our students, parents and educators for the use of police barricades, over-policing, and violence at the Oct. 23 board meeting.” The teachers’ union also demanded that OUSD stop funding Oakland police and instead fund school counselors. This demand is key to a citywide campaign launched by Oakland’s Black Organizing Project.

Many organizations, including United Teachers of Los Angeles, came out against the attack and in support of the Oakland community’s fight to save neighborhood public schools.

Greenspan is a retired Oakland public school teacher and a member of the California Teachers Association.  For more information about this struggle, go to facebook.com/oaklandnotforsale/.