Chicago teachers were still on strike in the third largest school district in the U.S. on Oct. 28.

Chicago Teachers Union Local 1 — 25,000 strong — struck on Oct. 17, and were joined by 7,500 education workers from Service Employees Union [SEIU] Local 73. The city announced a tentative agreement with SEIU on Oct. 28, but still refused to come to terms with the teachers. 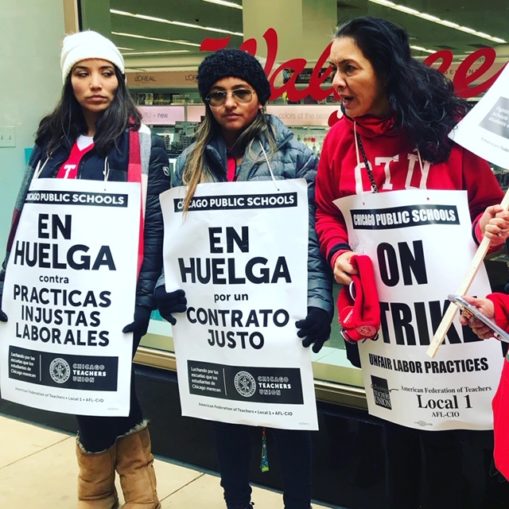 In an Oct. 8 interview with Fight Back! News, Sarah Chambers, a special education teacher and member of the 40-person bargaining committee, explained the CTU’s goals: “This strike of more than 30,000 teachers, teacher assistants, clinicians and special ed classroom assistants with CTU and SEIU is about justice for Black and Brown students. … They deserve all the support in their schools, [and] support to deal with the trauma they experience living in the oppressive, racist system in Chicago means full-time social workers, nurses and restorative justice coordinators. Our students deserve class-size caps, with special education support, more resources and fully funded schools.”

“Saturday Night Live” host Chance the Rapper used that high-profile platform on Oct. 26 to rally national support for the striking teachers in his hometown, saying “I fully support you!” A graduate of Chicago public schools, Chance was joined by three other SNL cast members with roots in the city, all wearing red CTU shirts. (tinyurl.com/yxgy9m5x)

Since 2012, the CTU has prioritized rank-and-file activism, advocating for their students and going on the offensive against school privatization and other austerity measures. The success of CTU and its militant tactics significantly influenced the Red for Ed education actions that rocked the U.S. and Puerto Rico beginning in 2018.

A week after the CTU members walked out, teachers in the Dedham Education Association in Massachusetts voted enthusiastically to strike Oct. 24, and by the next morning had set up picket lines at every school in town. Parents and other unionized city employees showed up with coffee and snacks, and other Massachusetts Teacher Association locals arrived for an afternoon rally, as did representatives of the Boston Teachers Union, the Massachusetts Nurses Association and the AFL-CIO.

Former MTA President Barbara Madeloni delivered messages of solidarity to the Dedham teachers from striking educators in Chicago and from educators who had gone on strike in Oklahoma and West Virginia.

For nearly two years, the DEA had tried for a contract with management to improve working conditions and student support. After a one-day strike and a weekend bargaining session, the teachers reached a tentative agreement with the school district on Oct. 27. (massteacher.org)

Is this the beginning of a wave of more education worker walkouts and strikes?

Watch for WW coverage, and check out the International Workers’ Solidarity Network for more news at workersolidarity.net.