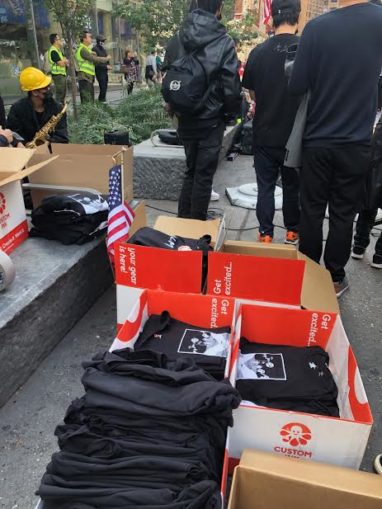 I watched as a prefab “rally in a box” about Hong Kong opened up here on Oct. 13.

I don’t know if this rally was funded directly by the notorious U.S. National Endowment for Democracy, a congressionally funded agency that plays the same role as the CIA did in an earlier period. But it featured Sharon Hom of the Human Rights in China organization. Hom actually announces on the group’s website that funding for its projects comes from NED, as well as Soros’s Open Society and Human Rights Watch. Hom is a law professor at New York University.

Alan Weinstein, founder of  NED, explained in a 1991 Washington Post interview: “A lot of what we do today was done covertly by the CIA 25 years ago. We are the sugar daddy of overt operations.”

So we can certainly ask what might be NED’s role at a Free Hong Kong rally in New York City. Funders with deep pockets were definitely needed to provide all the theatrical props, gear and anti-China propaganda I saw that morning.

The best ‘democracy’ money can buy

The Oct. 13  rally, which drew a couple hundred students, was announced on Facebook sites NY4HK and DC4HK. The location was “The Cube” on Astor Place, near New York University and Cooper Union.

The rally was scheduled to support anti-China bills due for a vote in the U.S. House of Representatives on Oct. 15. The bills, HR3289 and HR4270, were designed to set up sanctions on China, using Hong Kong as a lever.

I arrived an hour early to observe the set-up, and what I saw confirmed my suspicions. I watched as 15 to 20 matching boxes were delivered early. It looked like a rollout for a movie set!

In them were stacks of glossy yellow postcards promoting “freedom, human rights and democracy in Hong Kong” and urging support for a “yes” vote on the bills.

As I saw the sophisticated equipment rolling in, I thought how, in my 50 years of participating in and organizing many different kinds of protests in New York City and in the U.S. — from anti-racist, anti-war, community-based small events to major coalition efforts of hundreds of progressive groups cooperating together — I had never seen a political event unfold like this action.

The advance team opened box after box, pulling out crisp new signs and flags, along with black facemasks, everything still plastic-wrapped. There were new gas masks, yellow umbrellas, yellow helmets and yellow security vests. There were boxes of folded, new, black T-shirts with white silk-screened slogans. There was a cornucopia of pricey material.

A small prefab stage was quickly snapped together. Delivery people showed up with musical instruments, including wind, string and percussion, as well as folding chairs and music stands. A sleek generator powered a high-tech sound system that played the new “protest anthem” — “Glory to Hong Kong” — in repeat mode.

As people began to arrive, they were given facemasks, T-shirts and chant sheets to become “instant activists.” Out of plastic wrap came U.S. flags for them to hold and wave on telescoping metal flagpoles and “official volunteer” badges to hang around their necks

I sat and took pictures, trying to be inconspicuous. I admit I felt jealous of this incredible street equipment. The gear looked so high-tech and glossy! And delivered on site!

I thought of how I and other progressive activists spend hours designing signs, then copying and stapling them, first onto placard board and then onto cardboard tubes. I thought of the mismatched sound equipment we rig together, how we transport our gear in shopping carts on subways, hauling it up and down steps, or in dented rental vans or trucks.

And I looked at the telescoping metal flagpoles. Metal poles are explicitly prohibited in New York protests. There is also a well-known ban on facemasks. Migrant-rights activists, Antifa and Occupy forces have often been arrested for even having a bandana on their face.

At least one-third of these Hong Kong protesters were wearing full black fabric facemasks, as if they faced tear gas or any repression in this city, especially from police who conveniently and untypically were not present

I asked a few young people where they were from. They identified themselves as from Hong Kong and studying at New York University. Students at NYU and many universities have their own separate student and alumni organizations and clubs. Although Hong Kong is officially part of China, these clubs reinforce a separatist ideology.

In September, one of the Facebook groups announcing the Oct. 13 rally, NY4HK, had attempted a “pro-Hong Kong” rally in Manhattan’s Chinatown. The group was chased out by pro-China community residents.

But pressure from the U.S. federal level now makes a pro-China show of support by Chinese students far more difficult.

No police were visibly present at the Oct. 13 “pro-Hong Kong” rally, but other branches of the police state are hard at work promoting an anti-China message by attempting to intimidate thousands of students from China.

According to a June 28 NPR report, FBI agents are now busy visiting many of the 360,000 Chinese students in the U.S., reminding them that they are being monitored and should stay out of politics.

Universities are being pressured to monitor students, graduate students and visiting research professors of Chinese nationality.

This March, U.S. intelligence officials briefed about 70 college administrators in the American Council on Education, according to university participants. The officials said the presidents should increase oversight of Chinese researchers and avoid research funding from Chinese firms like Huawei.

The presidents were “skeptical of many of the claims, but many of them receive U.S. government research money.” (tinyurl.com/yytfm2s4)

The Oct. 13 rally and its staging were followed by another “pro-Hong Kong” rally on Oct. 18 at the Brooklyn Nets basketball game. Thousands of dollars must have been spent to secure nine rows with more than 100 seats in the prime Section 1 area in the Barclay Center. The people in those seats were wearing matching “Stand with Hong Kong” T-shirts and facemasks. There were also front-row seats reserved for those wearing “Free Tibet” shirts.

This was a direct challenge to Joe Tsai, the Chinese owner of the Nets — and also a challenge aimed directly at Chinese sovereignty.

All these events reaffirm a separatist agenda — by including prominent “Free Tibet” and “Independence for Taiwan” signs, as well as “Stand with Hong Kong.”

These costly “performance art” actions are actually promoting U.S. interference in Chinese sovereignty, as well as far-reaching sanctions on China.

For instance, the annual Congressional review would include “human rights charges” against China as well as trade, customs and claims about any shipments from China to the Democratic People’s Republic of Korea, Iran or any U.S.-sanctioned country.

The review, aimed at China, would determine whether Hong Kong was sufficiently “autonomous” from Beijing to justify its special trading status under U.S. law.

The bills were swiftly passed by the U.S. House of Representatives on Oct. 15 by an undisputed voice vote, with forceful assistance from House Speaker Nancy Pelosi (D-CA). The legislation is now on a fast track to the U.S. Senate.

The Oct. 13 pop-up rally in New York, along with other costly staged events, are examples of U.S. so-called democracy at its finest. Just pour on $$!

All these measures — including the congressional legislation — are designed to undermine China’s continuing efforts to advance on the road to socialism.

Now is the time for social justice and antiwar activists to speak up and demand: Hands off China! End all sanctions!