Marinelli writes often for Prensaobrera.com on Catalonia. This article was published Oct. 19 on redroja.org and translated by John Catalinotto. Some background on the events is included in a Note at the end of the article.

Oct. 18 — More than a half-million people overflowed the streets of Barcelona today, as five columns of marchers who had left from different points inside the Catalonian region [in eastern Spain] two days ago converged on the city. The marchers demanded the release of nine regional political leaders, who were found guilty of sedition and sentenced this week to between 9 and 13 years in prison for having organized an independence referendum two years ago. (tinyurl.com/yyrqs6fu)

This widespread network of picket lines was coordinated by the Committees for the Defense of the Republic (CDR), an organization that operates through assemblies in different neighborhoods. The left-wing political tendency Popular Unity Candidacy (CUP) has a major political influence in the CDR. Today the press reports that the CDR organized its own column that brought more than 10,000 people to Barcelona. 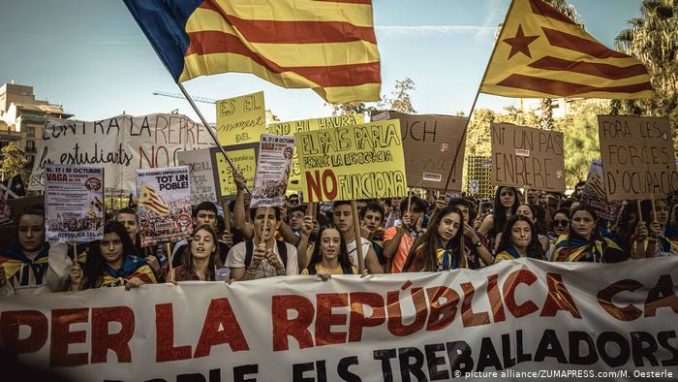 The scope of the strike

Data from the two employers’ associations of Catalonia’s small and medium-size companies show that the strike shut down more than 40 percent of the companies in these associations. According to official sources, the strike was also felt strongly in commerce (between 60 and 80 percent compliance); in education, where activity was paralyzed at all levels and tens of thousands of students mobilized; and in public administration and transport, where the strike call was followed to the extent allowed by Spanish laws that force workers to “guarantee minimum services.” These repressive rules apply to all public services.

The supermarket and gas station sector announced the closure of all its establishments. Dockers in Barcelona’s seaport supported the strike, which was strong there. Catalonia’s largest company, the automaker SEAT, had closed its plant, in which 3,500 cars are produced per day, because of “the difficulties that workers will have reaching the plant.”

The strike’s repercussions take on a greater dimension because the leadership of the two central labor confederations — the pro-Socialist Party (UGT) and the Workers Commissions (CCOO), led by the Communist Party — did not support the action, a sign these union officials align with the parties of Spanish “order.”

The Councillor of the Department of Labor of Catalonia, Chakir El Homrani, stressed that “many other people, because of their work or personal situation, have not gone to work but have not registered their strike,” given “the pressure of precarious work.” The media point out that, in the massive columns that marched toward Barcelona, “the demonstrators’ chant spread of ‘Strike, strike, general strike!’ which repeatedly merged into shouts of ‘Independence!’” (La Vanguardia, Barcelona, Oct. 18)

The other important political fact is that faced with the harshness of the official repression and the appearance of hostile pro-fascist elements, which have gone to demonstrations and have attacked people who are pro-independence, a movement of solidarity with the Catalan people has begun to appear in different cities in Spain.

An Oct. 18 mobilization in Madrid was joined by others in different Spanish cities, such as in Bilbao, in the Basque Country. And in the city of Oviedo, that same night, at the presentation of the Princess of Asturias literature prizes, a ceremony attended by kings, there was a mobilization in the street that expressed support for the Catalan struggle.

An interesting fact is that the “Classic” Barcelona-Real Madrid soccer match has been suspended (it is usually watched by millions of people around the world) for fear that it would turn into a massive rally for sovereignty and for freeing the political prisoners.

The picture of rebellion unleashed in Catalonia has put the Spanish central government in check and has triggered a crisis within the Catalan independence parties. A few days before the new general elections (set for Nov. 10), the Socialist Party (PSOE), which has not been able to form a government for months, is trying to avoid an intervention in Catalonia. Such an action could generate a greater crisis that could spread beyond the Catalonian region.

Opponents from the right (Popular Party, Citizens, Vox) question the government’s tepid reaction in the face of the popular rebellion and call for a “strong hand” and immediate intervention in Catalonia, in what also appears as a way of reducing votes for the PSOE candidate in the next elections. The PP spokesperson in Barcelona has described the strike as an “attempt at a rude and useless coup” and the leader of Citizens, Albert Rivera, as “general sabotage.” (La Vanguardia, Oct. 18)

In Catalonia, the independence front has been broken in the face of the elemental mass force that has captured the rebellion. The Republican Left of Catalonia (ERC), which forms part of the bloc, is calling for the resignation of Catalonian Prime Minister Quim Torra and calling for elections to “achieve a government that tackles the economic crisis and thus build a negotiating scenario” (with the central government). And the Catalan National Assembly (ANC), one of the organizers of today’s marches and part of the coalition of the sovereign bourgeois parties, demands the resignation of the head of the Catalan government’s Interior Councillor, accusing him of not controlling the police repression carried out by the Mossos [Catalonian police].

In this unstable situation, the center-left Podemos (We can), the third political force and potential partner of the Socialist Party to form a government (which has already divided), asked the pro-independence supporters to abide by the ruling and the government to negotiate. But the mayor of Barcelona, in the same party, played it safe and warmly greeted the pro-independence mobilizations. This is opportunism preparing for a crisis.

Together with this debacle, which has produced a dislocation of all political parties, the rebellion is taking place in the midst of an enormous economic crisis throughout Europe and Spain in particular — which includes in Catalonia itself.

For that reason, the Spanish bourgeoisie and its political and judicial apparatus harshly punished the attempt at independence, which would further undermine the state. At the same time, it seeks to strike at all manifestations of independence and workers’ and people’s struggle throughout Spanish territory.

After today’s mobilization and strike, the sectors linked to the Catalan bourgeoisie have decreed a pause in the struggle, but the resistance seems far from being brought under control. The most active sector of the CDRs has called for an indefinite encampment in the center of Barcelona.

The enormous wave of these days, which included the working and student youth in a prominent position, indicates that the crisis will be ongoing. The Catalan rebellion has triggered a process that puts on the agenda the unity of the workers of the entire Spanish state for their demands and against the capitalist, monarchical regime.

Faced with threats of the application of the national security law and of a new intervention, we [Prensaobrera.com] defend the right to self-determination of the Catalan people, including their independence, within the framework of a federation of socialist republics.

Note: Spain is a multinational country ruled from Madrid by a parliamentary monarchy since 1978, with significant movements for national self-determination in the Basque Country, Catalonia and Galicia. The dominant parties in the national parliament are the right-wing Popular Party and the centrist Socialist Party, which have alternated running the central government since 1978. Recently they have lost their predominant position and depend on alliances, with the PSOE, with Podemos and the PP with the Citizen’s Party.