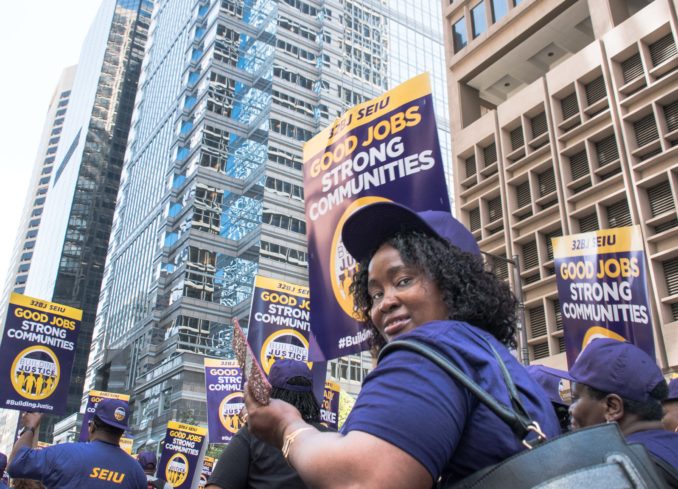 Thousands of Service Employees union (SEIU) 32BJ members held a spirited march and rally through Center City Philadelphia for #BuildingJustice on Sept. 26. Three thousand workers, who clean 120 office buildings across the city, are threatening to strike on Oct. 15 unless the wealthy owners of buildings, such as Comcast, PECO Energy Co. and the chemical manufacturing company FMC Corp., come to an agreement on a new contract.

“Philadelphia shouldn’t just be a city for the rich,” said Alisa Johnson, a cleaner and SEIU 32BJ member, at the rally. “We live and work here too. We are a part of this town too and we deserve living wages, benefits and respect. All we are asking for is for us to be able to take care of our families.”

Despite the largest commercial real estate boom Philadelphia has seen in decades, employers have proposed dramatic cuts to the cleaners’ benefits. Recognizing that most of those jobs are held by African Americans and migrants, SEIU 32BJ President Kyle Bragg said, “We are going to put a dent in Philadelphia’s high poverty rate by making sure that cleaning and building service jobs can truly become middle-class jobs.”