Some 30,000 grocery workers who were preparing to strike major grocery chains like Krogers and Albertsons in California reached a tentative agreement Sept. 8 after months of frustrating negotiations. By threatening to strike, members of the Food and Commercial Workers (UFCW) Local 770 won a contract that “is the most significant wage and benefit increase in over 30 years,” reports a Sept. 12 statement from Local 770. In addition to winning good wages and retroactive pay back to March, the workers stopped cuts to the unused sick leave payout, secured and improved health care, protected full funding of pensions, and increased minimum hours and vacation days. A “Future of Work” committee will include worker representatives in all discussions about future grocery jobs. (ufcw770.org)

Local 770 attributed winning the contract without a strike to UCFW’s strategy of organizing support store by store to win over customers and the public who responded in the thousands. The local also thanked its members and their families as well as other unions. But memories of the contentious 2003 strike also weighed heavily on Big Grocery, which lost billions in revenue over four months. (latimes.com, Sept. 9) Just another example of what a powerful tool the strike is! 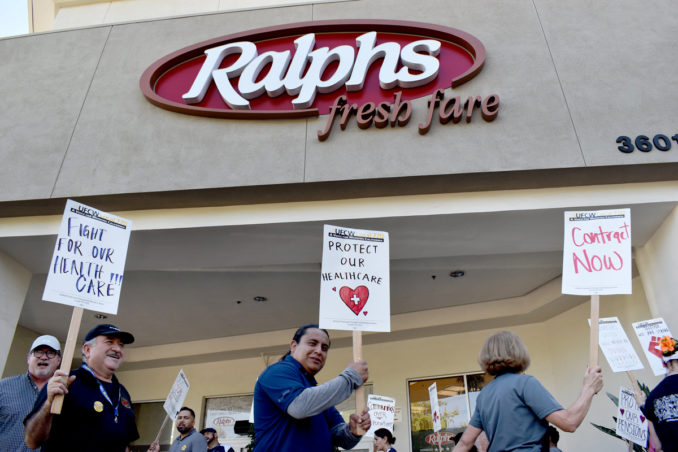 Local 555 of the Food and Commercial Workers called a customer boycott Sept. 22 of all Fred Meyer stores in Oregon and southwestern Washington where members are working without a contract. Following months of intense negotiations, the Kroger-owned stores have refused to respond to “gross inequity” in women’s pay rates (WW, Aug. 17) and unfair labor practices to “coerce workers to settle for less during contract negotiations.”

Local 555 President Dan Clay said in a statement: “We call on our communities to make sure Kroger and Fred Meyer understand our Northwest values of decency, dignity, and respect by shopping elsewhere until our members are treated in accordance with those values.” Next round of bargaining is scheduled for Sept. 26-27. (ufcw555.org, Sept. 22) Stay tuned.

Some 6,500 National Nurses United members at 12 Tenet Healthcare hospitals in California, Arizona and Florida went on a 24-hour strike Sept. 20. They were joined by more than 2,000 NNU members who walked out of the University of Chicago Medical Center that day. The NNU is demanding better patient care, based on safe and effective patient-nurse ratios, as well as higher pay and other improvements in working conditions. Nurses say current ratios are leading to burnout and inadequate staffing that makes it impossible to provide adequate care. (NY Times, Sept. 21)

In what could be an epic national strike and the largest since 1997, more than 80,000 Kaiser Permanente workers — emergency medical and biomedical techs, nurses, respiratory therapists, billers, transcriptions clerks, receptionists and janitors — are threatening to walk off the job. The Coalition of Kaiser Permanente Workers represents the union members. (Salon, Sept. 14)

Some 98 percent of the workers voted to authorize the strike, which would allow union leaders to call it as early as Oct. 1. They allege the nonprofit health care giant — made up of 39 hospitals and nearly 700 medical offices serving more than 12 million patients in seven states across the country —  has been outsourcing and automating union jobs, understaffing facilities, raising patient premiums, and is seeking to reduce wages and benefits in contract negotiations. This despite bringing in more than $11 billion in profits since January 2017 and sitting on a $38 billion reserve. CEO pay is $16 million a year! Workers have been preparing since June, when 4,000 Kaiser mental health professionals and members of the National Union of Healthcare workers started protesting. (American Prospect, Sept. 4)

Trump’s Department of Labor is trying to force through catastrophic regulatory policies affecting the H-2A agricultural guestworker program. If implemented, they’ll force down pay for both U.S. and im/migrant workers and make it easier to deny jobs to U.S. workers so bosses can hire more temporary migrant workers — and pay them less. If passed, this will be a loss for all workers. The window of public comment on the 500 pages of complex legal regulations closes Sept. 24. Take action at tinyurl.com/noDOJchanges.