A much anticipated gathering of Workers World Party members, candidates and friends met Sept. 7 in a local community center for all-day discussions on political questions, strategies and tactics facing revolutionaries in the South.

With participants’ ages ranging from 17 to the 70s and job experience from union autoworker to house cleaner, education worker and part-time wait staff — as well as a range of genders, sexualities and nationalities — the daytime meeting reflected the breadth of today’s working class.

Participants shared their experiences of organizing in North and South Carolina, Georgia, Florida, Alabama, Washington, D.C., and New York City against police killings, anti-immigrant violence, gentrification, low wages, imperialist war, anti-trans bigotry, homelessness, lack of health care, mass incarceration and white supremacy. In other words, the crimes of capitalism and imperialism were indicted by the lives and experiences of those in the room.

The format was designed to encourage the widest participation on the main topics of the day: “What is the role of a revolutionary party?” and “What does it mean to be party cadre?” 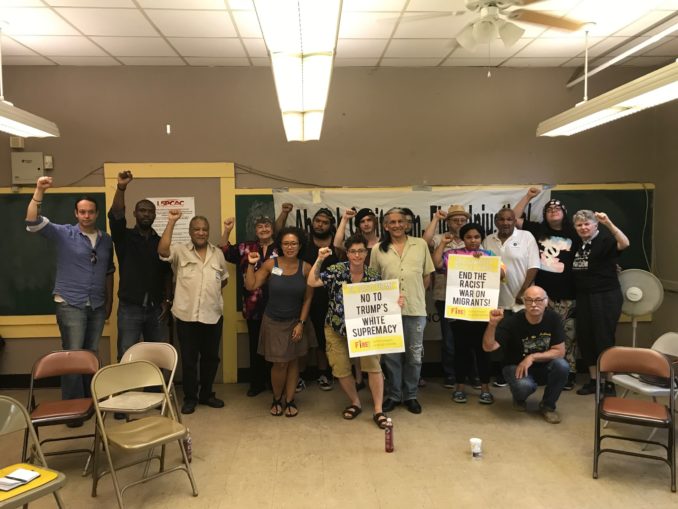 Their main discussion was on “What road to socialism?”

A public program that evening on “What Road to Socialism?” was anchored by an opening talk by Workers World Party national leader Larry Holmes. The event brought a mix of seasoned Black community organizers, Pan-African and  Latinx activists, queer youth looking for answers and those curious about socialism to a stimulating dialogue that lasted well past its planned ending time.

The meeting opened with a message of solidarity to the march and rally against white supremacy taking place at the same hour in El Paso, Texas. It was noted that a Workers World Party delegation of Texas, California and NYC comrades was participating in that community-called and -led struggle against racist anti-immigrant violence. (See the solidarity statement issued by FIRE — Fighting for Im/migrants and Refugees Everywhere — in this issue.)

As the program closed, interest in the “Road to Socialism” was confirmed by the concluding questions raised by many: “When is the next discussion?” and “How can I get involved?”