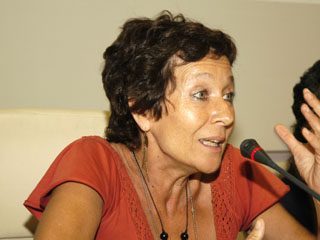 The author, a spokesperson for the organization Red Network (redroja.net) based in the Spanish state, faces charges based on her organization’s collection of funds in solidarity with Palestine, specifically to repair healthcare facilities in Gaza.

Aug. 29 — Recently, the National High Court charged two other compañeras and me with the crime of financing terrorism. The events took place in 2014 and 2015 when, on the occasion of brutal invasions of Gaza by the Israeli army with terrible consequences of death and destruction, the Red Network decided to request financial contributions to help the Palestinian people through a current account installed on its website. The facts are the same as in the documentary film “Gaza,” which received the Goya award last January.

Last June, Court Number 6 of this High Court, claiming it found “sufficient evidence of criminality,” refused to dismiss our case and issued an Ordinary Summons. Its pronouncement took place even after our defense presented a document that proved the destination of the funds in question was the reconstruction of healthcare facilities destroyed in the attacks.

The argument of the accusation made by the New York-based [pro-]Israeli organization Lawfare Project, and accepted by the National High Court as an indication of criminality, was the delivery of the first amount to Palestinian leader Leila Khaled, herself a member of the Popular Front for the Liberation of Palestine (PFLP). The rationale is that this organization has been included since 2003 in a European list of terrorist organizations. The U.S. had encouraged putting the PFLP on the list following the attacks on the Twin Towers in September 2001.

This list has not been transposed into the legislation of each EU member state, so there is no legal obstacle for representatives of this organization (PFLP) to act freely in the EU. This right was recognized in 2017 by the same National High Court, which, through Judge Carmen Lamela, rejected the complaint of Israeli organizations against Leila Khaled herself and allowed her free entry into Spain.

The PFLP is a founding member and a prominent part of the Palestine Liberation Organization (PLO), recognized since 1974 by the United Nations General Assembly as “the sole legitimate representative of the Palestinian people.”

Beyond the specifics of the case against us, the central issue underlying this whole matter is the insurmountable difficulty in finding a definition of terrorism that meets the primary legal requirement of general applicability. Countless questions come to mind.

Can resistance against Nazi occupation in World War II be considered terrorist?

The historical examples are numerous and varied, and the attempt to give to the victor or to the strongest party the right to decide who is a terrorist, as the State of Israel claims, contravenes the very basis of international law. This has been recognized in hundreds of resolutions by the United Nations General Assembly, which has always affirmed the legitimacy of the Palestinian people’s struggle.

The case against us, as well as the legal proceedings against representatives of the Boycott, Divestment and Sanctions (BDS) movement, aims to criminalize international solidarity with the Palestinian people and to assure that the daily crimes that Zionism perpetrates against Palestinians are both hushed up and unpunished.

Euro-U.S. imperialism, in desperate search for cheap raw materials, has multiplied its extortions and aggressions and has disguised them as interventions in defense of human rights, in addition insisting that humanitarian aid — alms intended to cover up the horrors created by themselves or support for refugees fleeing wars provoked by the “West” — must come through NGOs financed by their governments, their bankers and their multinationals.

What they are trying to wipe out is political solidarity that takes sides [with the oppressed]. And always this solidarity means standing against the aggression of imperialism and Zionism, regardless of the political quality of the government of the country being attacked. Internationalist solidarity is located at the very opposite end from charity, in that it considers the struggle against oppression and injustice anywhere in the world to be its own struggle.

And this attitude is especially incumbent upon the various peoples living within the Spanish state, who had the privilege of living through, up close and personally, the greatest example of internationalist solidarity, strictly political, that humanity has experienced: the International Brigades [during the Spanish Civil War, 1936-39]. With them came thousands of young men and women from all over the world, ready to give their lives to fight fascism. Arabs also arrived, and in particular Palestinians, and many Jews fleeing Nazi persecution in their countries.

The most important thing that they contributed to the struggle of the Spanish republic against fascism was not the military support, just as the essential economic aid that reached the Palestinian people through Red Roja was not in its quantity. It was the observation that, in the unequal fight against tyranny, those who legitimately fight against it are not alone.

The arrival of the International Brigades was what pulled from the people of Madrid, devastated by the bombardments and crushed by the feeling of defeat before the advance of the fascist troops, the inalienable will to struggle expressed in the cry: “They shall not pass.”

Some of that gift of internationalist oxygen must continue to reach the Palestinian people and all the peoples of the world who resist imperialism and Zionism with more force every day.