As a Muslim woman born in a rural village in Gujarat, India, I experienced Gandhi as a figure whom you were not to criticize because he was a saint who gained independence for India. Now that I live in the U.S., it has been important for me to relearn about the Indian independence movement and Gandhi’s history from a perspective that takes into account colonialism. This is what I have learned.

The modern invasion of India, a large empire with multiple rulers and a vast amount of resources, occurred from 1735 to 1833, as various Western countries and companies, including the East India Company, targeted its resources.

The rulers and people of India did not take that sitting down and did fight back. There were constant rebellions. In 1857, Muslims, Hindus and Sikhs rebelled against the East India Company after they were being fed pork and being paid low wages. The rebellion of 1857 led to direct British governmental rule of India.

During World War I, the people in India continued rebelling, especially in Bengal and Punjab, because most of the working class was frustrated by the continued taxing of Indians by the British and by changing the nation’s currency from being based on the gold standard. The working class relied on hard-won gold coins as backup for an official currency they understood was part of a financial system rigged against them.

The rebellions, the Independence Movement and the partition of Bengal (modern day Bangladesh) in 1905 inspired many different organizations in India throughout the years, from socialist and communist parties to the bourgeois Congress Party and the All League of Muslims. 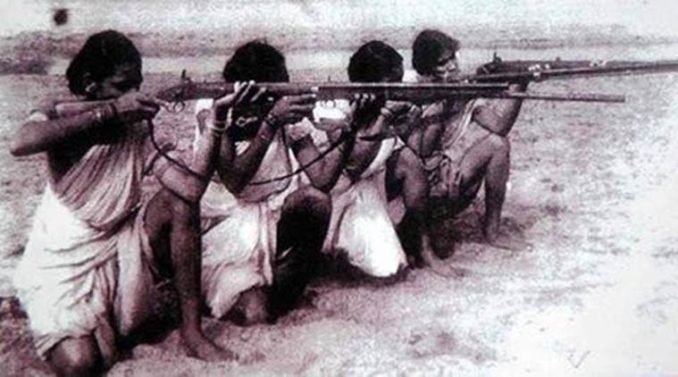 Communists led the Telangana Peasant Uprising of 1948 against feudal landlords in an India still under colonial rule by the British.

Gandhi’s role in the Independence Movement

Gandhi grew up in a poor region in Gujarat and was in the merchant caste, or Vaishyas. His education was funded by a rich priest, and he was called by a rich family to work as a lawyer for them in South Africa. There he was part of the Natal Indian Congress — a struggle against discrimination against Indian traders in South Africa. While living there, he perfected the concept of satyagraha (truth-force), also known as nonviolent direct action, in political struggle.

Both the Congress Party of India and the British noticed, approved of and encouraged Gandhi’s political direction because they did not like the rise of resistance in India, including armed resistance by the revolutionary left.  The Congress Party of India, founded in 1884, was filled with rich people who wanted to work with the British and have a cooperative, profitable relationship with them.

Similarly, Gandhi was always about having a cooperative relationship with the British on the path toward national independence. He was invited back to India by the Congress Party in 1915 to work toward that goal. The British and the Congress Party used Gandhi as “the best shield of the Congress against left-wing groups and organizations.” (“India and the Raj, 1919-1947” by Suniti Kumar Ghosh)

When Gandhi came back to India, he sparked a civil disobedience movement for which he was arrested. While he was in prison, the Congress Party continued advocating Gandhi’s message of civil disobedience to raise Indian consciousness. At the same time, the Congress Party refused to listen to Muslim and Dalit concerns about being minorities in India and wanting separate elections. This created a big divide within the Independence Movement. The All Muslim League of India was created — an organization filled with elite Muslims — which started asking for a separate state for India, eventually leading to the partition of India after World War II.

At the same time, there were various resistance movements that Gandhi tried to take over or use; the best example is what he did to the Dalits. These were the “Untouchables” — the lowest caste members looked down upon by all upper caste people in India.

Gandhi was afraid of the Dalits having any power in Congress. He was also afraid that they might convert to Islam, which in turn would give Muslims more power in the country during elections. Like the Muslim population, the Dalits were also asking for separate elections and a voice in the government, and it seemed the British might relent and grant it.

To stop this from happening, Gandhi went on a fast to put pressure on the Dalit leader, Dr. Bhimrao Ramji Ambedkar, to withdraw the demand of autonomy for the Dalits and their inclusion in the Indian Constitution. Gandhi’s fast put a lot of pressure on Ambedkar, who had to worry about Gandhi’s health or death, and also the possibility of mass retaliation against the Dalits from higher caste members.  Ambedkar was forced to arrive at a settlement with Gandhi and eventually resigned from Congress.

Gandhi also tried to appease the Dalits. With bourgeois supporters and mentors like G.D. Birla, Gandhi started the Harijan Sevak Sangh in 1932, an organization supposedly to eradicate untouchability in India, including opening Hindu temples to them. The word Harijan means “children of God” and is connected to Hindu caste rape culture where it is used to describe the children of women who are bound to Hindu temples to perform mandatory sex under the ritual system called Devadasi.

According to Gandhi, opening the temples should have been a gift to the Dalits. However, what it did was kill the civil disobedience movement for the Dalits  because it created a divide between the Congress Party and them. The Dalits understood that the temple movement wouldn’t seek the improvement of the Dalits’ political, economic and social standing like B.R. Ambedkar wanted.

The British were able to use this campaign and Gandhi as a tool to direct attention away from the larger civil disobedience campaign for independence. This misdirection also pushed the independence movement to continue to tie India to England — which was, according to Ghosh, the very thing Gandhi was brought back to India to do.

During World War II, the Quit India Movement was launched in response to the British trying to get Indians to fight for them in the war. Gandhi launched the campaign at an All India Congress meeting in August 1942 where an end to  British rule was demanded.

Gandhi and the Congress wanted immediate independence for India, while still keeping “cooperation” with England. Some other major parties like the All Muslim League, as well as the Indian ruling class that was profiting from the war, did not support the Quit Movement. All leaders of the Quit Movement were arrested by the British.

World War II expedited the movement for Indian independence, as Britain, under siege by Germany’s Nazi war drive, couldn’t continue to dominate an India rising in resistance to colonization. The fact that the British needed to get out of India as fast as possible allowed for the partition to happen.

World War II, not Gandhi, was the force that gained India its freedom.

In the West, and elsewhere, mass culture and ruling-class propaganda portray Gandhi as a hero, a nonviolent leader everyone should look up to.

In fact, Gandhi was a tool of the rich in India and of the British because he was a charismatic leader whose policies were not geared toward the working class. Most of his policies stemmed from his belief in the caste system.

Gandhi was a firm believer in the caste system in India, even though in the West people often think he was the one who brought attention to the plight of the Untouchables. He believed women were inferior and were a threat to male privilege, and a racist who thought that Black people were lower in status than the Untouchables in India.

The colonialist propaganda about Gandhi started in South Africa when a white Christian clergyman, Rev. Joseph Doke, wrote a 1909 biography of Gandhi that made him seem like a Hindu saint similar to the Christian Jesus Christ. Then, as Hindu Nationalists and the Indian bourgeoisie saw Gandhi’s popularity rise, they started spreading literature with religious connections to elevate Gandhi in any shape or form. Gandhi also used his charisma and mixed his message with his religion to call out the Hindu masses.

Myths about Gandhi spread worldwide − for instance the Rev. Dr. Martin Luther King Jr. first took inspiration from Gandhi at a time when most of the information available was this propaganda. But the perspective that King took was more related to Gandhi’s stance on nonviolence. In fact, toward the end of his life, Dr. King held on to the belief in nonviolence, but his ideology transformed into that of Gandhi’s opponent, B.R. Ambedkar.

The continued propaganda about Gandhi is harmful today because activists are told “not to resist” and to “follow Gandhi” in the path of nonviolence.

In actuality toward the end of his life, Gandhi did not appeal to the Muslims, to youth inspired by socialism, to Dalits, or even to the Hindu nationalists.

As Ghosh states, “Gandhi of the popular imagination was not who he really was. He becomes, in the imagination of the oppressed and exploited, [of] the masses, a symbol of anti-imperialism, anti-feudal struggle — the very opposite of what he was.”