With temperatures in Austin creeping just over 100 degrees, Austin Pride kicked off Aug. 10. This year, activists representing Fight for Im/migrants and Refugees Everywhere showed up at the Texas capitol building’s south steps, where the parade took a southern turn down Congress Avenue, saying, “We do not want pigs in our community.” 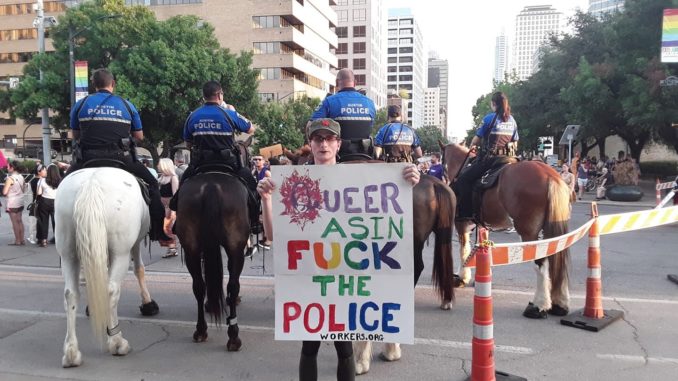 Playing music just behind the mounted cops, FIRE chanted slogans such as “Cops and borders, we don’t need ‘em. What we want is total freedom!” and “Sexists, Racists, anti-Gay, APD, go away!” Many people came up to show support and to talk about the upcoming action against Greyhound. Austin Police Department’s (APD) cooperation with Immigration and Customs Enforcement was also addressed.

Pride, a time of festivities, began June 28, 1970. The original Pride march was the “Christopher Street Liberation Day March,” named for the New York City street where the Stonewall Inn—​flashpoint for the famous uprising against police brutality—​is located. It is a time when LGBTQ2S+ people can freely celebrate themselves out in the open, rather than being rebuked. They are instead put on a pedestal or a float and enjoy a day of celebrating unconventional sexual expression and gender identities, free from the everyday oppressions faced on the streets any other time of the year.

Pride, however, like many other revolutionary movements and icons under capitalism, has increasingly become more and more embedded into the capitalist mainstream. Rather than being a revolutionary display of defiance against a reactionary system that has historically repressed gayness, gender expression or anything that doesn’t meet the neat and clearly defined cis heteronormative lifestyle, Pride has become a way for markets to expand into a new demographic. Pride has also become increasingly more policed, with dire consequences for many LGTBQ2S+ folk.

Companies started appealing to gay communities as far back as 1981 with “coded targeting,” when Absolut Vodka began running ads in The Advocate and After Dark, two magazines regularly read by gay men. Since then, other companies such as Miller Brewing Co. and Smirnoff have taken the lead in appealing to the gay community with marketing schemes.

Stereotypes of Dionysian parties, stretching long into the night, filled with debauchery and drugs, have dominated the image of gay life. But clubs were getaway spaces in a time where being out meant being out of a job, or worse, losing your life (as if that’s changed much). These companies made one thing clear: What they saw was a new market to exploit.

“If you’re not appealing to every minority community, be that racial or in terms of sexual orientation, you’re missing out on market share,” said senior editor of Adweek Robert Klara. (June 29, 2014) Thus began the assimilation of gay culture into capitalism. In a VinePair article, vice president of Smirnoff Jay Sethi said, “We do know that the Smirnoff brand is category leader with the LGBTQ audience, and we also know that LGBTQ vodka category consumption has grown year over year.” (June 8, 2018)

Recent times have seen much more ingratiation between corporate entities and LGBTQ2+ communities. Companies like Apple, Google, Indeed and a host of others have changed their logos to a rainbow alternative during Pride month to claim support for the community, but ultimately, LGBTQ2+ people will never be fully accepted under capitalism.

Leslie Feinberg’s “Rainbow Solidarity in Defense of Cuba” explains how colonialism and class society always tend to suppress gay and trans communities, often through unspeakable violence. (Free download from workers.org/books.) At least 26 trans people, mostly Black, were violently killed in 2018, as reported by the Human Rights Campaign. At least three trans refugees, including Johana Medina Leon, died or were killed shortly after being released from ICE custody.

Austin Pride has been especially sinister. Last year, Austin Pride included an APD recruitment booth at its annual festival in an effort to make their brutal police force more inclusive. 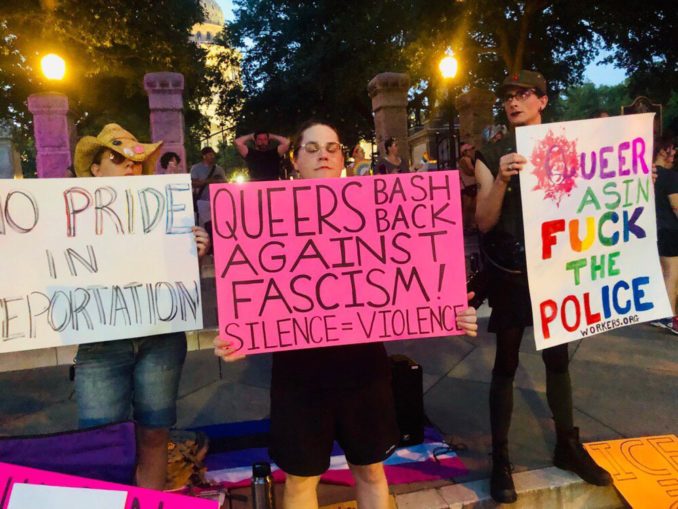 The Austin Police Department is infamously violent. APD murdered a man on July 31 in the midst of a mental health crisis. In 2016, APD shot and killed an 18-year-old unarmed Black man, who was completely naked at the time. And anyone who has ever attended a protest in Austin could attest to the APD’s willingness to break necks and leave people without treatment, as happened to someone this writer knows. Recently, it was discovered by Grassroots Leadership that Austin police were in fact collaborating with ICE and providing them with immigration status reports, despite Austin supposedly being a sanctuary city.

This year, after the recent mass shooting in El Paso, Austin Pride announced on its Facebook page that it was going to increase police presence, plainclothed and uniformed, as well as SWAT cops, sheriffs and drones as a “safety measure.” It’s hard enough for immigrant LGBTQ2+ people to exist in this country, but this is a perfect way to exclude them altogether from the one place they should feel safe and accepted. Not to mention the violent history between police and the LGBTQ2+ community. Pride Austin has not only become a capitalist playground, where it can cost hundreds of dollars to participate in festivities, but a highly militarized one at that.

FIRE’s action made one thing clear. In the words of an organizer, “We do not want or need our existence justified by just being another marketable demographic—​but that our right to exist is intrinsic and that police are a real existential threat to that existence, and we do not want them in our spaces. Needless to say, an event which was once meant to commemorate the Stonewall uprising would doubtless now have [Stonewall Uprising leader] Sylvia Rivera back up in arms.”