Shortly after Donald Trump was elected president in 2016, shares of CoreCivic Inc. and GEO Group (CXW and GEO on the stock exchange) shot up 21 and 43 percent, respectively. The two companies controlled 85 percent of the private, for-profit prison industry.

Today, facilities run by these two companies hold around 75 percent of im/migrant detainees. CXW and GEO own many of the detention centers near the U.S./Mexico border; their government-guaranteed profits average $3,000 to $4,000 per detainee.

Fueled by mass deportations and detentions of migrants, these companies’ stock prices have skyrocketed. Yet in June 2019, due to campaigns by im/migrant solidarity activists targeting their funders, stock values plunged nearly 30 percent. 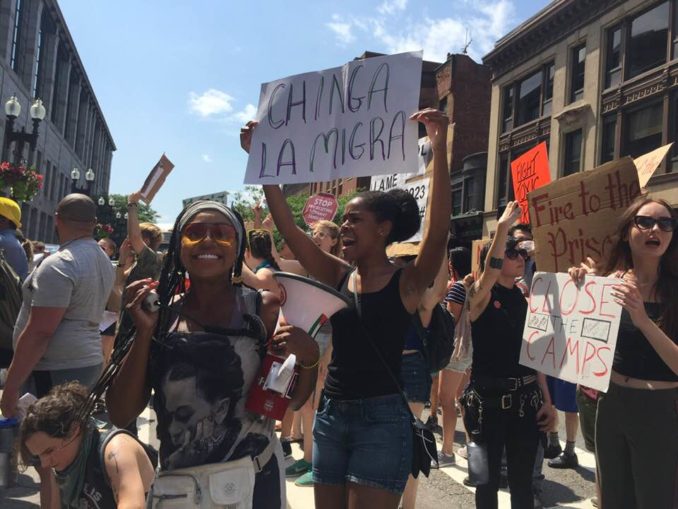 CXW and GEO operate as Real Estate Investment Trusts (REITs), which raise money from investors in exchange for providing access to real estate. REITs are exempt from corporate income tax, an arrangement which has encouraged private prison expansion for over two decades. However, as REITs, they are legally required to distribute at least 90 percent of their income to investors, which limits cash they have on hand. Thus, CXW and GEO depend on short-term loans and lines of credit, making them vulnerable to pressure on their investors and financiers.

Knowing this, activists attacked the industry where it hurts the most — pressuring banks, investment firms and pension funds to divest. JPMorgan Chase and Wells Fargo halted current and future financing to for-profit prisons in March 2019. In June and July, Bank of America, SunTrust Bank, BNP Paribas and Fifth Third Bancorp followed suit, while agreeing to meet loan obligations until maturity. PNC Bank, Barclays and U.S. Bank have yet to publicly commit to divestment.

CXW and GEO stand to lose 72 percent of private financing (estimated at $1.9 billion) as banks divest due to pressure from anti-ICE (U.S. Immigration and Customs Enforcement) activists, according to the Center for Popular Democracy. (Truthout, July 23)

Around 20 union pension funds have an estimated $67 million invested in CXW or GEO. Many are public pension funds that tout “environmental, social and governance (ESG) principles.” The California Public Employees Retirement System, the California State Teachers’ Retirement System and the Oregon Public Employees Retirement System are investors in CXW and GEO and are all ESG proponents. Borrowing from the historic divestment movement that weakened apartheid in South Africa and the current Boycott, Divestment and Sanctions movement against Israeli apartheid, activists will likely call on union members to demand divestment from these companies.

Legislation is pending in New York state that would ban state-regulated banks from owning prison stock.

Increasingly there are signs that workers — unionized and unorganized — are uniting against Wall Street corporations that profit off the suffering of im/migrant workers.

Palantir Technologies, a surveillance company that makes millions in profits from ICE, has come under increased pressure from tech workers and activists in several cities to stop profiteering from asylum seekers’ suffering. Workers at Microsoft and Amazon have protested their companies’ ties with ICE.

Pressure from employees at public relations giant Edelman resulted in the company cancelling a contract to boost GEO’s public image in Florida. Work had been scheduled to start in July. As one of the world’s leading public relations firms, Edelman feared risking a public relations crisis.

Hundreds of workers at Wayfair headquarters in Boston walked off the job June 26 in protest of their company’s contract to furnish a Texas migrant youth detention center. They were greeted by a solidarity gathering of over 3,000 people.

In July, several hotel chains, including Marriott, Hilton, Choice Hotels, Best Western, Wyndham, Hyatt, IHG and MGM Resorts, released statements claiming they did not want their facilities used to detain migrants in transit to detention centers. The hotels were bowing to pressure from their employees’ unions, as well as customers.

CREDO Action gathered over 120,000 petition signatures for this effort, while launching a phone campaign to call the corporate headquarters of Best Western, Red Roof Inn and Radisson, which have yet to respond. The petition is available at #nohotelsforice.

In a Teen Vogue op-ed published May 13, Natasha Uhlmann called on young people to get educated about ICE, in particular its impact on Black migrants. She urged them to become activists, push back against ICE tactics and boycott corporations that profit from ICE contracts. Uhlmann notes that young im/migrants are “paving the way through bold acts of resistance.” Her important message should resonate with all generations.