Since the first year of the Trump administration, the U.S. Customs and Border Patrol has questioned and detained bus and train travelers with increasing frequency.

Mercedes Phelan was profiled by the CBP while riding a Greyhound bus in Pennsylvania in April 2018 and again ten months later on an Amtrak train in Syracuse, N.Y. In a June 5 NBC interview, Phelan, who is Black and Puerto Rican, said: “I was super angry because [they were] obviously profiling. They literally skipped over every single white person,” stopping only at people of color to ask: “Are you from here? Do you have papers?” (tinyurl.com/yxjsb3xs)

These searches are conducted all over the U.S. and happen as often as three times a day at some Northern bus stations. In the past few weeks, CBP agents have been at Greyhound bus stations across Miami-Dade and Broward counties in Florida, asking riders for “proof of legal status.” On July 12, immigrant activists posted an alert that Immigration and Customs Enforcement was checking identification at the 1, 2, 3 subway lines at 72nd Street in New York City.

The CBP interprets its authority to stop, question and search “within a reasonable distance from any external boundary of the United States” as permissible within 100 miles of any land or water U.S. border, north or south. This is a massive area that contains more than half the U.S. population and includes all of New England and Florida and most of New York state.

So-called “transportation checks” aren’t new. Immigrant rights groups have struggled against them for years, with the American Civil Liberties Union and activists describing the checks as unlawful racial profiling as far back as 2011. 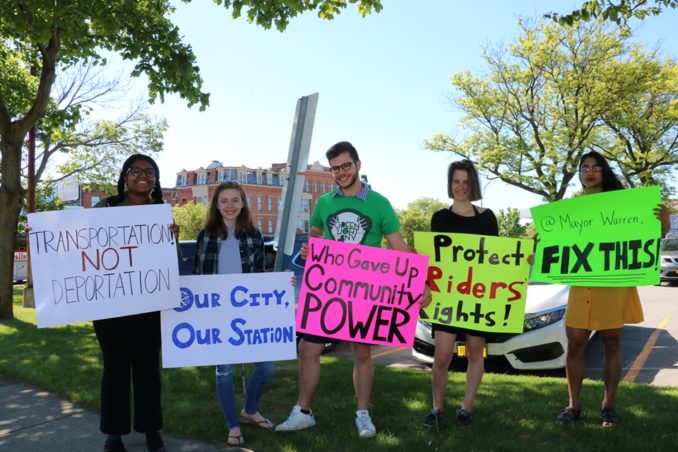 Immigrant rights activists are fighting back against CBP harassment and arrests on planes, trains and buses. The Syracuse Immigrant and Refugee Defense Network and the Rochester Rapid Response Network regularly post up-to-the-minute Facebook warnings for travelers.

Recent alerts include: “Video taken by our member [RRRN], April 16, at the Amtrak Depew Station. nearest to Buffalo, N.Y. Border Patrol boarded the train and harassed and racially profiled passengers. They detained one passenger. Member ensured passengers knew their rights and told the person being detained they didn’t have to answer questions.” “July 18, Border Patrol present at the Rochester Airport. CBP is checking ID with TSA agents.” “July 31, CBP agents standing at turnstile of Rochester Amtrak station.”

The struggle for access to transportation gained a victory in June when the New York state legislature granted undocumented workers the right to a driver’s license. The Workers’ Center of Central New York in Syracuse was central to this “Green Light NY Driving Together/Luz Verde NY Manejando Juntos” campaign. Routine traffic stops regularly lead to arrests and deportations of Black and Brown immigrant workers.

Bus company behemoth Greyhound says it is “forced to comply” and allow CBP and ICE to board, interrogate and arrest passengers. But the ACLU notes that Greyhound actually has “a Constitutional Fourth Amendment right to deny CBP permission to board and search its buses without probable cause or a warrant.” (tinyurl.com/y2xq8aml)

Now, as state attacks on im/migrants accelerate at a brutal rate, the struggle is ramping up to get Greyhound to stop cooperating with ICE and CBP. New national groups like FIRE (Fight for Im/migrants and Refugees Everywhere) and the International Workers’ Solidarity Network (IWSN) have joined the fight, saying this racist, anti-immigrant profiling must stop. (See separate article.)

Tell Greyhound: ICE and CBP, off the buses! Sign petition at bit.ly/ICEoffBuses.